This is like saying “homemade terrorism,” almost always made for export, only this time the three cups of broth were in the halls of the U.S. Congress 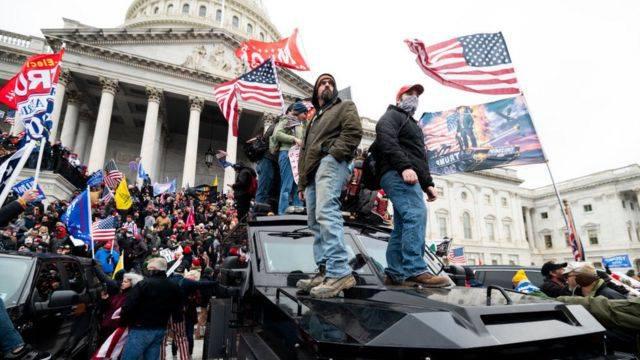 This is what Joe Biden called the occupation, by force, of the Capitol in the United States. This is like saying “homemade terrorism,” almost always made for export, only this time the three cups of broth were in the halls of the U.S. Congress.

But this act of “domestic terrorism” had an agitator: Donald Trump, the president who reluctantly leaves the White House chair.

After that disaster, he called them intruders. The fact is that they played their part, or left the script; they no longer serve the game of lies; the change in attitude reminds us of the scene of the president throwing rolls of toilet paper at a Puerto Rican crowd after a hurricane on that neighboring island.

And it all happens in a country that extends the Cesarean finger to give or take life, issue certificates of democracy, or make spurious lists of countries that sponsor terrorism. Now they have no other honorable way out than to tear up the nomination sheet and sign up first.

However, President Trump only uncorked the bottle full of old demons: one of the flags that was carried by the “domestic terrorists” carried the symbols of 19th century slavery and racism.

José Martí, who lived in that country for 15 years, observed with concern the division and hatred. He learned of a marriage that was stoned to death because it was a white woman married to a black man. He saw children selling newspapers in the cold of New York. He saw the struggles between Democrats and Republicans and the role of money in the elections. He felt with pain the separation between rich and poor, and the imperial appetites for devouring other peoples. He did not hesitate to affirm that the United States of America was not the model to follow for the emerging Republics of Our America, since that giant already had feet of clay.

The images of the assault on the seat of American democracy confirm the future of José Martí’s thinking, that which opens the door to the spirit of Lincoln and closes the way to the dangers of the adventurer Cutting, the ancient face of those who now feed the supremacy of some men over others.

Many of those who attack Cuba, and tear their clothes in the name of freedom, now keep a strange silence. They turn their faces away, as if this matter were of minor importance, something very domestic that does not deserve to raise its voice, much less to fill its head with ashes.

Only this time, from the pages of Don Quixote, an old certainty jumps out: “The truth thins, but does not break, and always walks on the lie like oil on water”. This is one of the realities that floats: the shamelessness of “domestic terrorism”, made in the very house of the empire.

Related information
Assault on the Capitol: “democracy” in the U.S. again in question

1 year ago Granmaterrorism, US politics, US Society0
The containment of the "popular wall"Polarization and a repressive environment