During the fraternal meeting, both parties highlighted the good state of bilateral relations, which will reach their 120th anniversary on May 20, and expressed their willingness to continue deepening the bonds of brotherhood that unite us. 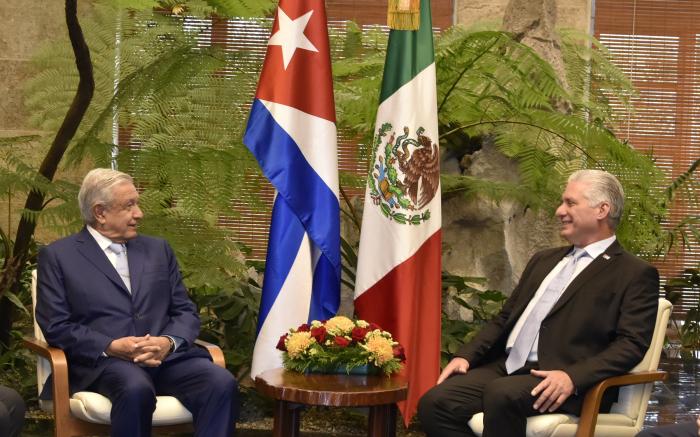 The President of the Republic of Cuba, Miguel Díaz-Canel Bermúdez, held official talks on Sunday with the President of the United Mexican States, His Excellency Andrés Manuel López Obrador, who is on a working visit to our country.

During the fraternal meeting, both parties highlighted the good state of bilateral relations, which will reach their 120th anniversary on May 20, and expressed their willingness to continue deepening the bonds of brotherhood that unite us. They also acknowledged the positive progress in economic-commercial, investment and cooperation relations, and ratified the will to continue strengthening these ties, taking advantage of the potential of both countries.

The Cuban President thanked Mexico for its historic support in the battle to lift the US economic, commercial and financial blockade against Cuba. The meeting was also an opportunity to highlight the existing cultural ties between Cuba and Mexico, which have deepened with the participation of the Aztec nation as the guest of honor at the 30th Havana Book Fair.

From the hands of President Díaz-Canel, this Sunday López Obrador was also awarded the José Martí National Order, the highest decoration granted by Cuba, for which he said he felt honored and grateful.

Díaz-Canel reaffirmed to his Mexican counterpart that “this was a desired, expected and longed-for visit, in which we can convey to him all the admiration, respect and affection you have here, for your expressions and gestures toward the Cuban people.

President Andrés Manuel López Obrador replied that it could already be, as writers say, a commonplace to talk about the friendship between Cuba and Mexico, but that he was here to reaffirm the brotherhood and solidarity between both peoples.

The Mexican President arrived in Cuba at dusk on Saturday, and accompanied by the Vice President of the Republic, Salvador Valdés Mesa, he began the Sunday day with the laying of a wreath at the monument to José Martí, in the Plaza de la Revolución.

Martí, he said shortly after, “I admire him as much as I admire Bolívar and our Juárez”.