Home Culture of Violence in the USA

Culture of Violence in the USA

Culture of Violence in the USA:
More Guns Than People

@granma.cu.Translated and edited by Walter Lippmann for CubaNews. 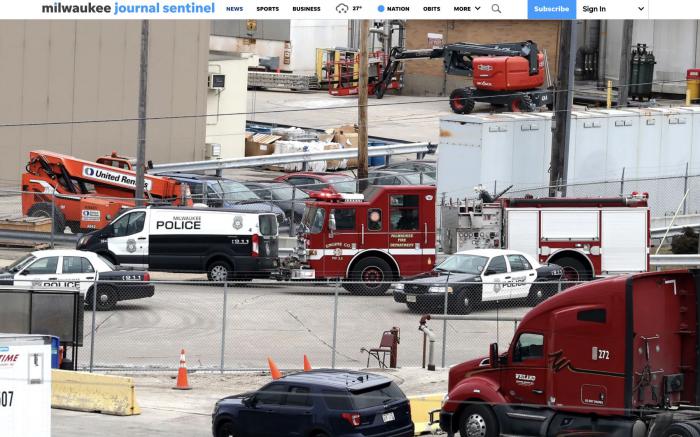 Police cordoned off the area of the incident in Milwaukee, where a shooting left seven people dead.
Photo: Milwaukee Journal Sentinel

Once again, firearms are the protagonists of a painful act of blood, pain and death in the United States. A shooting, which took place on February 26 in the city of Milwaukee, Wisconsin, has so far left seven people dead. According to local police, among the dead is the attacker, who was apparently a former employee of the Molson Coors brewery, where the incident occurred.

“This is heartbreaking. My heart goes out to the Molson Coors employees, their families and the entire Milwaukee community. The Criminal Investigation Division of the Department of Justice is on the scene and will continue to assist local authorities with whatever they need,” tweeted Josh Kaul.

Police have cordoned off the area of the incident. Nearby businesses and enterprises in the area were closed as a result of the shooting, the fourth of the year in the United States, which has so far claimed 12 lives.

The last such event in Milwaukee was in August 2012, when a white supremacist terrorist killed six people.

Former U.S. Vice President Joe Biden, a Democratic nominee for the U.S. presidency, recently devoted most of his speech at a Democratic gala in Las Vegas to harsh criticism of the National Rifle Association and gun manufacturers, promising to hold them accountable if elected President.

After lamenting the “carnage in the streets,” according to El Nuevo Día, and the anguish of families who lost loved ones to gun violence, Biden said he will not rest until they can sue gun manufacturers and ban assault weapons.

Joe Biden misquoted statistics on the number of Americans killed by gun violence since 2007. The mistake occurred while discussing gun control during the Democratic debate in Charleston, S.C., on Tuesday, Feb. 25, when he spoke of more than 150 million Americans killed by guns that year, according to Hispantv, a figure no doubt exaggerated in the midst of the debate for the Democratic nomination. But it reflects the plight of the American people in the hands of unscrupulous gunrunners and politicians who make a career out of suffering and death.

Official figures show that in 2019 there were 44 shootings that left 224 victims. However, a report by the Gun Violence Archive (GVA) handles much higher statistics that not only refer to deaths caused by single shooters, but to all deaths from firearms.GVA notes that at least 38,730 people were shot dead. Of these, 14,970 were victims of homicides, murders, intentional shootings or use defensive, a number very similar to that recorded in 2018, which was 14,789.

The nonprofit group, which documents firearms incidents across the country, counted 23,760 suicides involving some type of weapon.

He points out that there are also fatalities in family disputes, crimes of passion, gang fights, assaults and robberies, and from firearm accidents.

The areas where most of these incidents occur are Louisiana, Mississippi, North Florida, Alabama, Georgia and South Carolina, followed by North Carolina, Virginia, West Virginia, Maryland, the District of Columbia, Pennsylvania, Delaware and New York, according to the gva report.

In the United States, there are approximately 200 million to 350 million firearms in the hands of citizens; however, these figures are highly inaccurate, due to the lack of a national census and federal documentation of control of such weapons.

The ease of acquiring almost any type of firearm and the state laws that allow its carrying and use, plus the culture of violence, rooted in the foundations of the nation, are the main causes of the high number of fatalities.