Posted on August 29, 2015 in News, Politics,
The following is a hurriedly-unrevised Google translation. 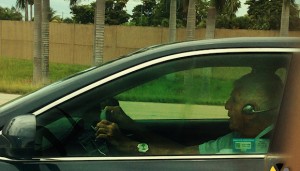 PHOTO CAPTION: Luis Posada Carriles driving his car in Miami.
Luis Posada Carriles, mastermind of the bombing of the Cubana de Aviacion where 73 passengers aboard including several young athletes, died in 1976, suffered a serious accident in his car in Miami and is hospitalized.
According to media reports in South Florida, Posada Carriles suffered three broken ribs and a collarbone, also has a wound in the arm, produced during an accident while driving his car.
Acquitted in 2011 of 11 counts of perjury, fraud and obstruction of proceedings by a court in Texas migration that took its case, Posada Carriles enjoyed a peaceful retirement in Miami, despite the profuse evidence of his involvement in the crime of the plane Cuban and a campaign with bombs in hotels on the island, which killed a young Italian tourist in 1997.
The terrorist, who also has Venezuelan citizenship, is claimed by the government of Venezuela, where he planned the bombing and escaped where, 30 years ago.
Posada Carriles escaped from a Venezuelan prison after costumes used during night shift guards and a fake passport, dyed hair and hair pieces to escape the August 18, 1985 whiskers.
Then he fled and moved to Honduras, Guatemala and El Salvador, where he supported the activities of the counterrevolution in Nicaragua, among other actions in Central America.
The history of known terrorist and CIA agent since1960 includes organizing an assassination attempt against the historical leader of the Cuban Revolution, Fidel Castro, when he made an official visit to Chile then President Salvador Allende.
In his capacity as a fugitive from Venezuelan justice, the mercenary continued their terrorist actions and appears as the mastermind and organizer of a series of bombings against hotels in Havana in 1997.
These facts were publicly acknowledged a year later in an interview with American newspaper The New York Times.
He also orchestrated a new attack against Fidel Castro, this time in Panama, where the Cuban leader was in November 2000 to participate in an Ibero-American Summit.
The action was frustrated and Posada Carriles arrested with Gaspar Eugenio Jimenez, Pedro Remon and Guillermo Novo-all notorious criminals-for conspiring to assassinate Cuban dignitary.
After a long criminal proceeding, the terrorists were convicted of the attempted bomb attack on the life of Fidel Castro, but on August 26, 2004 received a pardon issued by Panamanian President Mireya Moscoso, in the last days of her administration.
In 2005 he entered the United States and soon after was arrested by immigration problems.
Released on bail on April 19, 2007, Posada Carriles was released in April 2011 by a jury in El Paso, Texas, which ignored all the evidence and acquitted him of the charges brought by the US government.
Since then, only having been judged as a liar and not as murderer, he walks around freely on US streets.
Aug 30, 2015Walter Lippmann
Source :
El terrorista Luis Posada Carriles sufre accidente en Miami