That seems to be the feeling when the government takes a defining step: restructuring the debt burden that binds it to the IMF and private creditors 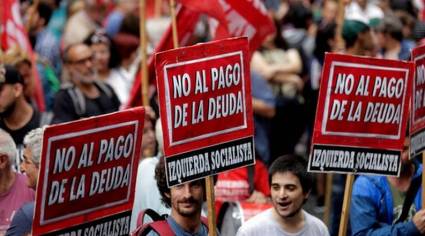 With the certainty that reason instills, the new Argentine government has already stood on its feet and is preparing to take the first and most important step of the beginning of its term, from which everything can be defined.

The renegotiation of the foreign debt in which Mauricio Macri’s government was trapped is essential to achieve the goals that the Frente de Todos wants to achieve in Argentina.

The urgency is understood in a simple way, and not only because the term will last only four years. It is not possible to walk around while a bundle of more than 280 billion dollars owed to private holders and the International Monetary Fund (IMF) is being dragged along. This is not only because the bundle of bills weighs too much: if each disbursement is not made within the established time frame, the country would be declared in default -that is, in cessation of payment- and then the world would indeed cut off the Argentines’ water and electricity.

The official start to get “relief” has been the first meeting of the young Minister of Economy, Martín Guzmán, with the private creditors; a meeting that took place this week at the Council of America in New York, and from which not all the businessmen came out very happy, according to certain sources that, perhaps, want to see things only from the dark side.

The headline, said the complainants, did not provide details of the “offer” to renegotiate, let alone the fiscal plan to be implemented by the Argentine government. Do businessmen have to control what the executive will do?

In any case, Guzmán had already given the details before leaving for the meeting. They are the same ones that President Alberto Fernández announced when he was still a candidate.

At that time, the president warned that, from now on, he would not borrow another dollar. And that, before paying, the first thing would be to resume growth.

At this point, it is clear that what Argentina is seeking is to “re-profile” the payment schedule, a term used to replace the familiar word “renegotiation,” and that it has different conceptual nuances because the nation does not aspire to “quitas,” that is, to a reduction in the nominal value of debts. What is sought is a restructuring -another current definition- that allows for the postponement of maturity dates.

The position is one of unquestionable technical reasoning: how to pay if the country does not produce, perhaps by asking for more debt, as Mauricio Macri did?

But Fernandez’s path, which Guzman follows, also carries with it a sense of national sovereignty that cannot be ignored if the economy and the country are to be brought to fruition.

“The economic program was designed and executed by us (…) What is ours is ours,” said Martín Guzmán before leaving for the United States, when asked about the expected negotiations with the Fund.

The security with which the holder conducts himself is not surprising. First, because it has been the international financial institution’s conditioning – in exchange for the credits granted to Macri – that has caused things to be the way they are again: unemployment triggered by state layoffs and the bankruptcy of small and medium-sized companies, a slowed-down economy, less purchasing power that made food shortages and in some cases hunger resurface, pension cuts, job insecurity, rising gas and electricity prices, and a long list of other similar things everywhere this neo-liberalism is applied in blood and fire.

Secondly, because Guzmán is not an upstart. He has worked for several years alongside the Nobel Prize winner in economics, Joseph Stiglitz, and has become an expert precisely on the issues surrounding sovereign debt.

“He is the right man at the right time (…) A brilliant and knowledgeable economist who can combine youthful vigor with experience beyond his 37 years,” Stiglitz said at the time.

On the other hand, prestigious economists who look at things from a more political angle and located in the Third World, such as the Belgian Eric Toussaint, say that Alberto Fernandez’s executive has all the arguments not to pay, because the Fund violated its own technical requirements by negotiating with Mauricio Macri the delivery of the largest credit that the institution has ever approved ($ 57 billion), even knowing that, even then, Argentina had no possibility of paying it back.

Some consider that the IMF followed Donald Trump’s instructions to support Macri; but others consider that the purpose was to tie Argentina back to the International Monetary Fund, as it was from the mid-1980s until the recovery achieved with Néstor Kirchner as of 2003, after the renegotiation of the debt at that time and the break with the dictates of the IMF. This would make the country “more manageable”.

Now some fear the interests and influence that Trump could have on the attitudes that the Monetary Fund adopts when negotiations are opened.

Many concerned people
Although it was routine, this week’s meeting in New York had nuances of urgency. The first debt repayments to the private sector are knocking on the doors, and the country’s coffers are empty.

In spite of the premiere flavor of the meeting with 50 bondholders who represented, according to what happened, 40 percent of all private creditors, there were already other meetings, especially with the IMF.

The Fund disbursed and now does not lose any footprint to the country. As soon as the primary elections (PASO) showed the possibility of a Peronist triumph in October, its officials went to sound out the ground and meet with Fernández.

More recently, the president himself spoke with the new head of the institution, the Bulgarian Kristalina Georgieva; and then the Minister of Economy who, it seems, left the interview with more satisfaction than regret, in accordance with his belief that the IMF “has changed”.

Now Martin has just met with two of its top officials, and will return to the dialogue with Georgieva in February. Both of them are protected by the good wishes of Pope Francis, because the meeting will take place during the presence of both of them in the Vatican.

What follows will not be easy. Argentina aspires to postpone the payment terms without taking away – as is required, moreover, by a loan as large as the one Macri squandered – but, according to the monitary fund manuals, to grant this postponement, the nation would have to assume commitments… And Buenos Aires insists that there will be no more recipes.

“We are not going to allow any conditionality,” said the head of Economy.

A united front
Perhaps one of the best things about the Argentine position is the unitary way in which it is forged and sustained.

Four days ago, in an unprecedented debate, the Chamber of Deputies approved almost unanimously, even with the backing of the legislators of the now-opposition Juntos por el Cambio, a bill that empowers the executive to renegotiate the debt in dollars with foreign private creditors.

It is expected to become law when the Senate debates it next week and, although the text limits the government to setting the terms of the negotiation, the strong support it received from 224 votes to two with one abstention also gives strong moral credit (and not just official authorization) for the government to act.

In any case, nothing seems to have been left “to the good Lord”. While with the private ones the executive is left free to act, it will go as a team to the negotiations with the International Monetary Fund. A team will accompany Guzmán in the preparation of the proposals for this procedure: the most difficult.

The new body is called the Unit for Technical Relations with the IMF. Its mission will be to assist the Economy Minister in the “formulation and execution of the strategy” of these links and, according to the Argentine press, the one who formulates the proposals.

There seems to be a growing consensus on the perniciousness of loans and debts, judging by the loud applause that followed the intervention of Maximo Kirchner Fernandez, head of the Frente de Todos party in the Chamber of Deputies, during the discussion of the law passed there this week.

“What we have to say here is “never again” to the foreign debt, and to start elaborating, among all of us, an economic policy that will eliminate, from now on, this kind of problem of the Argentine society”.

This is the second time in that nation that such a challenge is faced. And the bidding has just begun.