A second inauguration on January 20th?

A second inauguration on January 20th?

Outgoing President Donald Trump is organizing a “second inauguration” online at the same time that Bidel will take his oath of office and officially begin the term of 46th U.S. President, Democrat Joe Biden 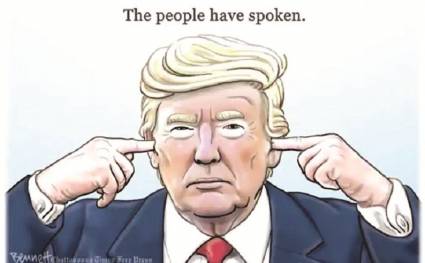 The height of irrationality among supporters of outgoing President Donald Trump: they are organizing a “second inauguration” for him, on January 20, at noon, at the same time that he will be sworn in and officially begin the term of 46th U.S. President, Democrat Joe Biden.

Trump’s inauguration will be online and can be considered a provocation and probably a violation of constitutional norms, but there they go proclaiming that it is their right “to freedom of expression.”

As social networks endure everything, more than 60,000 Facebook users are promoting the event they have called “Donald J. Trump’s second presidential inauguration ceremony,” and they claim in a “disclaimer” that they are a sum of 325,000 private individuals, not affiliated with any formal organization, who want to show their support for “President Donald Trump”.

In the face of such ignorance of the popular will expressed in the ballot box and the certification of the Electoral College, Facebook has simply issued another “disclaimer”: “Joe Biden is the president-elect. He will be inaugurated as the 46th president of the United States on January 20, 2021.”

As reported in The Hill, the event will be hosted by Ilir Chami and Evi Kokalari, who was allegedly part of Trump’s 2020 campaign and is featured in regular on right-wing news networks such as One American News Network.

In a recent post on the Facebook page, Kokalari re-posted Facebook’s disclaimer, writing: “Our voting rights are under attack! So is our freedom of speech! And FB’s disclaimer in this post proves it.”

One could not expect less from these fans when Trump has not recognized himself as a loser and continues to encourage such false news and disruptive actions.

Rumor has it that in his obsession with staying in the White House he seems to have in mind appointing attorney Sidney Powell as special counsel to investigate allegations of voting fraud.

For identification purposes, Powell was separated from the Trump campaign in November when he was mocked for claiming that there was a broad “national conspiracy” to deny the current president victory and an “immense influence of communist money from Venezuela, Cuba and probably China” that interfered with the elections, in addition to claiming that the voting machines used were “created in Venezuela by Hugo Chávez” to ensure that he would never lose an election.

At the time, Rudy Giuliani, Trump’s personal lawyer, had said in a statement: “Sidney Powell is practicing on her own. She is not a member of Trump’s legal team. Nor is she an attorney for the President in her personal capacity.”

Now, that statement comes crashing down. Desperate Trump put her in the ring and provided evidence that anywhere in the world psychiatry would have already rendered a verdict of committal or at least strong treatment of insanity.

1 year ago Juventud RebeldeTrump, US politics0
2020: Hollywood's worst yearArgentina in the year of the pandemic