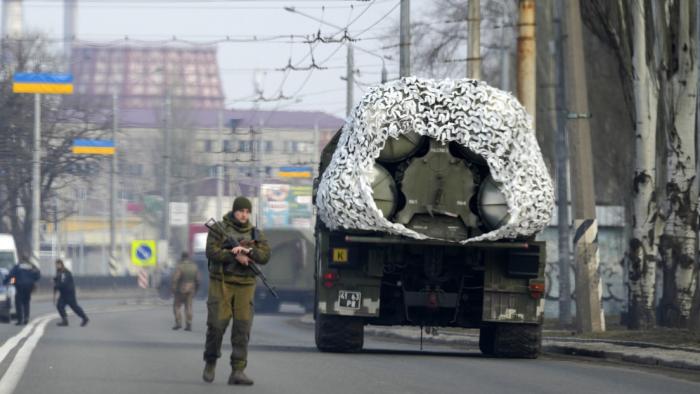 The territory of Ukraine is in an extremely dangerous situation, Kremlin spokesman Dmitry Peskov said, explaining that the army acts as terrorists because they install multiple rocket launchers in Kiev and Kharkov under the advice of foreign experts.

The territory of Ukraine is in an extremely dangerous situation, Kremlin spokesman Dmitry Peskov called it, explaining that the military acts as terrorists because they install multiple rocket launchers in Kyiv and Kharkiv under the advice of foreign experts.

At this juncture, Vladimir Putin urged the Ukrainian military: “Do not allow neo-Nazis and ultra-nationalists to use your children, wives and old people as human shields, to take power into their hands. It seems that it will be easier to come to an agreement with you than with this gang of drug addicts and neo-Nazis who lodged in Kyiv and took the entire Ukrainian people hostage,” Russia Today quoted him as saying.

The head of state noted that the main fighting of the Russian Army is conducted, “not against regular units of the Armed Forces of Ukraine, but against nationalist formations, which, as is known, bear direct responsibility for the genocide in Donbass and the blood of civilian citizens of the people’s republics.”

He highlighted information that neo-Nazis are deploying heavy weapons in central areas of large cities, including Kyiv and Kharkiv, to provoke return fire from the Russian military against residential neighborhoods. “They act in the same way as terrorists all over the world: they hide behind people in the hope of blaming Russia for casualties among the civilian population,” Putin said.

Pope Francis visited the Russian Embassy to the Vatican to meet with the head of the diplomatic mission, Alexander Avdeev, to discuss the situation in Ukraine. The pontiff assured them that he is closely observing the development of events in Ukraine and expressed his concern about the escalation after the start of the military operation ordered on Thursday by Russian President Vladimir Putin.

Likewise, the presidents of Russia and China, Vladimir Putin and Xi Jinping, held a telephone conversation to discuss the Ukrainian crisis in a constructive and friendly atmosphere.

Xi stressed that he respects Russia’s actions in the crisis in the neighboring country and showed the coincidence of the positions of the two countries on the main issues of the international agenda, the Kremlin says in its statements.

The Council of Europe suspends Russia’s membership amid its military operation in Ukraine, a measure proposed by Poland and Ukraine that won the consensus of 42 of the committee’s 47 members.

Leaders of European Union countries agreed at an emergency summit to impose new economic sanctions against Moscow following the start of the military operation launched by Russia to defend Donbas.

European Commission President Ursula von der Leyen said that this second package of sanctions by the bloc will affect 70% of the banking market and Russia’s major state-owned enterprises, including those in the defense sector.

RT also highlighted the words of UK Foreign Secretary Liz Truss, who warned that London will continue to take action until the Russian economy is impaired and the integrity of Ukrainian territory is restored. “We will not rest until the Russian economy has been degraded and Ukraine’s sovereignty and territorial integrity have been restored,” the head of British diplomacy said.

For his part, Russian Foreign Minister Sergei Lavrov accused NATO and the European Union of supporting Kiev in recent weeks, when it decided to seize by force the Donetsk People’s Republic and the Lugansk People’s Republic, in order to destroy the Minsk agreements. “The West fully supports the Kyiv regime in its efforts to sabotage and in the end destroy the Minsk Agreements,” Sputnik quoted Sputnik as saying.

However, no country in the transatlantic alliance wants to get involved in a war with Russia, according to statements by French Defense Minister Florence Parly and reminded that the Eurasian nation is a nuclear power.