At the International Poetry Festival of Havana, with the presence of this outstanding Russian poet, a reading of his work was made at the Casa del Alba Cultural de La Habana 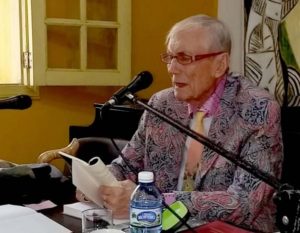 Yevgeny Yevtushenko read his poetry at the Casa del Alba Cultural.
Photo: by the author

Much and much deserved is his notoriety. Among the main epithets he was given was that of being, if not the most, at least one of the most famous poets in the world. For this reason, the International Poetry Festival of Havana (FIPH), which now extends its epilogue to the east of the country, reserved among its events a unique reading by Yevgeni Yevtushenko. It was an occasion when the Casa del Alba Cultural Center in the country’s capital city welcomed him with a new audience that –on more than one occasion– applauded him.

Nominated more than once for the Nobel Prize for Literature, the poet, born in Siberia, Russia, in 1933, is familiar with crowds that gather to listen to him. At the age of 22, his love poetry gave him a popularity that grew with his readings in public spaces. In two occasions 6500 people crowded the Kremlin theater to enjoy his poetry.

In the life of this singular being –unique for his authentic poetry and his peculiar way of dressing– reading has been a common exercise. This time it was one more of his typical expressions. Yevtushenko read his poems for more than 90 minutes and between them he gave his audience those sparks that he usually inserts to even more brighten up his astonishing poetry.

After reading excerpts from his book Dora Franco, written in 2011, “with the permission of its heroine, “the Colombian model who accompanied him during his tour of that country where he arrived in his youth as part of a Latin American poetry tour, Yevtushenko chose, among other poems “The Execution of Stenka Razin”; “In the Country Called More or Less”; and “The Key of the Comandante”, dedicated to Che Guevara.

The reading of The Execution … allowed the public to enjoy the 14 different rhythms he mentioned before starting. This is a song to freedom and the evocation of a just leader who defended the peasants. Claiming to have had the illusion of witnessing the facts described in the epic song, the poet read aloud the text in which he describes the public execution of the hero. With remarkable impetus he reached the concluding verses: On the Tsar’s head/chilled by those devilish eyes/the Cap of Monomakh began to tremble/ and, savagely/not hiding anything of his triumph/Stenka’s head burst out laughing at the Tsar!

The key … served to listen to this man, who claims to be a bearer of a poetry that is “a personal confession put into verses,” from his political stance, which allows him to write with exquisite beauty events such as the death of the Heroic Guerrilla and disapproval of converting his sacred image into merchandise. “We do not know, sir, we do not know …” / Where is the key to the future? / The fear of not finding it, panic grabs us. / But the key is in your hands, / I’m sure. / (…) To the left, / boys, / always to the left / but not to the left / of your heart.

In the Country … one can see the poet’s critical and foresightful gaze against evils that corrode the best political purposes, such as bureaucracy, corruption and opportunism, among other human vices that violate the integrity of character, all expressed with great irony. (I would like to stand in front of God, as I am, / not as someone more or less. / Not being more or less happy / in this more or less life … / In this more or less freedom.

But the poet of the great audiences –whose work has been translated into more than 70 languages– and who stirred so many hearts more than six decades ago with his intense love verses, now at 83 years of age, has still much to tell us about the most universal of feelings.

In the presence of his wife Masha, he read –once again for her– and for all: I Love You More than I Love Nature, a poem with which he begins his book Stolen Apples, recently published by the collection Sur of the FIPH (still available at bookstores).

I love you recklessly / as an abyss, not as a small ravine. / I love you more than all possible, / and also more than all the impossible. He read and everyone could see this other side of the poet: earthly and in love. He continued: I love you more than my homeland / because my Homeland is you. Masha is perhaps the inspiration; but the emotion was shared, because we knew we had witnessed poetry itself.