Workers must create their company’s plan

Cuban Minister of Economy:
Workers Must Create Their Company’s Plan for 2020

Alejandro Gil, Minister of Economy and Planning, at the eighth Congress of the National Association of Economists and Accountants of Cuba. Photo: Ariel Ley Royero/ ACN.

By Lissett Izquierdo, Cubadebate journalist. Graduated from the University of Havana (2014). She worked at the Cuban News Agency from 2011 until September 2018.
and Ferrer Ariel Ley Royero 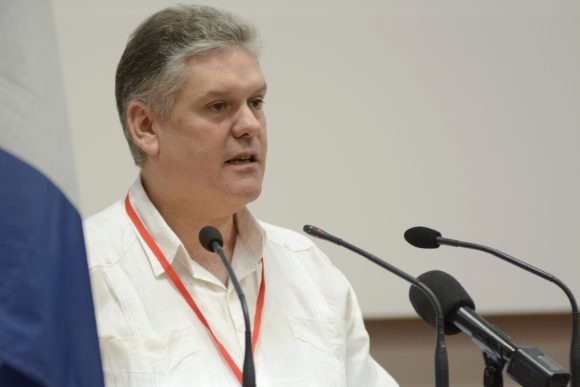 Alejandro Gil, Minister of Economy and Planning, at the eighth Congress of the National Association of Economists and Accountants of Cuba. Photo: Ariel Ley Royero/ ACN.

The Cuban economy plan for 2020 will have a new conception: it will be elaborated without specific directives or limits, since it will come out of the active participation of workers in each company, informed Alejandro Gil, Minister of Economy and Planning (MEP), this Wednesday.

Speaking at the inaugural session of the VIII Congress of the National Association of Economists and Accountants of Cuba (ANEC), at the Havana Convention Center, the Minister argued that planning will become a collective construction, in which the potentialities of the country’s entities are identified.

Gil reminded the delegates and guests that up to the moment a global model of the economy was made, from which the specific directives for sectors came out, that is to say, the requests for goods and services, as well as the pre-defined level of imports and exports that the economy would have.

According to Gil, now “there is no straitjacket,” but we will have to be objective, realistic and conscious. This new way, demanded for years by the workers, also requires a change of mentality, because “there will be those who are used to the numbers coming from above,” said the minister.

For this reason, he said, this process – which is currently taking place in the labor collectives – will require the support of ANEC and the Central de Trabajadores de Cuba (CTC). “The plan that is built has to be by nature more efficient than the one that came from the top down.

Gil ratified that for next year, in the midst of the restrictions that the country presents and the tightening of the blockade imposed by the United States, growth and development can be guaranteed due to the existence of human capital, a national industry with potentialities to be better exploited and a more diversified foreign trade.

Among the priorities, he mentioned activities related to food production, housing programs, transportation, computerization and medicines. The financing of national industry will also take precedence.

In the words of the head of the MEP, one of the problems that hinders the performance of the Cuban economy is the persistence of a mentality that is highly dependent on imports. In recent years there has been a trend towards increasing purchases abroad, which has an impact today, he argued.

He explained that goods are imported that with efforts can be produced within the country. For example, animal feed for pigs, because when there are failures in their purchase, the production and commercialization potholes appear, as happened in the last quarter of last year.

“The economy must prepare itself to gradually reduce these purchases, although it will not be resolved immediately,” he said.

In agreement with Gil, one of the ways to strengthen national industry is to promote productive chains, based on policies and financial incentives. It has also been conceived to strengthen local development projects, based on the use of the endogenous resources of the territories.

Another topic discussed by the Minister of Economy was that of investments. He commented that not infrequently there are differences between feasibility studies and yields. In these studies, scientific rigor must prevail, he said.

He added that the return on investment is little analyzed, when the most important thing is the examination of the expected result of the investment and how it impacted the economy.

Economists committed to the development of their country 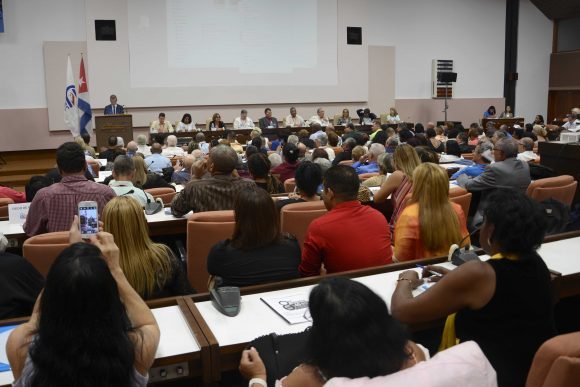 Eighth Congress of the National Association of Economists and Accountants of Cuba, at the Havana Convention Center. Photo: Ariel Ley Royero/ ACN.

In the opening remarks, Oscar Luis Hung Pentón, president of ANEC, reiterated the commitment of the more than 80,200 members of the organization to the process of updating the Cuban economic model.

In reviewing ANEC’s performance in recent years, Hung Pentón highlighted the activity of improvement, especially of officials and specialists in the state sector of the economy, as well as the development of science.

On the other hand, the working links between ANEC and the Permanent Commission for the Implementation and Development of the Guidelines constitute an expression of the close communication existing today between the governmental structures, directly involved in the transformations of the economy, and the prevailing Cuban economic thought in the civil society, said the expert.

The meeting was attended by Jorge Cuevas Ramos, member of the Secretariat of the Central Committee of the Party and Head of its Economic Department; Meisi Bolaños, head of Finance and Prices; and Abel Prieto, director of the Martiano Program Office and president of the José Martí Cultural Society.

3 years ago CubaDebate, TranslationsCuban economy0
Epistolary of a TimeWorld Day Against Elder Abuse