Home Women in the Ring

Women in the Ring

Boxing: Women in the Ring

Although boxing is inherent to our sporting tradition, several voices linked to Cuban pugilism advocate the inclusion of our women in this sport, a decision that falls to the authorities of this discipline on the island. 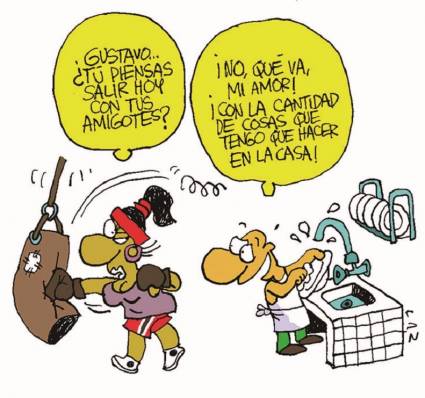 SHE: Gustavo… You’re thinking of going out today with your cronies? HE: I can’t go, my love, with all the things I’ve go to do at home!

Cuba is lagging behind. And no, I’m not talking about transportation or technology. I’m talking about boxing. Our men’s squad are championss because of their respect for each other. To name the four letters in a pugilistic event is to sow, among rivals, fear of the coming storm. It is to know that they will have to die on the canvas to defeat ours. We’ve earned that right over the years. But, I insist, we are lagging behind. When the next edition of the World Series begins, if it sees the light after the corruption scandals at the highest levels of the International Amateur Boxing Association (AIBA), it will be competing in eight male divisions and, listen well, in four female divisions. While this is not yet confirmed, when the river sounds…

And our female boxing, dear reader, doesn’t even bring stones.

Nelsy Torres is 21 years old and gets up early every day to train. Her greatest aspiration is to be able to compete officially.

“As a boxer, I need boxing to be legalized because I want to fulfill a dream. If they don’t give me the opportunity, they are slowing down women’s rights. While other countries advance with results, Cuba is lagging behind. I’m sure we can have the same results as men. Even better. We can’t wait for generations of boxers to go by, and we can’t get anywhere,” she says impotently.

Rolando Acebal, helmsman of our main boxing squad, confesses that he has not seen any girl fight here in Cuba, but he does not hide his opinion that we could have good exponents in the future. “Currently, in the world, the countries that practice male boxing also practice female boxing, and no harm has been seen to the health of the athletes. If it had been any other way, it would have been detected and it would all be over.

“There are Cuban coaches abroad who work with women’s boxing. I think we should not deny that right to women who have the desire and have requested the opportunity to train and compete. There are even mothers advocating for their daughters’ opportunity. We’ve been told that they’re analyzing, doing medical studies, but we’ve been doing it for a few years now and we’re lagging behind in that sense.

The Story: A Ring on the Stand

The girls with their jabs, their uppercuts and their hooks are not rain that just fell. Since the 18th century, there have been sports fights between women in this discipline. The Londoner Elizabeth Wilkinson, in 1722, is the oldest known champion. A little more than a century later, it was fought for the first time on this side of the Atlantic, when the bell rang for the North Americans Nell Saunders and Rose Harland to face each other, ring by ring, in 1876, on American soil.

In 1954, almost 80 years later, a women’s poster could be seen on television. One of the fighters who appeared in the “magic box” was Barbara Buttrick, one of the most famous boxers of all time.

The United States was the country where women’s boxing developed the most, following that fight of the nineteenth century. Between 1975 and 1978 some women applied for boxing licenses. Particularly important was the successful trial that the boxers Cathy “Cat” Davis, Jackie Tonawanda and Marian “Lady Tyger” Trimiar carried out against the state of New York, due to the rejection of their requests for licenses. The wide media coverage of these events directed public attention to this discipline.

However, the persistence of restrictions and prejudices led Lady Tyger to go on a one-month hunger strike for women’s rights in boxing in 1987.

As can be seen, some of the most important fights in the history of women’s pugilism have not been fought on canvas, but in the courts. Five years after that hunger strike, in 1992, Massachusetts boxer Gail Grandchamp knocked the system out by getting the state Supreme Court to recognize her right to box after eight years of trial. At the time, the Court held that it was illegal for an official to deny a license to box on the sole ground of the applicant’s sex. However, Grandchamp was unable to practice boxing because he had already exceeded the maximum age of 36 for amateur boxers.

In 1993, the USA Boxing Association, which is responsible for amateur boxing in the United States, agreed to regulate women’s boxing throughout the country after 16-year-old Dallas Malloy won a federal discrimination lawsuit in court.

Despite all the official and unofficial history, of all that baggage that goes back to the eighteenth century, it was not until March 15, 1996, that occurs the fact that is considered by many as the birth of modern female professional boxing. We refer, in this case, to the fight between Christy Martin and Deirdre Gogarty. That same year, the UK Amateur Boxing Association repealed the 1880 ban on boxing for women, and a year later, in July 1997, the first U.S. women’s boxing championship was held. In the following years, other countries were authorizing and organizing this discipline, in the women’s section, and were consecrated world champions in all categories. That is why it is difficult to understand that, in a country like ours, where neither race nor gender distinctions are established, we still do not have the legal or institutional instruments that allow our girls to get into a ring and defend the four-letter t-shirt with their gloves.

Boxing was first included in the modern Olympic program in 1904 in St. Louis, but it wasn’t until London 2012 that women were able to fight under the five hoops.

At the British event, women competed in three weight categories and a total of 36 boxers took part. The Executive Committee of the International Olympic Committee (IOC) still refused to include women’s pugilism as a demonstration sport in the program of the Games four years earlier in Beijing.

The time for women’s boxing matches in summer events is four rounds, two minutes each, unlike men, who fight in three three-minute moments.

If we consider our route, in which boxing has undoubtedly been the sport with the most Olympic and world titles in our history, nothing takes away the right to think that we could, with a little time, become a power of female pugilism. I sign it, and I stamp it.

Perhaps one of the aspects that most restrains the Cuban Boxing Federation is the issue of the safety of girls in the ring. In this regard, Rafael Lerena Naples, head of the medical corps of the national team of this sport, believes that there is nothing to worry about in this particular case.

“Unfortunately, we don’t have an athlete in the squad at the moment. The problem is that the competent authorities have not yet authorized Cuban women’s boxing to begin. We are waiting for that”.

The doctor says that “there has never been any damage to the health of these girls”. In this regard, he explains that “the risk in sport is in all specialties. People are at risk of being injured, even walking down the street. However, the risks in high performance are always minimized. The Cuban athlete has entered satisfactorily in all the sports disciplines and for having, especially in the specialties of combat. So why not in boxing? Cuba has demonstrated, with results, quality in boxing since the triumph of the Revolution, and has made it clear that we are a source, a quarry, of good boxers. Why not have boxers”?

“Bebo” Alcántara, 76 years old, ex-bodeguero and boxing fan since childhood, does not understand why women should fight in a ring. “Boxing is a gentleman’s sport. My father always told me this when my mother protested against the violence of the fights. Now, I love boxing, but I don’t see any attraction in seeing two women “punching each other”. Women are more delicate. I think they would lose even femininity.

On the other hand, the soul of the ring, the protagonists, who live daily the intrigulis of this sport, have favorable opinions on the development of them in the pugilism. The light welter Andy Cruz, considered the most complete boxer in Cuba at the moment, expressed his support: “I like very much that they also take into account female boxing. I have seen Cuban women fight, many have come from other sports. I have liked them, I have seen that they have quality and I know that in the future they can achieve great things. I am sure that in a short time they will reach the same height that male boxing has achieved.

Rolando Acebal explains that in Cuba women have had results in sports such as judo, weights or wrestling. “Traditionally, the Cuban woman is brave, a fighter, sacrificed. They are the example of Mariana Grajales, and have demonstrated over the years that they are capable of performing any task.

Hopefully, these voices will serve as a straight line to the chin to change mentalities. Hopefully, the brake and the lack of decision will not recover to the protection count of logic. We want to hear our National Anthem while, on a ring, the referee raises his arm to a Cuban girl.

I am a passionate lover of boxing, in all its dimensions. I do not think it is right to truncate the wishes of any woman, who voluntarily loves this sport and wants to practice it. They want to see history more beautiful than Mary Kom’s. For me the best boxer of all time, within the amateur world. The one that fought against all adversity and prejudices and became multiple Olympic champion. Cuba is left behind, many times for banal justifications. the personal decision of the individuals to respect themselves, as long as it does not affect the general society. And approving female boxing, does not affect anyone. Let’s step forward and in a few years we will have our champions, I’m sure of that. The potential is.

Yesterday I saw a photo on Facebook where in the foreground you can see a woman with a machine gun and in the background a man with an apron in front of the sink and a text almost the same as the caricature .. What a strange coincidence.

No to Boxing for women ??? And when they have taken the rifle? If we are going to talk about danger.

Not allowing female boxing is simply discrimination against women. Only they must decide if they are boxers or not. Why do some people believe they have the right to decide what only they should do? For a long time the female weightlifting was stopped.

That other countries do something is not an argument for us to imitate them. But undoubtedly women have the right to practice any sport according to their physical characteristics. I personally do not like boxing and least of all feminine.

Well if they want to promote women’s boxing or drawing serves, very badly, each person independent of gender has the same rights, at least is what they enact.

If it is found that there is no risk for women, that is, that does not cause any disorder to women because of the blows they may receive in the breasts, etc., I agree that it should be practiced; That the FMC of his opinion on the matter, because I am convinced that they will investigate before giving an opinion.