Home What are you faithful to?

The mysterious and not-so-mysterious motivations behind infidelities are revealed by psychologist Esther Perel, after years of studying intimacy among couples. 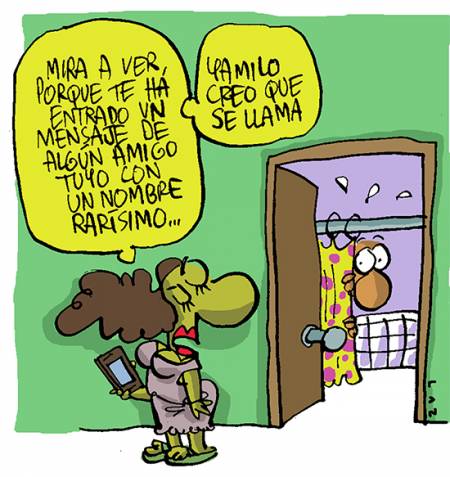 [CARTOON:She: Come take a look, you got a message from some friend of yours with an unusual name: Yamilo, I think she’s called, while he cowers in the bedroom…]

The bonds of wedlock are so heavy that it takes two to carry them, sometimes three.
—Alexandre Dumas, père

Being unfaithful has a tenacity that every marriage would envy. Its charm lies in the forbidden, but also in the intoxication of capturing a new passion, just as when the betrayed relationship began.

This is revealed by Esther Perel, a Belgian psychologist specializing in couples’ intimacy, who is visiting Cuba these days and agreed to give a series of talks on the future of femininity, an initiative of the Abanico project and its producer, Rafael Lavín.

Monogamy is concretized on a daily basis, but reality is a small portion of the human mind, where fantasy has much more space. That is why those who cheat almost never have the intention of hurting, says the expert.

More than distancing oneself from one’s partner or seeking pleasure from others, what is longed for is one’s own essence, what was left behind when assuming an exclusivity based on love, although desire is what drives these types of choices.

When it comes to light, what hurts most is not the contact with other bodies, the time or the resources “diverted” from the common desire, but the betrayal of that idealized mission to build the unique, indispensable and irreplaceable love that led them to unite in the first place.

In this digital era, it is easier and at the same time more difficult to hide infidelities. On social networks, you can meet many people, but there is also more risk of being caught in the crossfire.

Today a woman who decides to forgive is not looked at with the same condescension because there are more facilities to not depend economically on anyone and she can have all the sex she wants, says the expert. If it were not for this social pressure (always exerted on men), many people would recognize that their love is even stronger than disenchantment and would give their story another chance.

Esther is neither for nor against infidelity. Each case is a lesson and it takes courage both to break up and to rewrite the plot.

She shares two keys to achieve this: the first is that the unfaithful partner sincerely regrets the damage done to his or her partner, even if he or she does not feel remorse for the experience, and the second is to approach the conciliatory dialogue not from the sordid details (who, where, how), but from what they have learned about their own bond: Why you? Why us? What did you feel when you saw me every day? What did you discover about yourself? How do we get out of this together?

Marriage has been, and still is in some ways, an estate agreement: which family to nurture and who gets the assets in the event of death or breakup. That is why the magnitude of the deception depends both on what is done and how it is received by the other party.

If infidelity were generated because something is missing within a relationship, all marriages would be condemned to suffer it, because no one always has everything for the other: the couple is built between two imperfect beings who dream of something dialectically superior and live in permanent challenge, negotiating power and seduction inward and outward.

The unfaithful person violates the collective faith in a romantic model that we still defend, and that violation does not begin when he gets into another bed but before, from the chatting, the compliment in the street, the gesture of attention towards other people….

It is said that men are unfaithful for fear of commitment and women for hunger of intimacy, but life is a more complex equation, especially now, that we do not marry to have sex with someone, but to stop having sex with other people, Esther points out.

Even in open couples there are clear rules about when, where or with whom you can’t experiment, but going beyond the contract is exciting: transgressing the limits gives a sense of autonomy and can become addictive, no matter how traditional or modern the couple is.

Sexual alchemy is important in this experience. After a certain time, a few minutes of fantasy sex generates more endorphins than the daily exchange with your partner. In surveys carried out in different countries, the

12 days ago Juventud RebeldeEsther Perel, relationships, sexuality0
Esther Perel: Happiness is in the balanceA weekend amid shootings and price hikes