NRA Responds to U. S. Protests

NRA Responds to U. S. Protests with AR-15 Rifle Picture 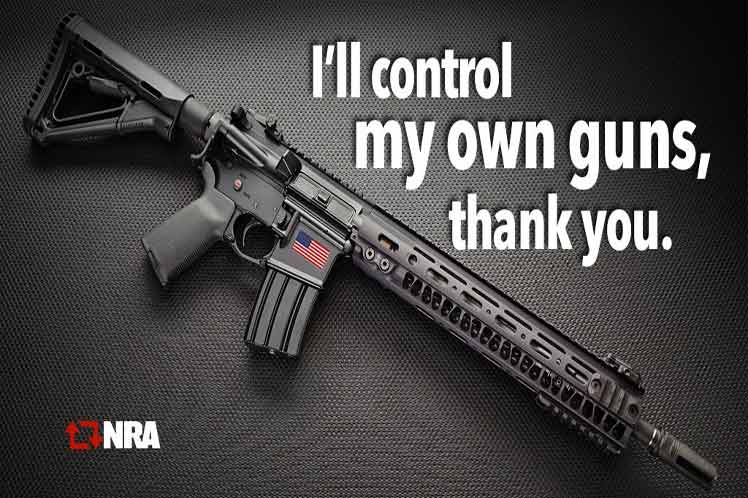 Washington, 14 Mar (PL) As thousands of students in the United States today demand concrete action against gun violence, the powerful and controversial National Rifle Association (NRA) published an image of the type of weapon used in a recent massive shooting.

“I’ll control my own weapons, thank you,” reads a Twitter publication of the main lobby in favor of these artifacts in the country.

That message is written on a picture of an AR-15 rifle, similar to the one used a month ago by the murderer who left 17 dead and as many injured in a secondary school in the city of Parkland, Florida.

Next to the image is added the label #2A, referring to the Second Constitutional Amendment of the United States, which establishes the right of citizens of this country to bear arms.

The tweet generated numerous reactions, including from supporters of the NRA’s viewpoint, who argue that advocating for greater arms control is tantamount to violating the amendment, or that mental illness is the cause of mass shootings.

But many Internet users criticized the organization for its rejection of any regulation that would make access to these devices more stringent.

“It is completely possible to have control of weapons and possess them at the same time. That’s common sense,” wrote one Twitter user, while another said the NRA is no longer a security group for hunting and weapons possession, but “a cowardly shriek for gun and ammunition manufacturers”.

Another of the responses to the lobby’s tweeting image pointed out that it always leaves out the most significant part of the second amendment, which speaks of the need for “a well-regulated militia”.

The same Internet user called for a ban on assault weapons and high-capacity loaders, universal background checks and raising the legal minimum age for acquiring a firearm.

Measures like these are being demanded by survivors of the February 14 shooting and by students who left their classrooms today for a 17-minute strike and other actions in honor of the victims of the massacre.

The NRA has reiterated its opposition to such proposals and has been the target of frequent criticism for that position and for its influence on the country’s politicians, especially Republicans, such as President Donald Trump, in whose campaign the organization invested millions of dollars.

“Hey, hey, NRA, how many kids did you kill today?” (NRA, how many children you killed today) screamed students who rallied this Wednesday in front of the Trump International Hotel in Manhattan, New York.