Unfortunately, while some seek any remedy to survive the setbacks in the midst of a health crisis, there are those who take advantage of this misfortune to enrich themselves. 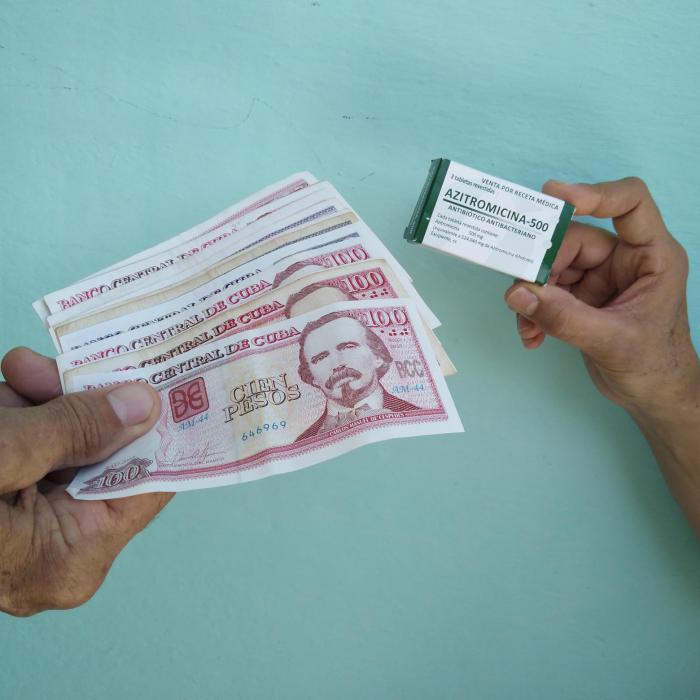 Photo: Freddy Pérez Cabrera
One listens impassively, as if deaf, when someone mentions that a certain medicine, such as a Rocephin vial or an Azithromycin tablet, is quoted in the informal market at prices exceeding one thousand pesos.

This is a simple reaction, because this type of information is not always completely real. However, we are facing a sad truth.

According to the listings on digital platforms, there are other drugs that exceed 500 pesos, such as Cephalexin, Duralgina, Vitamin C, Ibuprofen, Amoxicillin, Paracetamol, Metronidazole, Tetracycline, Clotrimazole in ovule and Nasalferon, just to mention a few.

One knows that the real basis is the shortage caused by the obstinate economic blockade of a government that cannot stand us as a sovereign country, and hunts us down in order to hinder any attempt to buy medicines and the supplies [needed] to manufacture them -and then they say that it is not to death, that the war they are waging against us is not against the people-. This, together with the world crisis that has unleashed this pandemic.

However, no one can deny that, behind closed doors, the shortage situation is aggravated by the lack of administrative control over the flow of drugs, and by carelessness, irresponsibility and indolence.

In any case, it takes a hard face, and a human face like a rock, to approach a family that is fighting tooth and nail for the life of a loved one, and make the unseemly proposal of selling salvation at a sky-high price.

It happens that, overwhelmed by the illness of the family member, shaken by the desperation caused by the real risk of death, many people get away from what is decent and unceremoniously pay the shameless opportunists for the smuggled medicine or the one brought in duty-free from abroad and which was not authorized for legal sale. On the other hand, necessity means that no one takes the trouble to speculate on the origin of the drug, nor does anyone notice the clear malice of the gesture. It is like a reciprocal effect, the shameless one takes advantage and the needy one solves part of his problem.

On the subject, in recent days it became known that a woman from Matanzas is serving a six-year prison sentence for illicit drug trafficking, an unscrupulous practice which, we insist, has been accentuated in times of pandemic.

The aforementioned author of the crime managed to acquire in several units of the province the analgesic known as Tramadol, for its subsequent sale at an overprice, using the informal market in Havana.

The severity of the sentence also has to do with the fact that the said drug is among those that produce effects similar to drugs, narcotic and psychotropic substances.

After the investigation and the exhaustive review of the facts, the First Chamber of the People’s Provincial Court of Matanzas issued the sentence, which also included sanctions for other persons involved.

This issue, and its different aspects, has been addressed without failing to point out the undeniable link of this practice with the lack of control and supervision, especially within the pharmacies and the whole network of entities involved, in one way or another, with the distribution and sale of medicines.

Successive evaluations of the pharmacy system in Matanzas in less than a year have brought to light the disorder in those establishments, according to the local newspaper Girón. On the other hand, in only two units economic damages for a value of more than 107,000 pesos were detected, a sign of fissures in the organization of the processes.

Even so, no explanation can justify the transfer of high-demand medicines which, as it is known, are not enough to satisfy the demand of the population.

Unfortunately, while some seek any remedy in order to survive the setbacks in the midst of a health crisis, there are those who take advantage of this misfortune to get rich.

There must be an end to contemplation with them, commented in recent days the First Secretary of the Central Committee of the Party and President of the Republic, Miguel Díaz-Canel Bermúdez, referring to this unacceptable procedure at the expense of human health.