Two Countries Competing in the USA

In the United States, two countries are competing 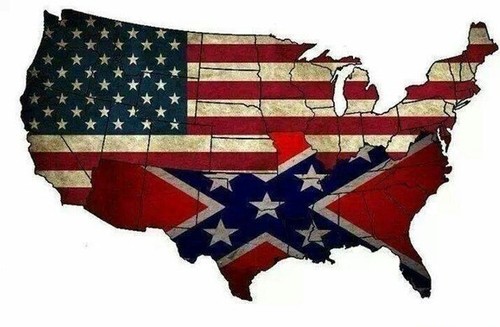 Southern map of the Confederate states.

In the middle of the 19th century, the Republican Party, representing the interests of the nascent U.S. industrial capital, won the military battle against the Southern Democratic Party, which represented and defended the slave plantation and slavery itself.

However, the southern institutions-including its religious system that justified slavery and defined whites as superior social beings-did not disappear. The defeat suffered by the South permeated southern society, which since then has seen the North as foreignizing, secularizing, and foreign: an enemy to be fought. The civil war, which for the North ended in 1865, had just begun for the South.

The assassination of Abraham Lincoln by a Southerner in that year meant the first questioning of the power of the North. This situation has continued until today.

The South, since then, has been discriminated against by the power of the North. As the family farm became extinct, replaced by agribusiness, those displaced farmers who opposed the new capitalism – which, by paying low wages to Mexicans, made it impossible for the farmers to prosper – became allies of the South.

A southern nationalism opposed to the north developed in the south. If one thinks of the United States as a single nation, this phenomenon may go unnoticed. But, in reality, they are two nations with different dynamics.

The southerners were free traders because the plantations in the south depended on cotton exports to Europe. Those in the north who industrialized were protectionists, influenced by an ideology of self-employment oriented to depending on the work of farmers in the field, with or without slaves. In the south, which extended along the east coast to Virginia and reached the gates of Washington, it dominated the plantation.

The South’s military defeat in the Civil War did not mean the defeat of the South’s institutions, nor its ideology. The North became industrialized and today depends on finance, banks and mortgages since the industries disappeared when they were sold to the Third World. The South, on the other hand, continued to be agricultural until the 1920s when large-scale oil extraction began in Texas, Louisiana and Alabama. Therefore, it was in the South where, little by little, the powerful oil power group developed.

In the south, whites were mostly poor but considered superior to slaves. There the Ku Klux Klan emerged in 1866, which soon became the terrorist organization that channeled white supremacist hate in the United States and whose function was to keep alive those practices that the new anti-slavery laws prohibited. The ban on voting for Blacks was maintained and only after a new intervention by the North with federal troops a century later were the civil rights of Blacks legally recognized.

Nationalist and conservative ideology spread in the South as part of the tradition of identifying with the past. The “founding fathers” recognized slavery and did not question it. Even the text of the Constitution, in its original version, allowed slavery.

One element that cannot be ignored is the religious aspect. The ideology of revanchism is based on the religion of Southern Baptists, for whom the South had been God’s chosen people in their struggle against the North. For them, they lost the civil war because God was testing them. The expansion of the country before and after the civil war was led by Southerners. And the same thing happened in the states bordering Canada, where a northern European Lutheran tradition joined with local racist attitudes. Many Southerners left for Alaska. The state of Utah is populated by Mormons, a racist theology with southern bases from that right-wing Arizona tradition.

Blacks and ethnic groups have been influenced by this ideology through the “prosperity gospel” that this movement has emphasized since the 19th century.

When people in North America talk, especially during election periods, about blue states and red states they are referring to two nations.

That’s why it was said that, according to the Southern view, Barack Obama embodied the interests of the North as a northerner (from Chicago), Black, and an ally of the world of finance – the three elements that the Southern right identified in the struggle against the North. On the other hand, to Donald Trump, who was defeated in 2020, was attributed the status of defender of the interests of the red states, because he had assured majority electoral support in the most industrialized states.