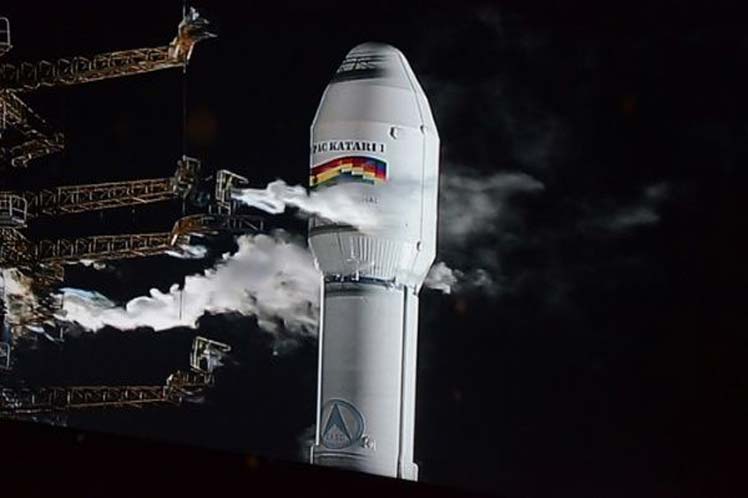 La Paz (PL) – When Evo Morales spoke of the possibility of Bolivia having its own space satellite, some thought he was joking.

Five years later, however, the first Bolivian satellite, Túpac Katari (TKSAT-1), is a reality and has enabled the South American country to enjoy true sovereignty over telecommunications.

Until then, Bolivia had been contracting foreign satellites for 35 years to use these facilities, with the consequent disbursement in dollars and the effect on the national economy.

Today, in addition to that function, TKSAT-1 has generated revenues of $102.2 million in its five years of operations, according to Iván Zambrana, manager of the Bolivian Space Agency (ABE).

If we didn’t have a satellite of our own, that money would have gone outside,” said the director.

In addition, Zambrana recalled that the device managed to reverse the situation of ‘exclusion and inequality’ in access to telecommunications in the country, especially in rural areas, where more than three million Bolivians live.

This does not mean that we have now solved all the problems, but we have made significant progress in erasing this inequality that existed in the Bolivian population, he said.

According to the manager, there are only 50 countries in the world that operate telecommunications satellites, and four are Latin American: Argentina, Bolivia, Brazil and Venezuela.

Zambrana explained that in the first quarter of next year Bolivia will launch the service ‘Banda Ancha en tu Casa’ [Broadband in Your Home], which will offer internet service at low cost, with 30 percent of free space that still has the satellite Túpac Katari.

He also added that a service will be enabled that will allow people to visit the Amachuma earth station free of charge on the first Friday of each month.

The device, owned by the Plurinational State, was placed in orbit on December 20, 2013, from the Xichang Satellite Launch Center in China.

The vice-minister of telecommunications, Gustavo Pozo, recalled that when Evo had this idea he encountered much resistance, especially because of the high cost of the device, but the president was always clear that the benefits were much greater than the costs.

Currently, TKSAT-1 guarantees all Bolivians 30 television channels, six of them in high definition, and 26 radio stations totally free anywhere in the country.

In addition to its basic services, Túpac Katari has made it possible to transmit information via satellite to all corners of the Bolivian population, the reduction of the tariffs of the communications company Entel in calls, and that state satellite television has a price 80 percent cheaper than the others.

Among its fundamental benefits was the coverage of the Odesur Sports Games, which took place this year in Cochabamba (center), and were broadcast live and in high definition to the 14 participating countries.

It is located in a geostationary orbit, on the plane of the Earth’s Equator, 87.2 degrees west longitude and 36 thousand kilometers above the Earth’s surface, approximately on the Galapagos Islands, in the Pacific Ocean.

In total, the Agency has 65 workers, all Bolivians, and is in charge of more than 2,500 telecenters, more than 600 new radio bases, an implemented telehealth network and an educational television, all thanks to the implementation of TKSAT-1.

ABE’s main clients are the state-owned Empresa Nacional de Telecomunicaciones (Entel) and the private telephone companies Viva and Tigo, as well as other institutions such as Customs and the General Personal Identification Service of Bolivia.

Initially, ABE planned to work on another project for a second satellite, Bartolina Sisa, to support prospecting and natural resource management tasks, monitor agricultural projects and strengthen the search for water resources, but it has been deferred by a budget issue.

Túpac Katari and his wife Bartolina Sisa were indigenous leaders who were dismembered in retaliation for their uprisings against the Spanish colony in the 18th century.

Impossible for his executioners to imagine that three centuries later, the Aymara warlord would travel in the form of a satellite to give his compatriots sovereignty over telecommunications.