The protest was seconded by thousands of Palestinian prisoners in various detention centres inside and outside the occupied territories. 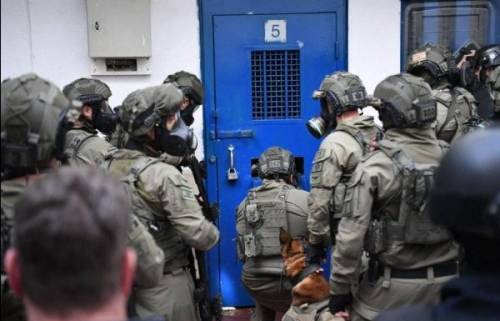 Israeli military policemen violently burst into the cells and even used the dogs of prey against the defenceless prisoners. Author: Free Palestine Published: 23/01/2019 | 09:02 pm

Ramallah, January 23.- More than 1,200 Palestinian prisoners held in the Israeli high security prison of Ofer went on an indefinite hunger strike in protest against the aggressions and mistreatment of military police, aided by dogs of prey, during violent searches carried out in their cells.

The protest was seconded by thousands of other Palestinian prisoners in various detention centers inside and outside the occupied territories, Middle East Monitor reported.

Ofer prison is the only Israeli prison built in Palestinian territory, located near the town of Beitunia, from which it is separated by an imposing concrete wall, and only three kilometers from Ramallah, in the West Bank.

The prison is governed by its own law and the hunger strike is considered a transgression of the rules, which carries severe punishments, sources of the Resistance recalled.

Ofer prison houses about 1,200 Palestinian prisoners, including a large number of young people and minors.

According to the Palestinian prisoners’ rights group Addameer, there are about 5,500 Palestinian prisoners in Israeli prisons, including 230 children and 54 women. Of that number, 481 were held without trial under the pretext of an illegal practice known as “administrative detention”.

In all Israeli prisons tensions increased, as the prisoners solidarized with Ofer, and suspended their daily activities, even refusing to eat.

According to the Palestinian Prisoners Association, some 150 prisoners were injured when special forces of the Israeli military police stormed Ofer prison on Monday morning.

According to this organization, six prisoners suffered bone fractures, 40 were injured in the head and had to receive stitches, and several were injured as a result of the use of rubber projectiles and tear gas.

Meanwhile, at the United Nations, during the Security Council’s quarterly open debate, the Cuban representative, Ambassador Anayansi Rodríguez Camejo, reiterated her strong rejection of Israel’s use of disproportionate and indiscriminate force against Palestinian civilians in the occupied territories.

It also condemned the unilateral actions of the United States, such as the withdrawal of financial support for the United Nations Relief and Works Agency for Palestine Refugees in the Middle East, the repeated obstruction of that country so that the Security Council does not condemn the escalation of violence, the tragic events that have occurred in the Gaza Strip since 30 March 2018, and the establishment of its diplomatic representation in the city of Jerusalem, which only contribute to the worsening of the situation.