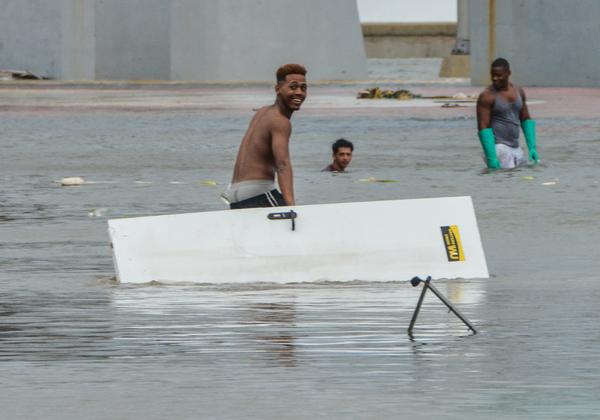 Floods near the N and 15, caused by the penetration of the sea, after the scourge of Hurricane Irma, in the municipality Plaza de la Revolución, in Havana, on September 10, 2017. ACN FOTO / Marcelino VAZQUEZ HERNANDEZ./oca

Havana, Sep 15 (ACN) Criminal conduct perpetrated during the passage of Hurricane Irma through Cuba, as well as those that violate the normal recovery process, will be punished with all the rigor of the law, said Yamila Peña, deputy prosecutor chief of the Attorney General of the Republic.

During a meeting with the press, the deputy prosecutor said that the investigation process continues against a group of citizens, many of them with a provisional custody order, for crimes of disobedience, attacks on and alteration of public order, among others, whose results will be subsequently reported.

From what has been confirmed in the Criminal Code and the Criminal Procedure Law of Cuba, and without violating any Due Process guarantees, the accused, faced with severe penalties, will be liable for their actions before the People’s Provincial Court, Peña explained.

According to Peña, during Irma’s passage through Cuban territory, the Attorney General, in fulfillment of its functions as guarantor of Socialist Legality, maintained, from the first moment, the vitality of its services, even in the most intricate places and even under adverse conditions.

This, he said, aims to ensure consumer protection and the proper use of resources destined for recovery.

It is not a question, he argued, of supplanting the functions of management cadres and administrative officials, but of being present to control this recovery process, to face and to anticipate, as far as possible, criminal behavior that is exacerbated under complex situations such as this.

Among the crimes are price alteration, speculation, consumer deception, which must be denounced by the population both in the units of the National Revolutionary Police and by the Single Line of the Public Prosecutor’s Office, the mailboxes located in each of their installations in the different instances and by the telephones 080212345, 7 2069073, 7 2069077 and 7 206 9088, indicated.

Peña insisted that what is important now is to reinforce prevention, to explain to the population how much is being done in favor of recovery, and to maintain the principle of zero impunity in the face of violations of the provisions.