Home The Kiss of Life

The Kiss of Life

The Kiss of Life 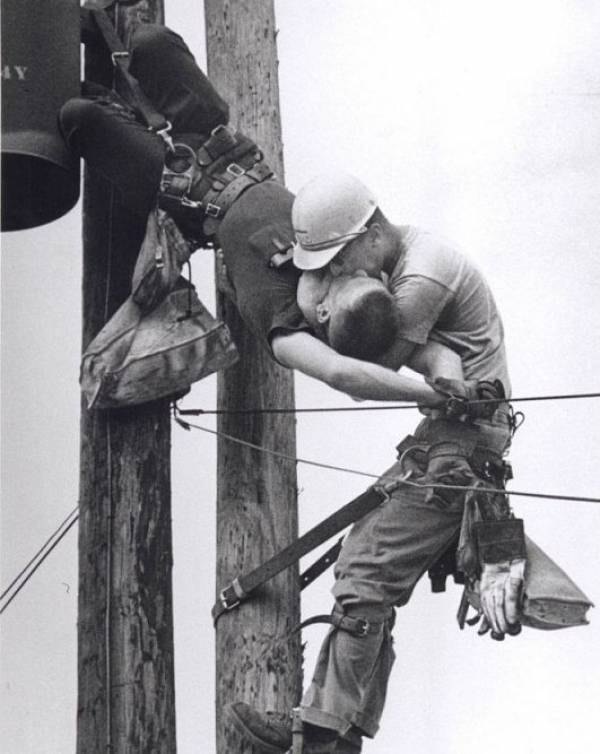 A young operator on U.S. national power lines brings his unconscious partner back to life with mouth-to-mouth resuscitation. Author: Taken from the Internet Published: 15/08/2018 | 10:10 am

On July 17, 1967, the American photographer Rocco Morabito (1920- 2009) was hunting images for the Jacksonville Journal, in the state of Florida, of which he was staff. After several hours without his lens catching anything important, he decided to return home. He was about to open the door of his car when a loud noise shook him.

He looked in the direction of the explosion and could not suppress a gesture of stupor. In fact, at the top of a pole, almost 15 meters from the ground, a young operator of the national electricity lines who was carrying out maintenance work was lying unconscious and hanging from his safety harness, after receiving in his body the colossal discharge of 4 000 volts.

Next to the victim, one of his companions was trying to revive him with mouth-to-mouth resuscitation. Rocco wasted no time, and after using his car radio to warn emergency services urgently, he photographed the unique rescue. The image is known worldwide as “The Kiss of Life”.

In 1968, this photograph was awarded the important Pulitzer Prize and was the recognition of a photographer who dedicated his career to street journalism. For years, the image served as an example in the training courses of electric companies, and even of the Red Cross. For Rocco Morabito, the only important thing was what he himself conveyed: “Someone helping someone”.