Home The CIA and the George Orwell Paradox

The CIA and the George Orwell Paradox

The CIA and the Paradox of George Orwell 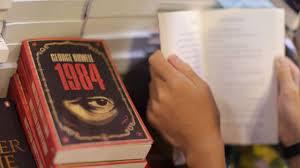 English writer Eric Arthur Blair, known worldwide by the literary pseudonym  George Orwell, was a combatant during the Spanish Civil War, which he said he joined “to kill fascists, because someone had to do it.”

His novel 1984 was an indictment of totalitarian regimes and became the CIA’s greatest success in its most widespread propaganda operation against the Soviet Union in the 1950s.

Orwell was born June 25, 1903 in India, where his father worked as a low-level colonial government official at the age of two, he moved with his mother and sister to England.

His literary career was based on those early experiences. He wrote the novel Burmese Days and essays such as A Hanging (1931) and Shooting an Elephant (1936) in opposition to the colonial system, in addition to writing stories about workers’ conditions.

These first texts place him in the liberal tradition of the generation of European writers born at the beginning of the 20th century, defrauded by the crisis of bourgeois society. In the face of the new conflict that German fascism would provoke, many of them took positions sympathetic with socialist ideas and the USSR in opposition to Nazi barbarism.

Another stage in his formation began in the Spanish Civil War, in which he was wounded and knew first hand the internal divisions of the anti-fascist front, among Trotskyists, with whom he sympathized, communists, anarchists and other tendencies. Meanwhile, from the USSR, came news about Stalin’s purges that shook his ideas favorable to socialism in that nation.

He wrote: “The Spanish war and other events in 1936-1937 changed things, and since then, I knew where I was. Every serious line I have written since 1936 has been written, directly or indirectly, against totalitarianism and in favor of democratic socialism as I understand it.”

Under these premises he presented in 1945 the novel Animal Farm, a parody of a totalitarian society in which the local animals carry out an insurrection against the humans, a plot which expresses open criticism of the Soviet system and of English society of the time.

Later, in 1948, he finished his novel 1984, in which he presented a world ruled by great dictatorial powers and describes a totalitarian empire directed by  “Big Brother”, or the maximum leader. He bases his power on instruments of domination of the whole life of his subjects, whose civil rights are violated and even their love life is regulated.

He spent his last energies in the writing of that narrative, affected by the tuberculosis that would take him to his grave in 1950. [Meanwhile], on the other side of the Atlantic, in the United States, the recently-founded Central Intelligence Agency (CIA) fine-tuned a subversive campaign aimed at “conquering the hearts and minds”, mainly of the European intelligentsia.

One of the propagandistic themes of that battle was the promise that, after the defeat of “Asian barbarism”, identified with the USSR, the Western camp led by the United States would build a better world, based on democracy, human rights and freedom. [This was] a fable in which not a few intellectuals of the time believed.

To achieve that goal, the CIA organized the Congress for Cultural Freedom in the early 1950s. It was supported by a vast global network of allied governments and special services, cultural institutions, think tanks, press organs, publishing houses, foundations, and all kinds of institutions related to the sphere of culture, in a mega operation that extended into the 1960s.

As never before, incalculable efforts, resources and police methods of recruitment, blackmail, propaganda and psychological influence were directed at a sector of the intelligentsia. [They had been] pigeon-holed by the strategists of the special services under the term “non-Communist or anti-Soviet left”, [who were] also joined by some who repented their support for the Soviet ideal in the first half of the century, among whom was George Orwell.

Michael Warner, a CIA historian, wrote that the strategy of conquering that left was “the foundation of the Agency’s political operations over the next two decades,” cites English researcher Frances Stonor Saunders in her book The CIA and the Cultural Cold War.

The researcher points out that after Orwell’s death in 1950, the CIA, through its cultural front, negotiated with the writer’s widow the making of an animated film based on Animal Farm. [It was]  considered the most ambitious project of its kind to that time.

More than 100,000 handmade illustrations were used for the animated film. Censorship of the original text was exercised, attacking characters [which he had] depicted as pigs, identified as the English and German bureaucracies and governments, which were removed from the final script to highlight anti-Soviet references.

Something similar happened with the film that was made about the other novel, 1984, in which all criticism of capitalist states was blurred. This turned the work into a notorious anti-communist manifesto, paid for with $100,000 dollars from the U.S. government.

Many years later, with the fall of the Berlin Wall in 1989 and the subsequent dissolution of the USSR, the supposed end of history was proclaimed with the victory of the world capitalist system with the United States at its head.

This was the context in which the foundations were laid for the concept of maximum surveillance by the wave of the revolution in new communications and information technologies. This has had a greater impact than ever before on the history of human development in all spheres of society.

The “Big Brother” of Orwellian fiction was established in the new millennium in the virtual world of the Internet. There, the not-so-virtual creeds, yearnings, hopes and information of millions of inhabitants pass. But, unlike the literary image, this new system is built and generalized on programs of artificial intelligence and cutting-edge technology to manipulate society with lies, with media names like “post-truth,” “soft power,” “color revolutions,” “asymmetric wars,” “fake news,” and other concepts.

These doctrines come from the chain production of the centers of the U.S. National Security Agency. They are dedicated to electronic snooping on the secrets of friends and enemies around the globe. [This is done] at the command of the Pentagon and the intelligence community of powerful countries. There, an army of thousands of efficient servants of an empire that seemed destined to surpass by far the ideas of the controversial and censored creator of 1984.