Home The Bolivian Refoundation is Back

The Bolivian Refoundation is Back

The Bolivian Refoundation is Back

The overwhelming absolute majority obtained by the MAS duo spoke loud and clear, and inhibited the possibility of another coup. The Movement Towards Socialism (MAS) also dominated the votes for the House and Senate 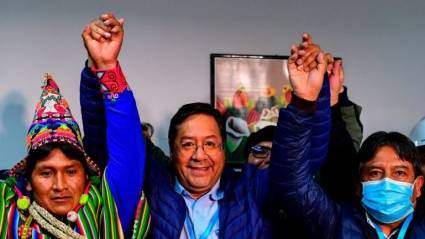 Bolivia gave itself the necessary vote to defeat the coup d’état and not leave any gaps that would make another manipulation possible: 52.4 percent of the votes awarded to Luis Arce, compared to 31.5 percent attributed to Carlos Mesa, constitute a forceful absolute majority in favor of MAS that demolishes the calculations of all the polls, according to which the Movement Towards Socialism won “tightly” with a little more than ten percent of the votes, or it was going to a second round definitively.

The Bolivian refoundation is back and that round is now irreversible, although the slow official count by the Supreme Electoral Tribunal has not yet produced results.

The results of the exit polls, made known shortly after midnight on Sunday, are of such weight that they were recognized, half an hour after they were made public, by the usurper Jeanine Áñez herself, when she congratulated the winning couple through a brief message on Twitter and ended the tension of a thick calm.

This was a step – it must be recognized – in favor of a guaranteed stability, first, by the masses of patient and firm voters who waited in long lines to vote, without yielding to the provocations of an armed and police corps that guarded the schools with long weapons after a week, accusing the followers of the MAS of fraud in advance, and feeding the false possibility of a popular uprising that would give them the excuse for repression and violence, as a way of overturning an overwhelming victory of the left, like this one.

Áñez’s statement buried the possibility of that other feared blow and against which the declarations of the TSE, that had previously suspended the usual system of quick counting by which tendencies are offered on the same election night, weighed heavily, with which the population was left in suspense.

After the fourth press conference given by the incumbent Salvador Romero early in the night and his repeated testimony that the day had been exemplary, it was impossible to question the polls that the Jubilee center had carried out, and whose results were later published by Ciesmori -she affirms that she has the backing and credit of the authorities- through the official television channel Unitel.

It was in this way that those who remained “inside” the social networks, met at the stroke of midnight of the unofficial but already unobjectionable triumph, celebrated with modesty in a brief meeting of the MAS candidates and some of its leaders while, from his refuge in Buenos Aires, its leader, Evo Morales, commemorated in the same way an event that he considered “historic, unprecedented and unique in the world”.

“One year after the coup, we recovered political power democratically with the consciousness and patience of the people,” he added.

Sober and without fanfare, Arce also thanked the people in La Paz and ratified his commitment to work and govern for all Bolivians.

“We are going to recover the country’s economy. We have the obligation to redirect our process of change without hate, learning and overcoming our mistakes,” added the former Minister of Economy, who analysts consider the architect of the good performance of the national economy during the mandates of the MAS, when that area registered a sustained growth unique in Latin America that averaged an annual GDP of eight percent.

In 12 months, Áñez’s dismantling management now leaves a Gross Domestic Product that must contract more than six percent this year, in the midst of the worst economic crisis in 40 years. Even taking into account the damage caused by the poorly managed Covid-19 pandemic -another ballast of Jeanine- this picture expresses the mismanagement of a spurious mandate that “governed” for big capital.

However, beyond the well-earned prestige of Arce and his unquestionable gift of agglutinating, Sunday’s vote breathes the conviction of an electorate that, for the most part, has given its support not exactly to a figure, but to a project whose achievements were clearer the more aggressive was the work of destroying them led by Áñez.

Such a conviction, expressed so massively and firmly in spite of so many elements against it – let us remember the previous persecution and demonization of MAS to the point of opening judicial cases against its cadres including Evo – leaves with a sticky nose those who, once again, when looking at Latin America revive the denied assertions of Francis Fukuyama in the 1990s, when he announced “the end of history”.

The lesson must have been taken by the OAS headliner himself, an acolyte of Donald Trump who orchestrated the coup last year, and an enemy of the most puerile progressivism. With less capacity for resignation than Áñez, Luis Almagro waited for Monday morning to arrive to take the bitter pill.

“The people of Bolivia have expressed themselves at the polls. We congratulate @LuchoXBolivia and @LaramaDavid wishing them success in their future endeavors,” he wrote on Twitter. “I am sure that from democracy they will know how to forge a bright future for their country.

Contestant Carlos Mesa also had to embrace the inevitable, considering that the difference was too great for there to be any change. “It is an outcome that we accept,” he said.

A pending issue and of no small consequence will be the reaction of the armed forces, which in an artful way supported the revolt against Morales last year?

But the Latin American and Caribbean reversion, thought out and raised from the centers of power, has suffered another defeat. After the return of Peronism to the Argentine government, the return of Masismo indicates that, as much as it still has to perfect itself and learn, the model that takes man as the center as an alternative to that other system that breathes at the rhythm that the market inhales and exhales has not failed.

On the contrary, the neo-liberal execution shows today its shortcomings in the repeated popular mobilizations that are shaking countries like Colombia and Chile.

The Bolivian masses have shown that despite the injustice and the dirty war, the possibility of changing the status quo remains open if there is clarity, consciousness and the ability to resist.

Horizontal Victory
The exit polls carried out by the Jubilee Foundation and the Ciesmori company show a victory for MAS in both chambers of the National Assembly.

According to their counts, the MAS would obtain 19 seats in the Senate out of the 36 it has, while two seats would be in dispute between that political force and the Citizens’ Community (CC) in Potosi and Santa Cruz, reported Telesur.

According to Jubilee information, MAS won five of the country’s nine departments: La Paz, Cochabamba, Potosí, Oruro and Pando, while Carlos Mesa’s Citizen Community won in Chuquisaca, Beni and Tarija. Finally, Creemos’s candidacy, led by Luis Fernando Camacho (who won 14 percent of the votes in the presidential race), would be the winner in Santa Cruz.

Greetings from the left
Politicians from the Latin American and Caribbean left immediately spoke out on the social network Twitter:

Congratulations to #MAS, which has recovered at the polls the power that was usurped by the oligarchy, with the complicity of the #OAS and the imperial guide. #Cuba shares joy for the triumph of #LuisArce. The Bolivarian ideal is reborn. (Miguel Díaz-Canel Bermúdez, Cuban President)

I congratulate the Bolivian people for having restored democracy. Congratulations to Luis Arce and my friend Evo Morales who after a difficult year can see the popular vote respected. (Luiz Lula da Silva, former Brazilian President)

Congratulations to Lucho Arce and David Choquehuanca who, together with Evo, built a great popular triumph in Bolivia. The happy Patria Grande. (Cristina Fernández, Vice President of Argentina)

Great Victory! The Bolivian people, united and conscious, defeated with votes the coup d’état that they gave to our brother Evo. Congratulations to President-elect Luis Arce, Vice President David Choquehuanca and our Indian Chief of the South @evoespueblo. Jallalla Bolivia! (Nicolás Maduro, President of Venezuela)