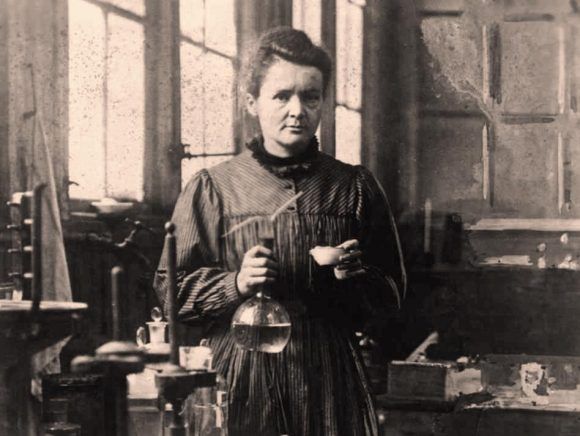 Maria Curie was a Polish physicist, mathematician and chemist, and a naturalized French citizen. She was the fifth daughter of Władysław Skłodowski, a high school teacher in physics and mathematics like her grandfather, and Bronisława Boguska, who was a teacher, pianist and singer.

In 1891, at the age of 24, Maria enrolled in the Mathematical and Natural Sciences Department at the Sorbonne University in Paris, France. From that moment on, Maria was renamed Marie Skłodowska. Despite having a solid cultural background acquired in a self-taught way, Marie had to work hard to improve her knowledge of French, mathematics and physics, in order to keep up with her peers.

In 1893, she obtained a degree in Physics and came first in her class; in 1894, she also graduated in Mathematics, coming second in her class. In that year she also met her future husband, Pierre Curie, who was a professor of physics. The two began working together in the laboratories and married on July 26, 1895.

After a double degree, the next challenge was to obtain a doctorate. Up to that time, the only woman who had been awarded a doctorate was the German Elsa Neumann. The first step was to choose the topic of her thesis. After discussing it with her husband, they both decided to focus on the work of physicist Henri Becquerel, who had discovered that uranium salts transmitted rays of an unknown nature. This work was related to the recent discovery of X-rays by the physicist Wilhelm Röntgen. Marie Curie became interested in this work and, with the help of her husband, decided to investigate the nature of the radiation produced by uranium salts.

The first, in 1898, was named Polonium in reference to their native country. The other element was named Radium, due to its intense radioactivity. Pierre had periods of great fatigue that even forced him to rest in bed, and both suffered burns and sores from their dangerous radioactive work. Shortly thereafter Marie obtained one gram of radium chloride, which she achieved after handling almost eight tons of pitchblende. In 1902 they presented the result, which brought them fame. Both Pierre and Marie accept and lend all their research without making any profit from it by means of patents, a fact that is applauded by the whole world.

On April 19, 1906, a tragedy occurred: Pierre was run over by a six-ton carriage and died without anything being done for him. Marie was greatly affected, but continued with her work and refused a life pension. She also took over her husband’s professorship and was the first woman to teach at the university in the 650 years since its founding. On November 15, 1906, Marie Curie gave her first lecture. Expectations were high, as it was the first time a woman had taught a class at the university. A large number of people attended; many of them were not even students. In that first session, Marie spoke about radioactivity.

In 1910 she demonstrated that a gram of pure radium could be obtained. The following year she received the Nobel Prize in Chemistry “in recognition of her services to the advancement of Chemistry by the discovery of the elements Radium and Polonium, the isolation of Radium and the study of the nature and compounds of this element”.

With a disinterested attitude, she did not patent the process of Radium isolation, leaving it open to the research of the entire scientific community. Marie Curie was the first person to be awarded two Nobel Prizes in two different fields. The other person to have won it so far is Linus Pauling (Chemistry and Peace). Two Nobel Prizes in the same field have been won by John Bardeen (Physics) and Frederick Sanger (Chemistry).

A few months after her last visit to Poland, in the spring of 1934, Curie, after going blind, died on July 4, 1934 at the Sancellemoz Clinic, near Passy (Haute-Savoie, France), from aplastic anemia, probably due to the radiation to which she was exposed in her work, and whose harmful effects were still unknown. She was buried next to her husband in the cemetery of Sceaux, a few kilometers south of Paris.

Sixty years later, in 1995, her remains were transferred, together with those of Pierre, to the Pantheon in Paris. In the speech delivered at the solemn entry ceremony, on April 20, 1995, the then President of the French Republic, François Mitterrand, addressing especially her grandchildren and great-grandchildren, emphasized that Marie had been the first woman to be buried in the Pantheon, noted that Marie, who had been the first French woman to be a Doctor of Science, to be a professor at the Sorbonne and also to receive a Nobel Prize, was again the first French woman to be laid to rest in the famous Pantheon in Paris on her own merits (in which she remains the only one to this day).

Her eldest daughter, Irène Joliot-Curie (1897 – 1956), also won the Nobel Prize in Chemistry, in 1935, one year after her mother’s death, for her discovery of artificial radioactivity.

She founded the Curie Institute in Paris and in Warsaw, and in addition to the two Nobel Prizes, won the Davy Medal in 1903, the Matteucci Medal in 1904 and the Willard Gibbs Prize in 1921.