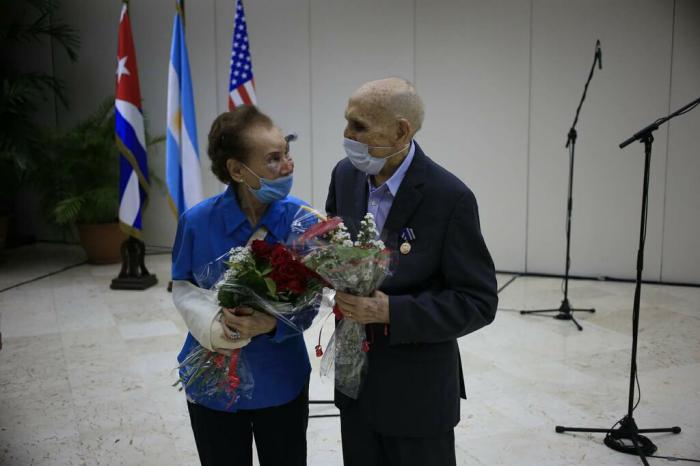 The event was chaired by Bruno Rodríguez Parrilla, Minister of Foreign Affairs of Cuba (Minrex), and Alpidio Alonso Grau, Minister of Culture (Mincult), who personally presented the award.

If bravery is a quality to face each step in life with courage, it is abundant in the political and artistic career of Estela and Ernesto Bravo. She, a North American, he, an Argentine, supportive, internationalists and Cubans by conviction since they decided to share dreams and destiny in the homeland of Marti and Fidel.

The Distinction for National Culture awarded to both of them last Saturday honors their passionate contributions to art and their permanent commitment to the ethical values and ideals of justice advocated by revolutionary Cuba.

Culture Minister Alpidio Alonso presented the award to the Bravo couple in a ceremony attended by Bruno Rodríguez Parrilla, a member of the Party’s Political Bureau and Minister of Foreign Affairs, during which the poet Nancy Morejón gave the words of praise.

Estela’s contribution to the documentary screen as a director, always assisted by Ernesto as a scriptwriter, consultant and coordinator in the tasks of production, stands out among the most lucid and penetrating in the cinema of the last four decades, starting with the 1980 release of Los que se fueron [Those Who Left].

With a catalog of more than 30 works of diverse footage, a substantial part of the Bravos’ filmography bears witness to events related to Cuban migration to the United States and the traumatic human and family cost of the hostility of that country’s rulers towards Cuba.

It is worth looking at the Latin American and Caribbean context of the time of the dictatorships and the US interventions in the region.

But, without a doubt, the most endearing productions of Estela and Ernesto are those that have had the historic leader of the Cuban Revolution in the forefront. Fidel, the untold story is revealed as one of the most complete portraits of the Commander in Chief’s personality.