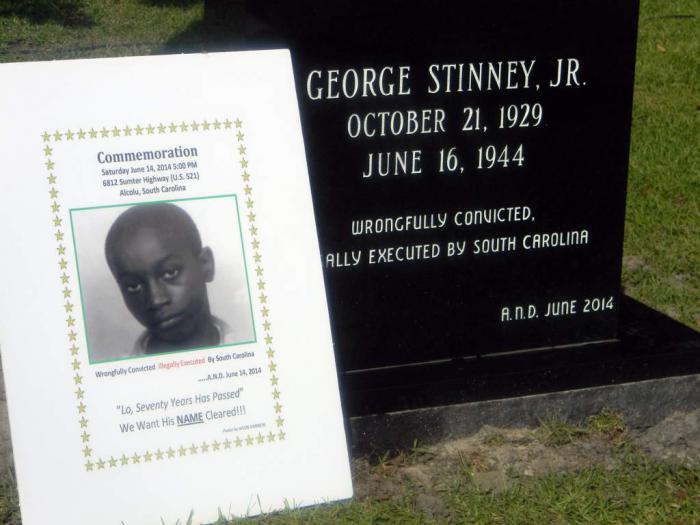 George Stinney, the Boy Condemned to the Electric Chair

George Junius Stinney Jr. was convicted in March 1944 of the murder of the two girls, ages 11 and 8, in a speedy trial by a jury of white men. George was executed in the electric chair on June 16 of that year.

George Junius Stinney Jr: was convicted in March 1944 for the murder of two girls aged 11 and eight Photo: ABC

A boy looks scared into the camera of the Clarendon police photographer. After long hours of brutal interrogation, he had just confessed to a crime he had not commit.

Whoever pressed the shutter of the camera captured the pure image of fear and innocence; George Stinney’s police photo is not just any photo.

Stinney was a boy from Alcolu, Clarendon, a small town in South Carolina. His life was the life, you might say, of an African-American boy in that region.

George was tending the family’s cows with his sister Amie that day when two white girls, Mary Emma Thames and Betty June Binnicker, approached them to ask about some medicinal plants they were looking for. George and Amie did not know the plants, so the girls went on their way.

Hours after the meeting, the girls’ parents, concerned, went out to look for them. George offered to help when they passed by his family’s farm and told the parents about the conversation he had with the girls.

The bodies of the girls were found near a Missionary Baptist church, showed signs of sexual abuse and had been killed using a 25 kg wood.

The police arrested George and took him in for questioning, in a process that involved many irregularities, physical abuse and psychological torture. The child was not represented by any lawyer and was not allowed the company of his parents, despite being a minor, he was only 14 years old.

They said that he had confessed to the crime, but no evidence of the confession was ever produced, it was the word of the police against that of the black child. His sister–witnessing that Stinney had been with her all afternoon, so she could not commit the crime–was threatened and harassed, so she had to flee the area in the face of the real possibility of being lynched, as some villagers had promised to do.

George Junius Stinney Jr. was convicted in March 1944 of the murder of the two girls, aged 11 and 8, in a speedy trial by a jury of white people. George was executed in the electric chair on June 16 of that year.

In 2014 the case was reviewed and justice ruled that the boy had not received a fair trial and he was found not guilty. The problem is that this verdict came 70 years too late.