“I’m also among the candidates” 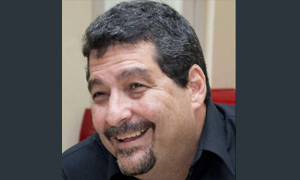 “I’m also among the candidates”
by Antonio Guerrero

Antonio Guerrero, a member of the group of comrades Heroes of the Republic known as The Five, referred in his Facebook profile to the post of Raul Capote on the same social network entitled “I AM IN THE CANDIDATURE”. It is not surprising that those who rushed to take advantage of the words of the wife of one of our heroes to attack the legitimacy of the ongoing electoral process in Cuba, against the intention of that comrade, now keep silent on both Tony’s words and those of another Hero of the Group of Five, Gerardo Hernández Nordelo, which we published before.

Capote, the last time we met I told you about my limitations to get into the networks [the internet]. I have read your writing and here I am trying to publish something. I AM ALSO AMONG THE CANDIDATES. “The well-told truth, said in time dissipates, as if they were smoke, its enemies.” And I continue with the Apostle. “The duty of a man is where he is most useful.” And “[it] must be fulfilled simply and naturally”. If everyone does their part “nothing can defeat us”.

And what I think is essential to Marti’s thoughts: “If I ever was of any use, I can’t remember: what I want is to be of more use”.

Faithful always to Fidel and the Revolution.

EVER ONWARD TO VICTORY!

Words from Raúl Capote on his Facebook profile to which Tony refers:

In the candidacy for the ANPP there are those who have to be. There are the workers, the peasants, the students, the humble citizen and the brilliant professor, the heroes and the unknown, working men and women, the Chinese, the black, the mulatto, the white… a broad spectrum of Cuban society.

That the modest and unknown student, almost adolescent, is there, is good; that the peasant from way out in the mountain, the self-employed, our next-door men and women,  women of the neighborhood, very, is very, very good.

There are the non-state sector, health, research, education, as well as the peasant and the cooperative member, workers of culture, the media, the military, sports, religious institutions and social organizations.

We are not going to vote for an assembly only of generals and doctors, there are the people, the free country represented in all its dignity.

Of the 605 Parliament candidates nominated on January 21, 47.4% are delegates from constituencies; therefore, all municipalities in the country will have representation in Parliament with at least two deputies, and one of them of municipal origin.

Women represent 53.22%, which places us as the second Parliament in the world with the largest female participation, “The vote of an entire people, of all the constant and visible entities of the Cuban people that can speak frankly, is an honor such that it anoints the one who receives it, cleanses his heart of the passions that could disturb him, and magnifies, as if by divine dispensation, the sworn forces over all the obligations of the earth, taking it to the first and foremost one: to build man a safe and decorous house on the independent soil of the homeland”. (Jose Marti)

Our democracy, new, sincere and truly popular, is based on Marti’s principle, With all and for the good of all; and it needs, given the danger of the greater war that is being waged against us, the unity of the revolutionaries. Such is the main legacy of Fidel, UNITY UNITY UNITY

Comrades all, let us all vote for all. I am also among the candidates, not in name but worthy and fully represented.