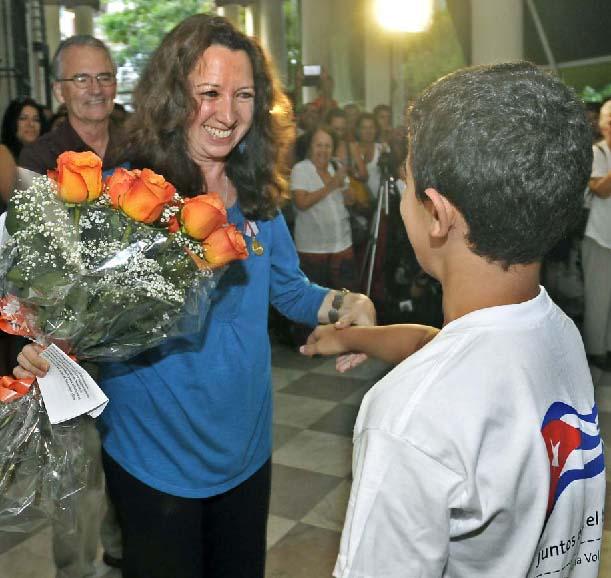 Her fundamental work was the struggle for the release of the Five Cuban patriots, unjustly imprisoned for monitoring terrorist activity in the United States against Cuba.
By Nuria Barbosa León
January 12. 2022

Upon receiving the Friendship Medal, she reaffirmed her commitment to defend the Cuban Revolution until her last days. Photo: José Manuel Correa

The First Secretary of the Central Committee of the Communist Party of Cuba and President of the Republic, Miguel Díaz-Canel Bermúdez, lamented the death of the tireless Argentine fighter Alicia Jrapko, who devoted her life to fight for justice on behalf of her disappeared comrades. She fought with determination for the return of Elián González, the freedom of the Five and against the blockade.

“Farewell sister,” Diaz-Canel wrote on Twitter. Also, Foreign Minister Bruno Rodríguez Parrilla expressed his heartfelt condolences for the death of the solidarity activist of Argentine origin and resident of Oakland, California, who had to fight against a malignant tumor for more than two years.

#Cuba mourns the death of the tireless Argentine fighter Alicia Jrapko, who devoted her life to fight for justice on behalf of her disappeared comrades. For the return of Elián, the freedom of the Five and against the #Blockade she fought to the end. Farewell sister. pic.twitter.com/yqeJKDFxux
– Miguel Díaz-Canel Bermúdez (@DiazCanelB) January 12, 2022

Granma spoke with her during the solidarity event held in Havana from November 1-3, 2019, where she expressed her faithful activism as coordinator of the International Committee for Peace, Justice and Dignity of the Peoples in the US.

She urged us to “reflect on the fact that today the U.S. is a convulsed society with a decaying system. The government chooses which countries to attack and which to support, depending on their behavior in the face of imperial laws. Today the enemy for them is Venezuela, Cuba, Bolivia, Syria and other nations that have chosen to protect their sovereignty without bowing to imperialist interests.

It was with deep sorrow that we learned of the passing of Alicia Jrapko, a close friend of #Cuba and a devoted defender of just causes. Her support to the struggle for the return of the Five and for the end of the blockade was extraordinary.

“Cuba has done nothing to the U.S., it has never attacked it, but that government must justify its actions to divert attention so that people cannot reflect on the chaos inside the country. There are many internal problems in terms of unemployment, racism, drugs, murders and other evils. It is a society that shows a face of hatred, xenophobia, instead of messages of love and peace,” argued the woman who headed the International Committee for the Freedom of the Five in the United States.

“I have hope, because in the United States we unite and fight to conquer our rights. Every day we fight and somewhere that society is going to explode,” said Alicia Jrapko, winner of several distinctions, among them the Felix Elmuza Medal awarded by the Union of Journalists of Cuba, the Shield of the city of Holguin and the Friendship Medal granted by the Council of State of the Republic of Cuba, at the proposal of the Cuban Institute of Friendship with the Peoples.
———————————————————————————————————–
Video: Cuban TV prime-time news report on Alicia Jrapko’s passing. No subtitles.