Posted on June 28, 2018 – 12:44 by Yoel Almaguer de Armas
Translated and edited by Walter Lippmann for CubaNews.
Don’t miss the translation note at the end. Thanks.

A woman in her fifties was talking to a relative in the lobby of the Hermanos Ameijeiras Hospital about her smoking. She said that her style of doing it didn’t hurt her, and that despite having that habit since she was 14 years old, she is a still a real babe. 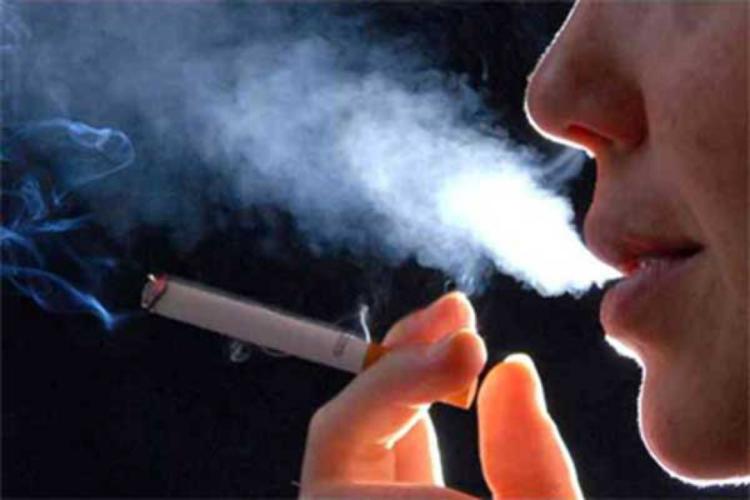 The World Health Organization predicts that smoking will cause 450 million deaths in the next 50 years. Photo: Taken from the newspaper Peridico 26

“Unlike my sister, who looks like a train puffing smoke, I have never swallowed it or talked about it while I have a cigarette in my mouth, and after smoking, I drink a glass of water so that the nicotine doesn’t hurt my airways.”

The gentleman who accompanied her told her that the cigar was not good in any of its forms and that the glass of water was an invention of hers. He told her that his grandfather was a country man, that he had a huge meadow in Pinar del Río and loved to chew tobacco.

“And she died of lung cancer?” she asked, half doubtful, suspicious.

“No, he got tired of living and died of something else.”

There was a time of silence between the two of us. I expected a reaction from her, because I knew she would comment on something, anything, to justify her vision as a smoker.

“Doctors always say that smoking causes lung cancer, but there are a lot of people with lung cancer who have never put one in their mouths.”

To corroborate the lady’s idea a little, the Cuban Journal of Hygiene and Epidemiology wrote in one of its issues that tobacco is associated with cancer of the mouth, pharynx, larynx, esophagus, stomach, pancreas, cervix, kidney, ureter, bladder, blood system and, especially, lung.

Studies published in issue 44 of this magazine show that women who smoke tend to have an earlier menopause and have a double risk of developing lung cancer than men, while men, when they smoke one pack a day, increase their risk of suffering from erectile dysfunction and premature ejaculation by 40%.

The lady, who was waiting for a test result in the lobby of the hospital in Havana, is one of the many people who wake up with a little coffee and a cigarette in their mouth, and when they don’t have them, they have a headache and the day is pure sorrow.

From the moment I heard it, I thought of an alternative that would help her reduce her addiction, until she quit smoking. She didn’t know I was a journalist because I didn’t tell her, either. You may read this paper and know that it is intended for her and everyone who has ever tried to quit smoking and has not been able to.

The World Health Organization, WHO, explains that tobacco kills more than 7 million people each year. Of these, more than 6 million are consumers of the product, and around 890,000 are non-smokers exposed to second-hand tobacco smoke.

WHO also states that in adults, smoke from other serious cardiovascular and respiratory disorders, particularly coronary heart disease and lung cancer, causes sudden death in infants and low birth weight in pregnant women.

The same Organization states that tobacco is the leading preventable cause of death in the world, and tobacco use is expected to cause 450 million deaths in the next 50 years.

The one who is a “titi” is one of the many people who recognize the negative effect that smoking cigarettes has on their health, and often have the obligation to quit when it causes them to say between life and the addiction to smoke.

TRANSLATION NOTE: The Spanish headline is “Yo soy una “titi”. It’s a Cuban slang expression referring to a still-attractive, but no longer as young, female. Because it’s slang, I asked two Cuban translators. The first, a female in her seventies wrote:

A titi is slang for a very young person. In that context she means she looks and feels very young despite her 50’s.

The second, male in his fifties, wrote:

As to “titi”, very common too. It’s just slang (although not offensive) to refer to someone who looks really good, young and/or healthy (especially in cases of middle-aged people), and it can be used for men and women alike. Now, you would only call a woman “estas hecha un titi” when you’re close to her. Behind a woman’s back, it’s as common a sex-related remark as any other, like “Look at that temba (a woman in her 40s or 50s, remember that one? Like in discotemba?), she’s kind of old and yet see how tasty she looks”. But even if my grandmother complains about how weak or sick she feels because of her old age, I could very well use that expression and tell her, “Don’t say that, you look really great!” (…estas echa un titi). Hope you get the picture.