Secretariat of the Central Committee, at the forefront in the direction of the Party’s work.

With full presence in the political, economic and social life of the country, the members of the Secretariat professionally deal with the daily activities of the Party, for which they control, in their sphere of action, and with the help of the auxiliary structure of the Central Committee, the work of the institutions and agencies of the State and the Government. 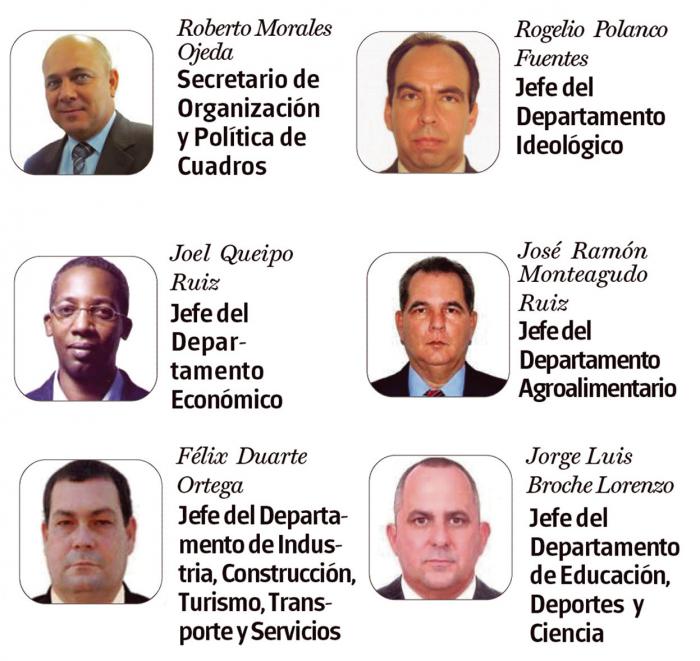 The intense days of debates that took place during the 8th Congress of the Communist Party of Cuba outlined the ideas, concepts and guidelines that will guide today and in the future the work of the organization at all levels.

To continue strengthening the performance of the Party in the political-ideological work, to raise the combativeness and exemplarity of the militants and cadres, and to intensify the control, demand and participation of the people to promote the economic and social development of the country, are among the priorities that demand greater commitment from the organization, in order to consolidate and improve what has been achieved.

The Secretariat of the Central Committee is immersed in this challenging scenario, which calls for dynamizing the functioning of the Party, deepening its link with the masses and adapting its higher and intermediate leadership structures to the current and future responsibilities.

Integrated today by six comrades with a wide trajectory in the ranks of the organization, this is the organism elected by the Plenary of the Central Committee which, subordinated to the Political Bureau, assists it in the direction of the daily work of the Party.

In this endeavor, the Secretariat is in charge of organizing and ensuring the fulfillment of the agreements and resolutions of the Congress, the national conferences, the plenary sessions of the Central Committee and the meetings of the Political Bureau.

It is also responsible for the way in which the Party relates with the Young Communist League (UJC), the organs and agencies of the State and the Government and the social and mass organizations; at the same time it orients and controls the application of the Party’s policy regarding the ideological, economic and social activity of the country.

Its functions also include directing the functioning of the auxiliary structure of the Central Committee and, in turn, preparing draft directives or other documents to be submitted to the consideration of the plenary sessions and meetings of the Political Bureau.

Guiding and controlling the activity of the intermediate leadership bodies, in the fulfillment of the decisions of the congresses, conferences and the Political Bureau, as well as carrying out the daily practice of the Party’s international relations, also distinguish the work of the Secretariat.

In close coordination with the National Defense and Security Commission, this body contributes to the orientation and control of matters related to defense, state security and the internal order of the country.

Its competencies include, meanwhile, the implementation of the cadre policy of the Party and the ujc, as well as the control of the same in the mass and social organizations, the organs, agencies and entities of the State and the Government.

In accordance with its responsibilities regarding the internal functioning of the Party, the Secretariat also analyzes and adopts the pertinent decisions on income, deactivations and sanctions that fall within its competence.

With full presence in the political, economic and social life of the country, the members of the Secretariat professionally deal with the daily activities of the Party, for which they control, in their sphere of action, and with the help of the auxiliary structure of the Central Committee, the work of the institutions and agencies of the State and the Government, and, at the same time, evaluate the situation and prospects of the sectors they serve and propose to the leadership of the Party the appropriate measures.

1 year ago GranmaCuban Politics, PCC0
Silencing the Study of Race and EquityOn the desertion of César Prieto