The women of Pinar del Río spoke about the role of Cuban women in the defense of their country during the parliamentary hearing on Women’s Voluntary Military Service, sponsored by the Committee on Defense and Internal Order of the National Assembly of People’s Power

Translated and edited by Walter Lippmann for CubaNews.. 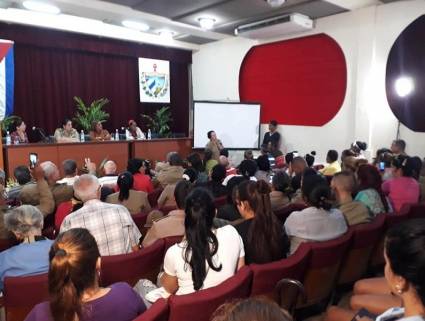 In the audience it was revealed that in the Women’s Voluntary Military Service duty and opportunity are combined for many young women Author: Zorileidys Pimentel Miranda Published: 26/11/2019 | 10:43 pm

PINAR DEL RÍO: The Women’s Voluntary Military Service (SMVF) is still a taboo in some Cuban families. Getting used to the boots, the olive green uniform, the backpack, the guards, the hikes, the days in the field, is very hard for women, according to many people.

However, there are families who are grateful that their daughters are living this experience. This was evident during the parliamentary hearing on the SMVF held on Tuesday in Pinar del Río, sponsored by the Committee on Defense and Internal Order of the National Assembly of People’s Power (ANPP).

The testimony of Odalys Orraca Castillo, mother of a young woman who was a member of the Border Brigade in Guantanamo, reached the audience. “It is always difficult to accept that a son is going to walk away. In our case, we already knew that our daughter was willing to comply with the SMVF and therefore there was an acceptance and we were all convinced that this was the best thing for her.

“The separation was difficult, but we remained calm because we always knew that they were well cared-for in every way. In the first two months after starting military service, my daughter told me: “Mom, don’t cry or worry anymore, because we are very happy; it is true that we have to work and do all the activities, but we also have fun, we have a good time, and above all, we learn a lot”.

Like this one, other stories came to the parliamentary hearing, which was attended by fighters of the Revolution, cadets, family members and representatives of various organizations and institutions from the territory.

Such was the case of Yusleidys Hernández Hernández, a member of the National Committee of the Young Communist League (UJC), who, for six months, learned what life is like in a military unit. “It was a unique experience for me. It contributed a lot to my training. Now I am more disciplined and consistent with the tasks of the Revolution. I feel great pride and satisfaction in being prepared to defend the country in any circumstance,” she said.

Then, she added that from the UJC, together with the Federation of Cuban Women, “We carried out exchanges in the educational centers, we showed videos about women who have lived this experience, we talked with the parents and we had concrete results.

For her part, Yilena Valdés Llano, a 19-year-old who finished her military service last August, said it was a 12-month apprenticeship. “I reached an incredible degree of maturity, it also taught me about military life, everything I need to know to defend the country. In addition, I was able to study and today I am in the first year of my degree in rehabilitation, something I am very passionate about.

Also participating in the hearing was Major General José Antonio Carrillo Gómez, president of the Defense Committee of the ANPP and of the Association of Combatants of the Cuban Revolution, who reiterated that at present, along with the economy, defense continues to be the great task of all Cubans to maintain our social system.