Home Revolution’s strength is in the neighborhoods

Revolution’s strength is in the neighborhoods

The Revolution’s strength is in the neighborhoods (+ Video)

The President of the Republic arrived this Friday to La Timba to appreciate the resuscitation actions that have been carried out there for a few months. This time he was accompanied by the first secretaries of the provincial committees of the Communist Party and the first secretary of the Municipal Committee of the Party in the special municipality of Isla de la Juventud, who are in Havana to participate in the II Plenary Session of the Central Committee 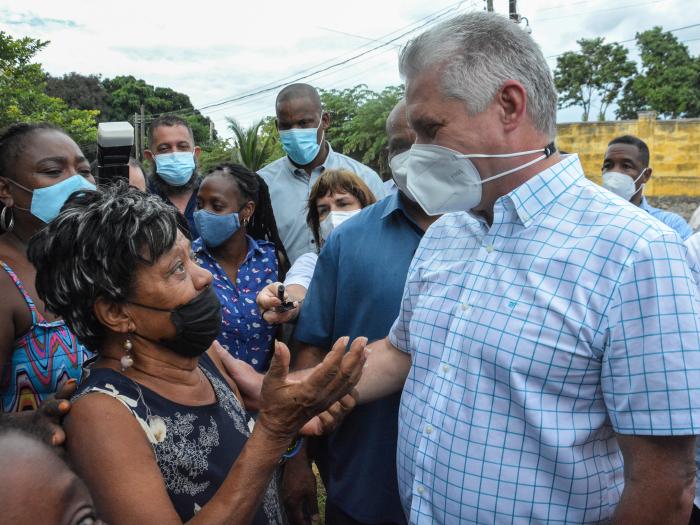 The First Secretary of the Party and President of the Republic Miguel Díaz-Canel Bermúdez called on the residents of La Timba to continue and not stop in everything that is being done in this vulnerable neighborhood. Photo: Revolution Studios

From a balcony the child’s voice overcame the noise of the patching equipment and the bustle of the people. The President heard him. He slowed his pace. He turned his face away. He raised his hand in greeting and smiled back at the boy.

The hustle and bustle continued in La Timba, one of the 65 neighborhoods that are part of the transformation experienced by deep places in the Cuban capital, and one of which the Head of State arrives every week.

The president shared with them the experience that has multiplied in Havana since July, with the challenge of “extending to the entire country, taking into account the particularities of each territory.”

The tour had begun at the Gustavo Pozo elementary school, where the first secretary of the Municipal Committee of the Party in Plaza de la Revolución, Leira Sánchez Valdivia, spoke to them about the development challenges that distinguish the municipality, including the management of differences that are generated in an environment where large buildings and 53 citadels converge.

«In La Timba a dream is being built; now we are at a starting point that will continue to give us content to work more, “he said, and then detailed about the 47 works in which constructive actions are carried out, all of high interest to the population, such as the winery, various markets , the family doctor’s and nurse’s office, a post office, and more.

La Timba’s road structures were well defined since its inception, but the neighborhood “has grown disorderly” over the years and its streets require extensive paving and patching.

In the midst of these tasks, the President toured the community, greeted the small groups of workers, asked them about the works and continued to advance: in recent months here, more than 300 tons of asphalt have been used in patching actions and they have repaired almost 150 cubic meters of sidewalks.

“With these actions and later, when all the buildings and properties are painted and repaired, the streets have another life,” Díaz-Canel told a group of neighbors, whom he called “to continue and not stop in everything that is doing”.

Are you aware of the priorities? Do you agree? ”He asked again and again as he advanced through the busy crowd, which barely stopped to greet him.

Thank you, President! Thanks, mijito! Thank you! ”Were phrases that some shouted from afar and others –those who, no matter how fast or well located, could bump fists with the president– would burst out at him when they were close to him.

La Timba is a people that trusts in its Revolution, that is grateful. Mayra Arevich Marín, Minister of Communications – the organization that sponsors this neighborhood – reminded Díaz-Canel how in the first days of beginning the resuscitation work in the community, she thought that the people would never join. That was only at the beginning, he said, then the participation overflowed all spaces.

Because among the priorities defined by the community are the ways to initiate actions, one of the most important that is currently being carried out in La Timba is aimed at the conservation and maintenance of buildings, the construction of new homes for people who they live in critical condition, and the rehabilitation of citadels with their infrastructures.

More than a thousand families in the community –with some 4,000 inhabitants– will benefit from some of these actions. The President wanted to know about it, without any reports, retracing the streets and “asking permission” to break into the humble homes that today are filled with hope.

In the eventfulness of the journey, it was impossible to keep track of how many homes he visited. He entered, walked, filled the neighbors and builders with questions, left, advanced on the journey, and again the cycle was repeated. Each family has a story to tell, and in each family singularities can be discovered, which also help to solve many problems in the country.

La Manigua is a cultural and creative center that runs in the heart of La Timba, and aims to become an innovative space, where girls and boys can learn, experiment and have fun with Cuban history, art and culture, through the humor and the values ​​of Juan Padrón’s work.

Near the place of the constructive actions, Silvia Padrón, daughter of the revered Cuban cartoonist, explained to Díaz-Canel that the place will be the materialization of “a dream that my father had, of seeing his work transcending the world of cartoons, where the children could interact with her, experiment and connect ».

Then this idea came up, “which is a gift for the Cuban family; It will be very connected to La Timba, but it is a gift for the whole city. The idea is that the people who come can, based on the values ​​of the work itself, connect with the best of being Cuban and enjoying the game. This is what this site is all about: people are going to learn by playing, having fun.

Thus, during the tour, Díaz-Canel and those who accompanied him were able to learn about different community projects that are developed and implemented in La Timba, including one that they have decided to call Entimbalao, and that has come to life in a park, where adolescents and young people play sports with skateboards.

Here the boys themselves have participated with their opinions in the design of the park, and according to the leader of the project, once completed, it will also contribute to improving the quality of life in the neighborhood and expanding recreational offers.

The tour concluded at the Plaza Cultural Center. There, a fruitful exchange between President Díaz-Canel and the party leaders who accompanied him took place, along with them also the member of the Political Bureau and Secretary of Organization and Politics of Cadres, Roberto Morales Ojeda; the Minister of Communications, Mayra Arevich Marín, and the Governor of Havana, Reinaldo García Zapata.

For more than an hour, useful experiences were shared from that stage that ratified the urgent need for resuscitation actions carried out in capital neighborhoods to reach all the country’s territories.

Among other issues, Díaz-Canel spoke then of joint work, always listening to what the community wants and needs as a key to strengthening this experience and making it sustainable over time. He underlined the importance of fostering public debates, where the population participates; the transparency of the procedures; hone the role of the delegate; and assume with ever more sensitivity the problems that exist in our communities.

And because “the strength of the Revolution is in the neighborhoods,” the First Secretary of the Party’s Central Committee insisted on constantly looking at them and learning from the many lessons that the people always leave us.

To the inhabitants of the community, who were waiting for his departure from the Cultural Center to greet him, the Head of State asked to continue working as they have done so far: together with the organizations that have arrived to support them.

That everything we do – he added – is because you propose it and you need it. “There are many problems and we cannot solve them at once, but every day we are going to be tearing a bit out of each one, and thus we are going to move forward,” he explained.

In them he left the challenge of “supporting that everything is done with quality and nothing is violated that are motivations and aspirations of the population in the neighborhood.”
TEN MORE PHOTOS:
https://www.granma.cu/cuba/2021-10-22/vuelve-diaz-canel-a-la-barriada-capitalina-de-la-timba