“Now we have to put up with the hurricane, with effort and will” (+Video)

The President of the Republic and the Prime Minister, together with members of the Government team, carried out an extensive day of work this Sunday in the province of Pinar del Río and the special municipality of Isla de la Juventud to assess the damages caused by Hurricane Ida in both territories, amid the complexities imposed by the COVID-19. 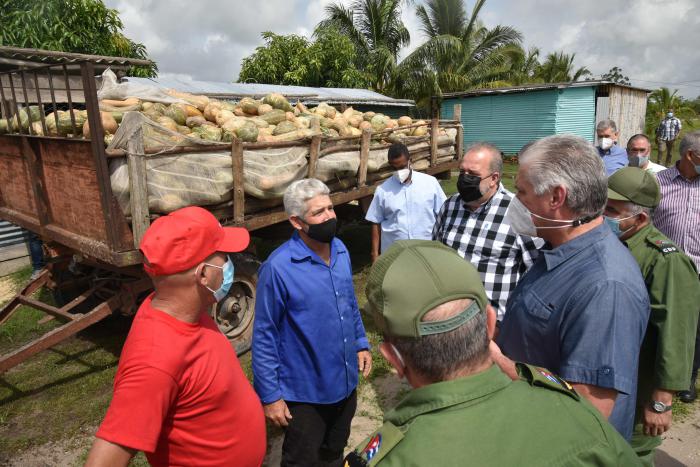 The way in which the damages caused by Hurricane Ida are being restored shows that there is coherence, capacity and organization, said the First Secretary of the Central Committee of the Communist Party and President of the Republic, Miguel Díaz-Canel Bermúdez, at the end of an intense work tour yesterday afternoon, as part of which he arrived early in the morning in the province of Pinar del Río, and in the afternoon, in the special municipality of Isla de la Juventud.

Accompanied by the member of the Political Bureau and Prime Minister, Manuel Marrero Cruz, as well as by a representation of the country’s government team, the Head of State was able to verify at different points of both territories the progress in the clean-up work, the recovery of the affected planting areas, the restitution of the main services that were interrupted and the response that is beginning to be given to the quantified damages in the houses.

The work that has been carried out,” he said, “shows that there is a spirit in our people to overcome adverse situations caused by events of this type. This, he emphasized, gives us confidence and optimism to be able to move forward in the midst of so many difficulties that we have had to face in recent times; furthermore, it is an expression of unity and understanding of the problems we have and that we must continue to face. 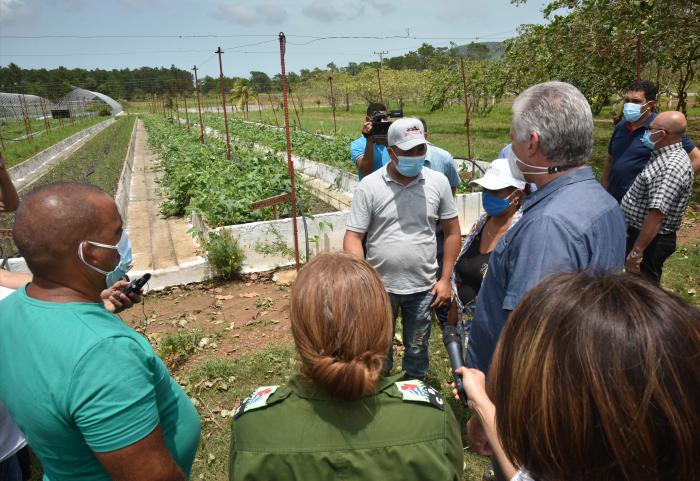 BETWEEN THE ONE-WAY COMPLEXITIES AND THE PANDEMIC

“Now, none of the products that have been recovered should be lost”, was one of the main ideas reiterated by the President in Pinar del Río, when he exchanged views with producers whose crops were affected by the hurricane.

It is precisely in agriculture that the greatest effects of the meteorological phenomenon in the province have been observed. Preliminary data, offered by Governor Rubén Ramos Moreno, speak of 687 tons of yuca and 551 tons of plantain, as well as losses of boniato and pumpkin. Everything that could be recovered -he assured- was sold to the population.

While touring areas of the Hermanos Barcón productive pole, one of the main ones in Pinar del Río province, the Head of State insisted to producers and managers on the priority to work to achieve a short-cycle planting strategy, which will allow for the availability of more products, the immediate recovery of plantain plantations and an increase in harvest and replanting.

No time can be lost in planting,” he stressed, “because this is a good time to take advantage of the moisture left by the rains. One of the great challenges, he stressed, is to achieve greater diversification of crops, which will make it possible to meet the food demands of the population today.

During the meeting with the main authorities of the province, he also reported on the damage caused to houses by Hurricane Ida. Preliminary figures showed that 148 buildings were affected, two of which were counted as total collapses and 109 with partial losses in their roofs. It was reported that since the Recovery Phase was declared, the movement of resources to different places began in order to respond as soon as possible to the situation of the properties.

Regarding the reestablishment of the electric service, it was learned that the arduous work that has been carried out had allowed, in the morning hours of yesterday, the recovery of almost 70% of the damages. According to what was explained by the Minister of Energy and Mines, Liván Arronte Cruz, five workgroups from the provinces of Havana and Matanzas will arrive in the next few hours to reinforce the recovery work.

Regarding the rainfall, the authorities of the territory expressed that it was mostly beneficial, especially in the municipalities of San Juan y Martínez and Isabel Rubio.

In the midst of the new complexities left to Pinar del Río by Hurricane Ida, the Head of State insisted on not neglecting for a moment the actions to confront covid-19 in the territory, which during the last days has shown high levels of transmission of the disease.

Ariel Godoy del Llano, provincial director of Public Health, commented that in recent days there has been a decrease in the number of people with symptoms in health institutions. More than 4,000 people remained at home this Sunday, which is a great challenge. He also referred to the vaccination of the population over 19 years of age in the main municipality and in population groups at risk in the other municipalities, which is a guarantee to advance in the protection of people and reduce the rates of infection.

WORK HAS BEEN CARRIED OUT IN AN ORGANIZED AND RAPID MANNER

“Here we have worked in an organized and fast way”, said the President in an exchange with inhabitants of La Fe, one of the main towns of the special municipality, where the Government team arrived after midday this Sunday.

After touring several areas affected by Ida’s ravages, the President insisted that we cannot let ourselves be defeated by the weather conditions. That is why we also ask for your cooperation to restore in the shortest possible time, he stressed. “Now the hurricane we have to put it ourselves, with effort and will; that is what we are calling you to.”

As the coronavirus continues to be a challenge, even on the Isle of Youth, where the spread of the epidemic has been successfully contained, the First Secretary asked the Pineros to “continue taking care of yourselves, because, although you are the best territory in the country in confronting covid-19 and have maintained a rigorous control, you cannot neglect yourselves.”

In conversation with producers, the government team found that the main damages in this sector occurred in crops such as banana, pumpkin and pumpkin fruit. There was no loss of animals in the different farms, where only the roofs of the buildings were damaged. So far, said Mayor Adiel Morera Macias, 136 tons of recovered products had been sold to the population, including two tons of beans.

At midday on Sunday, some 9,700 customers remained without electricity service.

9,700 customers, especially in the areas of La Fe and La Demajagua, where 46 poles were down. According to estimates made in the municipality, by the end of the day between 90% and 95% of the service would be restored.

At the headquarters of Empresa Eléctrica, the President was informed of the reestablishment of more than 70% of the service in the special municipality. In the town of Gerona, 99% of the damage was restored and in La Fe, 79%. The Minister of Energy and Mines assured that the priority during the first hours was the service to the houses and the one that guarantees the water supply.

According to the Pinero Intendant, the greatest damage to housing is concentrated in light roofs, with partial damage to 141 properties. The work of the community factors in the popular councils will make it possible to count everything. 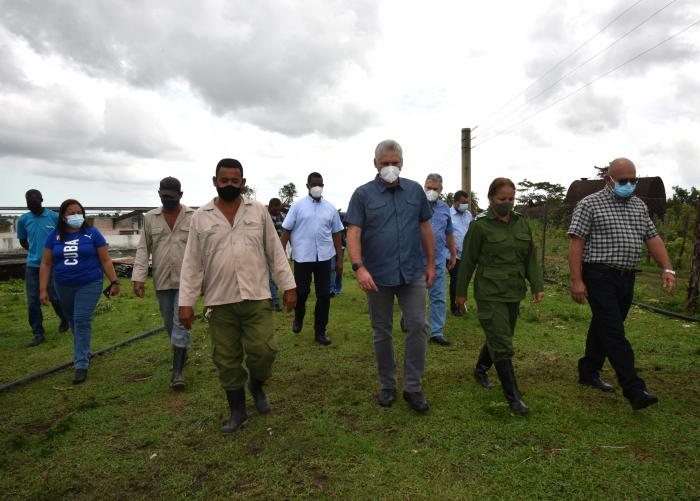 MUCH REMAINS TO BE DONE

The President, shortly before concluding the day on the Isle of Youth, commented on the characteristics that distinguished the weather phenomenon. The first of them, he said, is that it was an event that passed through the country in a very short time, therefore, the passage to each of the phases was very hasty, which demanded an additional effort from the leadership bodies for the confrontation. On the other hand, particularly in Pinar del Río, actions were taken with disaster reduction plans already updated by the pandemic.

These singularities demand more precision, coherence and effort. And both Pinar del Río and Isla de la Juventud, including Artemisa, which was also affected, responded quickly. “The main value is that there is no loss of human lives to be regretted”.

In view of the fundamental damages that occurred, especially those related to the distribution of electric energy, which were almost total in both territories, the President highlighted the agility with which they have worked to solve them.

Regarding what was appreciated in the two territories, he considered very important the actions for the collection of solid waste in the roads and communities. We have seen an atmosphere of willingness among the population to participate, he said.

These days were also full of teachings and lessons learned. In this sense, he gave as an example the way in which the damage caused to houses have been taken care of. It contrasts,” he said, “with that in recent years where we have been able to provide a faster recovery response, with the fact that the solution for people who have been waiting 12 years or more for a response and are living in temporary facilities, something very stressful for the life of a family, has been relegated to the back burner. This is an issue that we have to prioritize in the housing plans, even if we are a little late in the new buildings. These are things that we have to take care of and to which we have to give a different vision, he said.

With satisfaction, he highlighted what has been done in both territories, which prevented the consequences from being greater. There is still a lot of work to be done and, therefore, we must also put our hearts into dealing with the effects of the hurricane.

8 months ago Granma, Translations0
Decree-Law 35 and All Cubans' rightsBorder Opening Begins as of November 15