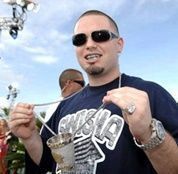 The Cuban people are, par excellence, cultured and simple, but there is a segment who practices ostentation, as a way of attracting attention. In manycases it manages to affect others.

The display of many jewels at the same time is reminiscent of street vendors who used to put them on their bodies for marketing purposes, which does not reflect good taste and is shocking to most people.

But the wearers of so much shininess will say that they like to show off the brilliance of the metals and it is still a childish truth.

There is another example of the financial capacity of the ostentatious, referring to audio equipment: the more powerful, the more expensive.

Owners of powerful devices go out on the street or place them in front of the window, not so much for the purpose of listening to the music but so that everyone [in the neighborhood] knows so much about their property that they cannot sleep, hear the television or talk at home.

Other demonstrations abound, such as the dogs, man’s best friend. Some make the noble animal the object of display, dogs that must be the most expensive to walk wearing a shiny chain too.

Boasting about one’s advantageous financial situation makes one think of the sentences of José Martí, in the letter he wrote to Maria Mantilla, from Cape Haitian on April 8, 1895.

“…Too much shop, not enough soul. He who has much inside needs little outside. Whoever has a lot on the outside has a little on the inside, and wants to hide what little… ” “.

“…it is a human duty to cause pleasure instead of sorrow, and he who knows beauty respects and cares for it in others and in himself. But he will not put a jasmine in a Chinese vase: he will put the jasmine, alone and light, in a crystal of clear water. That’s the real elegance: that the glass is just the flower.

In the face of so much showing off, one might wonder if these ostentatious people lost their ability to admire the flower, influenced by the consumer society, which was alien to the roots and idiosyncrasies of the Cuban people.