Home Of the Dream and the Nightmare

Of the Dream and the Nightmare

Of the Dream and the Nightmare 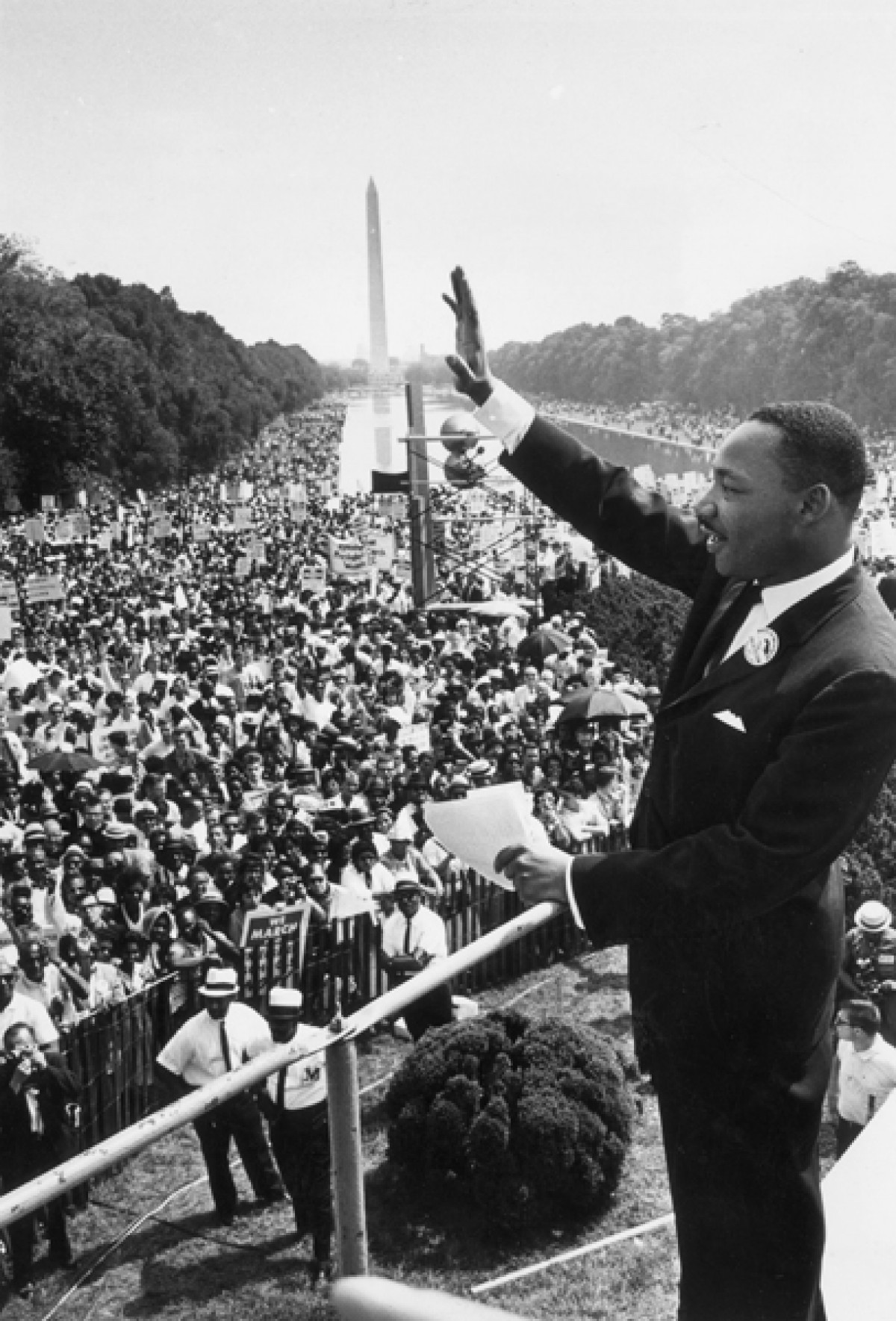 It was a blast, revalidating the struggle of many, raising the awareness of others and forming ranks in a social movement involving blacks and whites because it was for the civil rights of all. It also awakened those who were still lethargic after  hundreds of years of outrage and submission.

On August 28, 1963, the 100th anniversary of the Emancipation Proclamation for black people in the United States, the end of slavery, was observed when a crowd, led by the Rev. Martin Luther King and other leaders of the black people’s struggle and social and labor movements, marched on Washington and gathered at the National Mall at the foot of the imposing statue of Abraham Lincoln.

“I have a dream,” he said in his speech to what he called the greatest demonstration of freedom in the history of the nation, and he called out with utter crudeness that a century later “we must face the tragic fact that the black man is not yet free. He was chained by segregation and discrimination, “living on a lonely island of poverty in the midst of a vast ocean of material prosperity,” he was “an exile in his own land.

The dream? that the words of the Constitution and the Declaration of Independence will apply to each and every American as a guarantee of the inalienable rights to life, liberty and the pursuit of happiness. These were denied to “citizens of color” who had been given a bounced check from a bankrupt justice. But this marginalized, humiliated, separated people, who were denied every opportunity, even the most basic, knew of their right to open the doors of justice, to cast aside racial injustice and to build “the solid rock of brotherhood.”

The time was urgent, warned Martin Luther King, and also alerted his people and the rest of the United States: “1963 is not the end, but the beginning” (…) “There will be no rest or tranquility in America until the black man establishes his citizens’ rights. The winds of revolt will continue to shake the foundations of our nation until the bright day of justice emerges.

Three national television networks, for the first time, covered the march for jobs and freedom in together. The message reached the entire nation that a melting pot was being said, the pot that had mixed all the peoples who had come to its shores and built a powerful country, but that was one of the great lies. The Black ingredient, even the original peoples, the “red skins”, had been taken out of society. That media coverage was proof that it was time for change.

There Joan Baez and Bob Dylan sang, as did the gospel performer, Mahalia Jackson, who carried the feeling of the crowd with I’ve Been ‘Buked and I’ve Been Scorned. Many spoke, including Joachim Prinz, president of the American Jewish Congress, recalling his years as a rabbi in Berlin under Hitler, who said – according to The Guardian – that his great people, who had created a great civilization, had then become a nation of silent spectators to hatred, brutality and mass crimes and cried out: “America cannot become a nation of spectators. America must not remain silent.”

On August 28, 1963, and Martin Luther King’s “I have a dream” speech, a door was opened. It was hardly mentioned in the 64,000 pages of debate and congressional hearings that gave way to the Civil Rights Act of 1964 or the Voting Rights Act of 1965, which put on paper what it should be and yet was not; but it was a touch of the target.

Enemies took it into account. Cointelpro, the program of espionage and infiltration into the social movements of the time, made him its target. William Sullivan, the FBI’s assistant director of domestic intelligence, recommended: “We must mark him now, if we have not done so before, as the most dangerous black man in the future of the nation.”

Hot summers came and their street uprisings, many more marches and actions, unity with the anti-war movement, and rejection of the Vietnam War, which they also used as their favorite cannon fodder for blacks and Latinos. Martin Luther King was in that fight for all.

Little by little there were achievements, even a middle class of “coloured” men and women emerged, their numbers increased in universities, they became professionals, their faces already appeared as leading figures in Hollywood films, they showed, even more, their value in the sports world, where the image of a black fist is vivid as a symbol of Black Power, the power of black people.

Blood flowed – that of Martin Luther King himself in April 1968, that of Malcolm X, that of George Jackson, that of many others – Mumia Abu Jamal is still in prison and those who chose more radical methods of struggle are being persecuted. Other leaders in an ongoing struggle were highlighted, as the Lincoln Memorial speaker said as the summer of 1963 ended: it was only the beginning…

And 50 years later, what?
Present at the rally at the National Mall on Saturday, August 24, 2013, which brought together no less than 100,000 Americans of all colors, generations and ideologies to commemorate the 50th anniversary of Martin Luther King’s oratory piece, were the parents of Trayvon Martin. He was the 17-year-old boy shot dead in the chest by a white vigilante in Florida on February 26, 2012. It took protest marches in many American cities and a lot of work to have the perpetrator arrested and put on trial, and almost now, in July, a jury of five white women and a Latina declared him “Innocent.” Not a few posters in front of Lincoln’s statue again called for justice for what is perceived as a hate crime.

Police in New York and other U.S. cities are accused of practicing stopping and frisking bystanders, most of whom are black or Latino, and preferably young, for no reason. They are stopped because of racial profiling. African-Americans make up seven times more than whites among the prison population, which is already the highest in the world. In the United States, it is known and recognized that they invest more in prisons than in schools….

Only 21 percent of their youth reach high school or college, compared to 37 percent of whites. Budget cuts in major cities declared bankrupt and in federal spending itself, that of the entire nation, affect the public school system and, of course, scholarships or university credits. It goes without saying that communities and neighborhoods where poor or low-income minorities live are among the hardest hit by teacher layoffs. During Barack Obama’s tenure alone, more than 300,000 school jobs have been lost – with a high proportion of these being African-American teachers and staff. Public education will be of even poorer quality, which means that there is no future sown there.

The unemployment rate in 2012 was 13.6 percent for the African-American work force, while the white unemployed made up 8.1 percent. Of the 45 million Americans who receive food aid because they are poor, more than 25 percent are black.

Barack Obama, the first black president of the United States will speak today, August 28, in honor of Martin Luther King.  But it is well-known that the president is only an image in a House that is still white and protective of the interests of the powerful 1% against the 99% who – without distinction of race – have declared themselves in struggle and have also begun a path to close the gaps of class inequality, as the Occupy [Wall Street movement] which has been marginalized.

Now, in the southern states, even in other regions, electoral districts are being reconfigured and the black population is once again segregated from the vote, even having to pay to register. It also is the population with the lowest income, thereby discouraging voting. There is only one black senator among the top 100 in Congress, and 43 representatives in the House of Representatives, among 435…

Therefore, the validity of the thought of the civil and pacifist leader: “I have a dream: that one day this nation will rise up and live the true meaning of its creed. We hold this truth to be self-evident: All men are created equal.

Martin Luther King will continue: “Even though we face difficulties today and tomorrow, I still have a dream.”