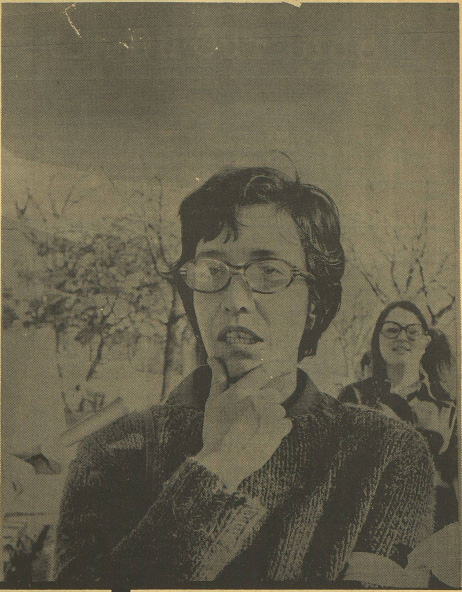 By printing this interview, The Rag does not mean to take sides in the upcoming election. But we would like to point out that almost any change would be an improvement.

The interview was taped on the spur of the moment at the Abortion Conference, where the Socialist candidates were promising to work for free abortions on demand if elected. The candidate’s willingness to speak into a somewhat hostile reporter’s tape recorder without advance notice was remarkable in the context of Texas politics.

RAGT: How do you propose to change the abortion laws from the City Council?

MH: Well, what we intend to do first of all is help build the Women’s Liberation movement. We will involve ourselves in all the building aspects of it and in that way involve a larger number of people. What we will do at the City| Council is also have it at a time when more women are able to come to meetings and express their views as to what the City Council ought to be| doing. That is, we won’t have them at 9 o’clock in the morning when most people can’t come. There are working women who can’t present their views because they’re working… RAG: Wouldn’t you say that most men can’t participate at that time either, so it’s a bit unfair to all citizens?

MH: That’s true. So we would have it at a time when all citizens could participate.

RAG: How do you see. your chances for winning?

MH: Well, what we see is that if we get the publicity, if we get out and are able to take our demands to the people, they’re going to support us. That’s our chances.

Many women support free abortion on demand, which is one of our positions. Large numbers of people support our anti-war position. But there are areas of the city that just have not had the opportunity to hear us.

RAG: How has the response to you been from the straight media?

MH: All of the press except for the Daily T ex an -were at our press conference. Even the Dallas Morning News was there! And, in fact, they didn’t seem to be that hostile just amazed that Socialists would run. Their major question was: “Is it serious?” The way this was answered over and over again by all the candidates was yes, we are serious, we are the only group of people running today who are serious, who are even talking about the major issues that affect people. The others are avoiding them.

RAG: Speaking of talking about the major issues, would you consider a debate with the incumbents?

MH: Yes, I would. Of course. I would certainly like to debate the mayor, Travis LaRue. We’d discuss things like pollution around laundries. We’d discuss his position on Women’s Liberation, although there’s supposed to be a Mayor’s Commission on Women. We would debate the question of the right of a citizen to march down the street and assemble.

We would discuss many issues. Like, for instance, the fact that he gives the key to the city to all sorts of people people who sell Budweiser on TV, and things like that but he would never consider the idea of inviting representatives from East Austin, say, to be mayor for a day. Not only mayor for a day, but just come in

RAG: Do you agree with what seems to be a wide-spread sentiment in East Austin that the apathy of City Government has emasculated the Human Rights Commission?

MH: I would agree with that. The reason that it was actually started in the first place was, basically, to make people believe that the City Council was going to do something.

A real, concrete example of what they haven’t done that they could have done is in the recent demands being made by the Booker T. Washington Project people. They are saying that there has been brutality, that the police come in as outsiders, they push us. around, they have guns on us, and we don’t appreciate this. The people were trying to get something done about the situation.

Of course, there have been promises of investigations. It doesn’t take more than 30 minutes to go out there and investigate that situation.

RAG: Do you believe that even if you lose, your candidacy may push whoever does win towards solving these problems?

* In this way, we will pressure them to talk and make their stand known to the people. And this is where the media has to come in and support us. That’s our basic fight at this point letting people know what we stand for.