Home Malicious Interests Against Cuba in the USA

Malicious Interests Against Cuba in the USA

No study provides scientific evidence that there were radiofrequency waves of high intensity in areas where diplomats were located, stresses Johana Tablada, deputy director-general of the U.S. Directorate of the Cuban Foreign Ministry (MINREX). 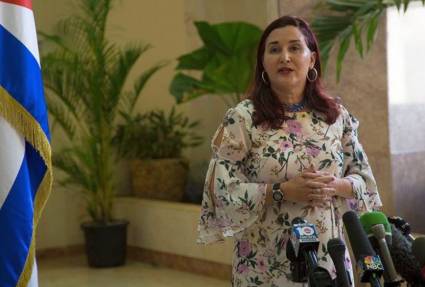 Tablada said that the group of experts from Cuba that investigated this issue explained why the thesis put forward most recently is an unlikely hypothesis Author: MINREX Published: 12/05/2021 | 08:49 am

Malicious interests are behind the campaign on the alleged Havana Syndrome, Johana Tablada, deputy director-general of the U.S. Directorate of the Cuban Foreign Ministry denounced today.

No report or study published in the United States, Cuba or the world provides scientific evidence that there were radiofrequency waves of great intensity in the area where the diplomats who reported health symptoms were located, said the official of the Ministry of Foreign Affairs (MINREX).

The only ones who won with this story are the members of a minority and reactionary group of politicians desperate and willing to resort to any means to try to impose and perpetuate the course of confrontation, lies and injustice in Washington’s policy against the Cuban people and the Americans themselves, she said.

Tablada maintained that the group of experts from Cuba that investigated this issue stated and explained why the thesis exposed most recently is an unlikely hypothesis, and certainly not a proven fact as the media and unidentified sources try to fix in people’s imagination.

She added that the Cuban Academy of Sciences disagreed on this possibility which she described as speculation presented as one more hypothesis, not supported by arguments in the body of the published report of the U.S. Academies of Sciences. The Americans themselves cannot assure what is the cause of the reported symptoms and the absence of information requested to the Washington government is critical, which limited their study.

The diplomat reiterated that the Academy of Sciences and the team of Cuban experts reject the politicization of the issue and recently reiterated the call for collaboration between both countries to solve the matter and establish the truth.

Tablada stressed that up to now the most concrete and factual thing we have seen is that symptoms were reported with such a diversity that even the State Department doctors explained, as well as the Cuban scientists, that so many elements cannot be attributed to a common cause.

The official recalled that the unfounded accusation against her country of the attacks served as a pretext for the withdrawal of most of the staff of the United States Embassy in Havana, in 2017, coupled with an unprecedented sequence of actions of hostility and setbacks in relations between the two countries and peoples.

She said that after the change of administration in the White House we are facing a new cycle of articles and leaks on the alleged existence of attacks, a word not used by official spokespersons of the Washington government in their most recent statements, according to PL. She pointed out that the common denominator of this set of publications is political speculation, manipulation and absence of primary sources and the misleading reference that assumes and presents as a true fact an alleged syndrome that was not proven by science.

The Deputy Director-General of the US Directorate of MINREX pointed out that there is no such thing as the Havana Syndrome outside of propaganda, but we live in a world, she stressed, in which perceptions matter more than realities.

She said that the investigations of the Federal Bureau of Investigation (FBI) and the Ministry of the Interior (Minint) of Cuba were serious and conclusive in ruling out the existence of ultrasonic or infrasonic sonic attacks.

Tablada stressed that Cuba has not questioned the existence of health symptoms, has investigated the issue from the police, medical and scientific spheres and has made many attempts and calls to cooperate by delivering information of its investigations to the U.S. government.

The diplomat concluded that the main victim of this whole saga seems to be again the truth. The measures taken on the basis of unconfirmed speculation have not been reversed and the suffering they have caused to the Cuban people, families and bilateral and people-to-people relations has only been aggravated, she said.

Recently, White House Press Secretary Jen Psaki said that agencies and departments across the federal government are working to address “unexplained health incidents” that are sometimes reported by different agencies and did not occur in one place.

Marco Rubio, of the Senate Foreign Relations Committee, insist on the so-called Havana Syndrome despite Cuba’s denial, supported by scientific studies, which categorically distances itself from such actions.

1 year ago Juventud Rebelde"sonic attacks", MINREX0
The CIA and hatred in the social networksNo Democracy Without Sovereignty