From the blog of Cuban photographer Juvenal Balán. 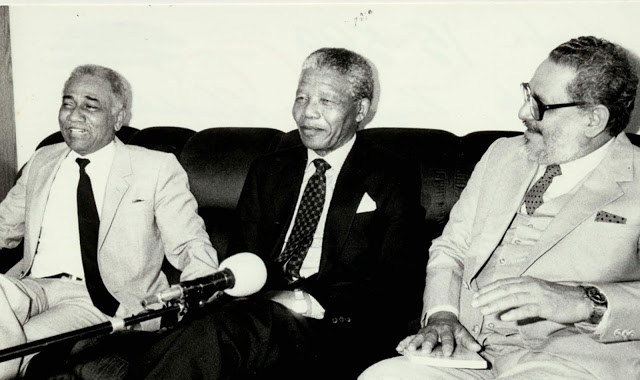 The prisoner with the number 46664 and the first black president of South Africa, who spent most of those 27 years confined in a damp cell barely 2.4 metres high by 2.1 metres wide, who showed gallantry and who was not, nor could anyone break his fighting spirit that led him to become the world’s oldest political captive and an icon of the universal struggle against the hated apartheid segregationist regime that existed in his country, would now be 100 years old.

A man of universal stature who is remembered today by all because, as Fidel said in a reflection following his death: “No present or past event that I remember or have heard of, such as Mandela’s death, had such an impact on world public opinion, not because of his wealth, but because of the human quality and nobility of his feelings and ideas”.

Granma’s photojournalists had the good fortune and joy of immortalizing him with their photos. Arnaldo Santos while attending the inauguration of the new government in Namibia on March 24, 1990, where Nelson Mandela exchanged with the Cuban delegation led by Revolution Commander Juan Almeida Bosque and Jorge Risquet Valdés.

Then Liborio Noval when Mandela first visited Cuba — a year after his release from prison, met Fidel Castro personally and began a close friendship — and was present at the July 26, 1991 ceremony in Matanzas, where Fidel was decorated with the José Martí Order. It was an intimate friendship sealed in the common struggle, and it remained undisturbed, for the admiration between the two was mutual.

Fidel visited South Africa again in September 1998 – the first time was in 1994 – and I had the opportunity to immortalize these two greats of history who treated each other like brothers.

Fidel said about Mandela: “Old and prestigious friend, how pleased I am to see you converted and recognized by all the political institutions of the world as a symbol of freedom, justice and human dignity.

Mandela, on Fidel’s first visit to his homeland, said: “I am a loyal man and I will never forget that in the darkest moments of our homeland, in the struggle against apartheid, Fidel Castro was at our side.

And this relationship between the two great men, both symbols of the moral strength of principles and dignity, lasted until Mandela’s death on 5 December 2013 at the age of 95.