In an era marked by virtual affections, not very credible for the most part, the scourge of the coronavirus has put in greater trouble that which the French call poutous, bisouilles, becs, bisous, bécots… 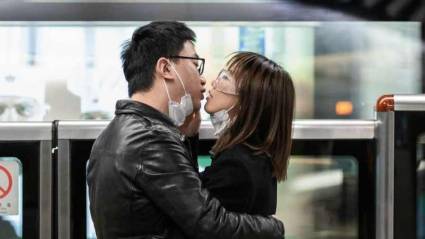 This picture of a Chinese couple pulling down their masks to kiss has been very popular, in the midst of the spread of the virus. Author: EFE Published: 15/03/2020 | 12:04 pm

Amazed, the world put its hand on its mouth when, a few days ago, French President Emmanuel Macron and his wife Brigitte received the king of Spain at the Elysée Palace without giving them a hand or a gift – bonjour with bonjour and cheek with cheek – the bise, that double portion of kisses so dear to the so-called land of love. The host couple chose to bow slightly with their hands and throw love into the air to Doña Leticia.

The anecdote may encapsulate the evolution of a planetary medical history because, just a week ago in Naples, Macron himself had had no qualms about putting a pair of pecks on the face of Italian Prime Minister Antonio Conte, a gesture with which, it is said, at the same time, sent a message of security to their citizens in times of uncertainty.

In an era marked by virtual affections, most of which are not very credible, the scourge of the coronavirus has put in a greater predicament what the French call poutous, bisouilles, becs, bisous, bécots… in short, kisses. There and here, certain contexts of doubt, between acceptance and rejection, leave many attempts in the frustration of the grimace.

A powerful and highly respectable woman, none other than Germany’s Federal Chancellor Angela Merkel went through the motions this week of being denied her hand by her own Interior Minister at a meeting, while across the Channel Queen Elizabeth II wore long white gloves for the first time in a ceremony at Buckingham Palace.

The issue is global, but in France, where the kiss is something of a national attribute, it must hurt more. It is easy to imagine that the Minister of Health, Olivier Véran, the public call to stop kissing must have seemed almost like a dictatorial act.

Such is the colorfulness of this practice that the French themselves sometimes don’t know if it’s right to give two kisses, as they do in Nice and Paris, or three and even four, as they’re used to in Montpellier. Who would have seen a Cuban there, with a shopping bag!

The famous Parisian centers of joyful life have also been impacted. At the Mask Club, for example, you cannot get into the bedroom without using hydroalcoholic gel and wearing a convenient mask, either expensive lace or the common surgical version.

Even the Tinder dating application, with some 50 million users who often venture into real contact, had to put on the mask on and warn its customers that “protecting yourself from the coronavirus is more important”.

They are distant prints that give the idea of how human contact looks in this particular context of humanity. German experts advise suspending the strong handshake that, from the schools, has always been promoted as a sign of strong personality. The British and Italians also propose to leave aside those expressions of appreciation that so many earthlings germinate, generous, by the hands and the lips.

There is indeed a moratorium on kissing. In Beijing, red posters advise against squeezing and propose to replace them with the traditional gong shou; that is, to put the palm on one’s fist as a sign of aseptic “hello!

Ravaged by the coronavirus, in Iran they defend the motto “I do not shake your hand because I love you” and men choose to approach, without reaching the contact, a closed fist to the equally tight fist of the friend. And almost at the end of the world, in New Zealand, the practitioners left aside the hongi, the traditional Maori greeting that consists of joining noses and fronts.

In Cuba… in Cuba you can see everything. Just a couple of days ago, at an event of colleagues, I found myself in the same space with some who kept me at a distance, at the distance of a musketeer, and others who embraced me, in a frank bid for the “affectovirus”. As far as the Ministry of Public Health is concerned, which is everyone’s best friend, each personal picture is an interesting page.

There is no other way than to join in this battle that is also being fought for the massive return of kisses. The world cannot live without them, so, as the measures are temporary, it is advisable to make a stockpile for when the “thing” is fixed. Let’s hope that by July 6th, International Kissing Day, the epidemic will be a tamed jíbaro and, without a virus crown or a king’s crown, the common people of humanity will take to the streets to celebrate… simply by kissing.