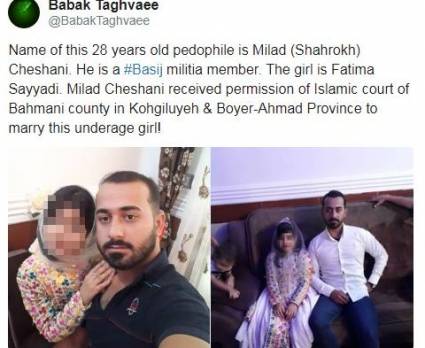 Iranian authorities have demanded that an Islamic court in Bahmai County, Kohkiluyeh Province and Buyer Ahmad annul the marriage between a 28-year-old man and a 9-year-old girl, journalist Babak Taghvaee reported on his Twitter account.

This decision was taken under public pressure after the wedding images went viral on social networks, RT says.

The wedding video was made public by the journalist and women’s rights defender in Iran, Masih Alinejad.

This is a wedding party for a girl under 13 years old. I cried when I received this video … According to Islamic laws, a girl […] can get married but can’t choose her own dress, the activist said on her Twitter account when she posted the video.

Under Iranian law, a girl can get married after the age of 13, and a boy from the age of 15.

According to 2015 data, every seven seconds a girl under 15 gets married somewhere in the world, according to the NGO Save the Children. Meanwhile, India is the country with the highest rate of underage wives, according to statistics from the same year, more than 24.5 million marry before they turn 18.

2 years ago Juventud Rebelde, TranslationsWomen0
US DSA in Solidarity with CubaJohn Bolton Has Fallen