Home “I ask the world to do something for us”.

“I ask the world to do something for us”.

“I ask the world to do something for us.” 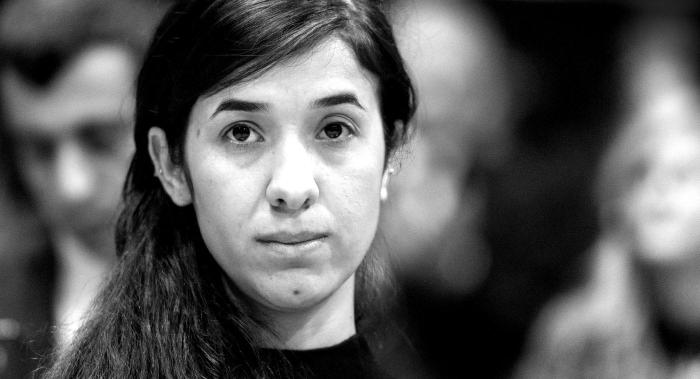 Murad tries to make the world aware of what’s going on with his people. Photo: Patrick Seeger/EPA

“My pain is like a hundred deaths. I sadly sentenced a 14-year-old girl to BBC MUNDO, after living such a traumatic experience as being a sex slave.

My words do not find the way to express in prose so much pain. Her phrase, however, reminds me that her story is multiplied into others, to the shame of humanity.

Nadia Murad won the Nobel Peace Prize 2018 and understands very well the sorrow of this young woman. The recognition is undoubtedly an honor, but this woman bears the cross of having been a sexual slave of the terrorist group Islamic State (IS). Since then, her struggle has not ceased, and she travels the world as an activist against the rape of women in contexts of war.

When collecting the award I remembered that “thousands of women are still imprisoned in the hands of IS mercenaries.” For this reason, “my survival is based on defending the rights of persecuted communities and victims of sexual violence. One prize and one person cannot do it. We need an international response,” she told the Spanish daily El País.

Murad is part of Yazidism, a minority religion that dates back to 2000 B.C. and has its origins in the teachings of Iranian prophet and reformer Zoroastro.

This group within Iraq has been persecuted and its members forced to convert to Islam, or die at the hands of terrorists.

It was from the year 2014, when the Islamic State began the extermination against the Yazidis and Shiites, using all kinds of vexations against them.

The beginning of the end

Nadia’s nightmare began on a normal day, in that place she called home, when IS terrorists came to her village in Iraq and killed most of the men while women under the age of 45 were kidnapped, she confessed to the BBC.

Murad suffered the same fate as almost all of these young women. They were already in the hands of the terrorists and at night the sale of the girls began among the IS terrorists, most of them to be sexually enslaved. This inhumane practice is part of the propaganda to attract more followers to the organization.

“They began to walk around the room, looking at us, while we shouted and asked for compassion. They surrounded the prettiest girls and asked them: “How old are you? They looked at their mouths and their hair. They are all virgins, aren’t they? they asked the guard, who nodded and said, “Of course, like a merchant proud of his products,” Murad recalls sadly for El Diario.

After living hard experiences, she managed to flee from her captors and began a fight without rest, at the risk of her own safety.

This battle, as she repeats in each of her speeches, will not cease until the creation of a specialized tribunal to try those responsible for the crimes committed by terrorists in Syria and Iraq.

Your mission: the freedom of a people

Murad tries to make the world aware of what’s going on with her people. She tells her story over and over again. She does everything she can because her experience is not lived by another adolescent or girl, neither in Iraq nor anywhere else in the world.

The self-proclaimed Islamic State has destroyed the lives of some 3,000 Yazidi girls and women, according to El País newspaper. Raped, locked up and sold as simple objects, they try to recover their souls when they manage to escape from their kidnappers.

I will be the last. The history of my captivity and my struggle against the Islamic State is a book written by Murad as a testimony of her experiences. In this way, she aims to reach a wider audience and raise awareness.

She has travelled to different countries in order to meet with the leaders of those nations. However, the response has not been as expected and, while world leaders make a decision, there are still girls and women being kidnapped.

Nadia has urged the international community to “work together with the determination to show that genocidal campaigns will not only fail, but will also hold perpetrators accountable and that there will also be justice for survivors.

But the world becomes blind to these problems. Perhaps this is because there are others that are considered “more important,” such as economic crises or political conflicts between great world powers. Meanwhile, wars, violence and the pains they cause continue waiting for a common effort, for human sensitivity, so that stories like those of Nadia and the thousands of girls turned into sexual slaves are not repeated and we never have to listen again: “I ask the world to do something for us”.

3 years ago GranmaRape, Women9
Trump Could Bring Down the US EmpireThe challenge of assuming a new concept