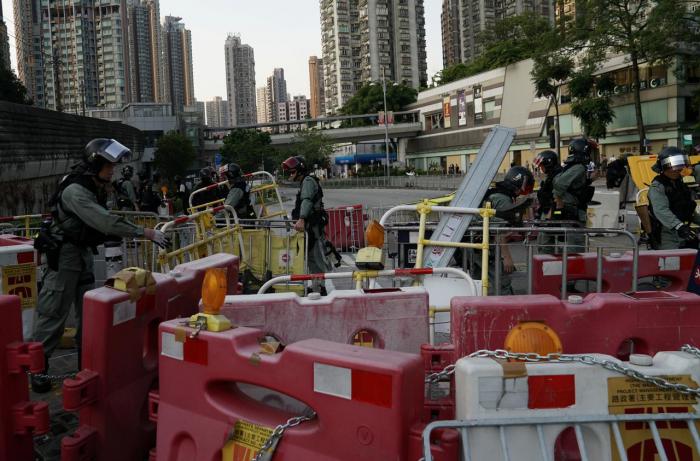 Hong Kong police fired tear gas Saturday to disperse protests after pro-Beijing groups destroyed some of the “Lennon Walls” of anti-government messages in the city ruled by China after more than three months of unrest.

The gases were fired when protesters threw Molotov cocktails into a police cordon in the new city of Tuen Mun in the western New Territories and near Yuen Long during the night.

Some demonstrators in Tuen Mun set fire to a Chinese flag while others knocked down wooden and metal fences and traffic bollards to block roads, at least one was set on fire.

Some destroyed equipment at the tram station, unearthed bricks and collected stones from the margins of the tracks. Others used police fire extinguishers.

“Radical protesters also threw Molotov cocktails, posing a serious threat to the safety of police and others.

Hundreds of protesters strayed from the police cordon when tear gas was fired, many of them running down the highway to regroup.

Dozens of Beijing sympathizers had already knocked down some of the large colorful mosaics made with Post-it notes calling for democracy and denouncing the perception of Chinese interference in the former British colony, which returned to Chinese domination in 1997.

The “Lennon Walls” have flourished through the Asian financial center, in bus stops and shopping centers, under walkways, along pedestrian walkways and in universities.

Protests in Hong Kong intensified in June over legislation, now withdrawn, that would have allowed people to be sent to mainland China for trial. Since then, the demands have been extended to demands for universal suffrage.

3 years ago Granma, TranslationsChina0
Motives for Emigration to the USUnited States, Ready for Socialism