What was Ho Chi Minh’s Greatest Wish
for His Party and His People? 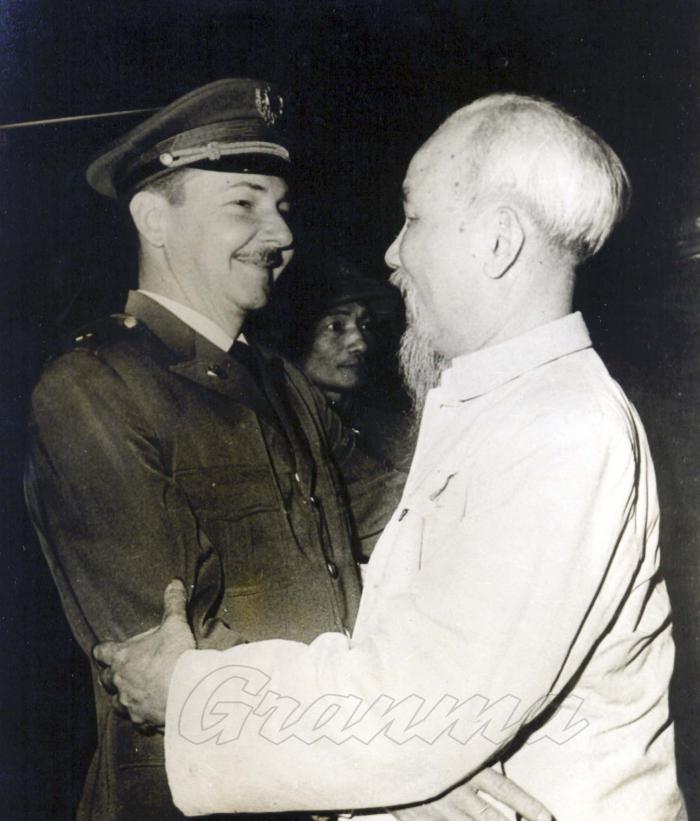 Army General Raul Castro was able to embrace Ho Chi Minh during his visit to Vietnam in 1966. Photo: Granma Archive

Although the struggle of our people against US aggression, for national salvation, must face more difficulties and sacrifices, we are determined to obtain total victory. That is for sure.

I intend, when that happens, to travel both North and South to congratulate our heroic peasants, military cadres and combatants, and to visit the elderly and our beloved children and youth. Then, on behalf of our people, I will go to the fraternal countries of the socialist camp and friendly countries all over the world, to thank them for their heartfelt support and the help they gave to the patriotic struggle of our people against U.S. aggression.

Tu Fu, the famous poet of the Tang period in China, wrote: “In all eras, few are those who reach seventy years of age. This year, since I am seventy-nine, I can count myself among those “few”; however, my mind remains perfectly lucid, although my health has declined a little compared to the last few years.

When one has seen more than seventy springs, health deteriorates with age. But who can say how much longer I will be able to serve the revolution, the Fatherland and the people? Therefore, I leave these lines in anticipation of the day when I must meet with Karl Marx, V.I. Lenin and other revolutionary leaders; in this way, our people throughout the country, our comrades in the Party, and our friends in the world will not be taken by surprise.

First I will talk about the Party: Thanks to its close unity and total dedication to the working class, the people and the Fatherland, our Party has been able, since its foundation, to unite, organize and lead our people from success to success in a firm struggle.

Unity is an extremely precious tradition of our Party and the people. All comrades, from the Central Committee to the cells, must preserve the unity and union of thought in the Party as the apple of their eye.

Within the Party, establishing a broad democracy and practicing self-criticism and criticism regularly and seriously is the best way to consolidate and develop solidarity and unity. Affection and comradeship must prevail.

Ours is a party in power. Every Party member, every cadre, must be deeply imbued with revolutionary morality, and demonstrate industriousness, frugality, integrity, probity, total dedication to the public interest and complete altruism. Our Party must preserve absolute purity and prove itself worthy of its role as the leader and loyal servant of the people.

The members of the Young Workers League and our youth, in general, are good; they are always ready to offer themselves, without fear of difficulties, eager for progress. The Party must promote their revolutionary virtues and train them to be our successors, both “red” and “expert”, in the construction of socialism.

The training and education of future generations of revolutionaries is of great importance and necessity. Our workers, on the plains and in the mountains, from generation to generation, have resisted hardship, feudal and colonial oppression and exploitation; they have also experienced many years of war. But our people have shown great heroism, courage, enthusiasm, and industry. They have always followed the Party since it saw the light, with unconditional loyalty.

The Party must carry out effective plans for economic and cultural development, in order to constantly improve the lives of our people. The war of resistance against U.S. aggression can be prolonged.

In spite of the difficulties and setbacks, our people are certain that they will obtain total victory. The U.S. imperialists will certainly have to resign. Our Homeland will certainly be unified. Our compatriots in the South and in the North will certainly be reunited under the same sky. We, who are a small nation, will have won the honorable medal of having defeated, through heroic struggle, two great imperialisms – French and American – and of having made a valuable contribution to the world national liberation movement.

With regard to the world communist movement: As a man who has devoted his whole life to revolution, I feel more proud of the growth of international communism and workers’ movements, and I feel more hurt by the current discord between the brother parties.

I hope that our Party will do its best to contribute effectively to the restoration of unity among the Brother Parties on the basis of Marxism-Leninism and proletarian internationalism, in a way that suits both reason and feeling. I strongly trust that the brother Parties and countries will have to unite again.

Regarding personal affairs: all my life I have served my country, the revolution and the people with all my strength and with all my heart. If I must now depart from this world, I have nothing to regret except not being able to serve more and better. When I am gone, an onerous funeral should be avoided, so as not to waste the time and money of the people.

My greatest wish is that our Party and our people, uniting their efforts closely, will build a peaceful, reunified, independent, democratic and prosperous Vietnam, and that they will make a valuable contribution to the world revolution.

3 years ago Granma, TranslationsVietnam0
Those who returned"In Cuba We Needed Trotsky"