Home Helms-Burton: A Silenced Story (I)

By: Ricardo Alarcón de Quesada
Ph.D in Philosophy and Literature, writer and Cuban politician. He was Ambassador to the UN and Cuban Foreign Minister. Presided over the National Assembly of People’s Power of Cuba (Parliament) for 20 years.
April 13, 2019 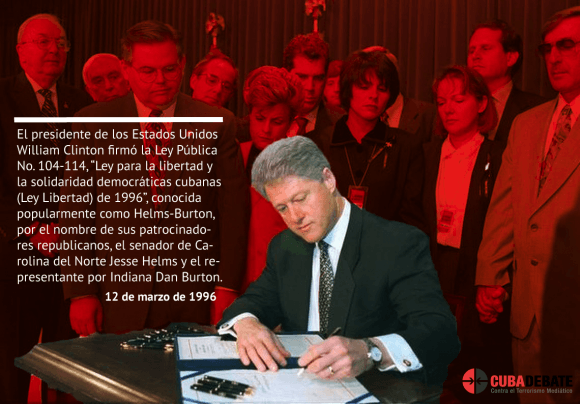 Since the beginning of this year, the U.S. State Department has issued several announcements about the partial suspension of the application of some aspects of a chapter of the so-called Helms-Burton Act. It has done so in the deceitful, fraudulent style characteristic of the current rulers. Its clear intention is to create uncertainty and confusion, a purpose for which they have, as usual, the means that are supposed to be used for informing the public.

Above all, it must be said rigorously said that this is a secondary aspect of the Helms-Burton Law, a pseudo-juridical  contraption that grossly violates International Law, whose illegality and aggressiveness does not change a bit whether or not the so-vaunted suspension is applied. It is a question of opening or not, now, the possibility of presenting lawsuits before North American courts for acts carried out outside their jurisdiction, in this case in the territory of the Republic of Cuba. Since such litigation could affect foreign companies with investments in the Island, the matter provoked rejection by other countries. It also led the European Union to present a formal complaint to the World Trade Organization in 1996. The matter was then sealed when Washington undertook to suspend the action before its courts, which Clinton, W. Bush, Obama, and even Trump, have consistently done every six months.

This was an exercise repeated for more than twenty years until, on January 16, [2019] it was announced that this time the suspension would be for only 45 days. When the deadline expired in March, they made it known that they would extend it for another 30 days, adding that, as of the 19th of that month, they would allow the filing of lawsuits before their courts against some 200 Cuban companies arbitrarily included in a list drawn up by Washington. Again, in April, they extended the deadline by two weeks, until May 1st, maintaining the exception against Cuban entities.

Already in 1996, Fidel Castro had anticipated that the suspension clause was a “hoax”. Since last January, twenty-three years later, Mr. Pompeo appears, in a doubtful pose, “shedding the daisy”, mocking everyone, especially his European allies, turning the commitment made to them into wet paper.

This game serves, above all, to divert attention from what is fundamental, to what is barely spoken of, and to what I would like to refer to, trusting in the benevolence of the readers of Por Esto!

The Helms-Burton Act has four Chapters or Titles. The first turns into Law, all the measures, which until then were executive decisions, that shape the economic, commercial and financial blockade imposed on Cuba, widens it, and tries to extend it all over the planet. The infamous policy, thus codified, could only be eliminated by a decision of both Houses of the U.S. Congress.

The Second describes, with a certain level of detail, what would happen with the hypothetical defeat of the Cuban Revolution as a consequence of the economic war. There would then be what they call a “transition period” during which all the institutions of Cuban society would be dismantled and the country would be under total U.S. domination. So that no one can doubt it, the process would be led by a U.S. official appointed by the President of the United States, whom the law discreetly calls Cuba Transition Coordinator. This true proconsul was actually appointed by W. Bush, although he never fulfilled his mandate on the island. He had to devote himself to promoting, outside Cuba, the Transition Plan that Bush, in compliance with the law, presented to Congress in 2004 and in an expanded version in 2006 and that no one has repealed.

Throughout Title II, there is a redundant insistence on the concept that for the elimination of the blockade and future relations with a supposed post-revolutionary Cuba, an indispensable condition will be the return of their properties to those who lost them on January 1, 1959 (to this subject I will have to return later).

So far, with Title I and Title II, Helms-Burton is a text that tramples on International Law from beginning to end. Its extra-territorial character is more than obvious since the Cuban archipelago is not part of the territory under Washington’s jurisdiction.

In addition to the above, Helms-Burton added a Title III that establishes the possibility of bringing legal actions before U.S. courts against companies or individuals who use, in any way, properties claimed by those who allegedly owned or inherited them. This Title includes an article that allows the US President to suspend the commencement of such actions for half-yearly periods, to which I devoted the initial part of this essay.

Finally, Title IV, which has already been applied on several occasions, denies visas to enter the United States to businesspeople and their families who use properties that are the subject of a lawsuit.

The Helms-Burton Act reminds us of the warning Carlos Manuel de Céspedes gave us very early on. The Father of the Cuban Homeland, in 1870, discovered that the “secret” of U.S. policy was to “seize Cuba.” Thanks to Helms and Burton, the designs of the Empire appear in the light of day. That they can make them a reality is, of course, something quite different. From Céspedes to Fidel, Cubans have shown that they will fight to the end and that they will never be anyone’s slaves again.

3 years ago CubaDebate, Translationsblockade, Helms-Burton0
"We Speak for Those Who Can't Speak" Assange, Between Gratitude and Betrayal