Gerardo and René on “Red Avispa”

Ana Álvarez Guerrero,
Student of Journalism of the Faculty of Communication of the University of Havana. On Twitter: @aaguerrero97 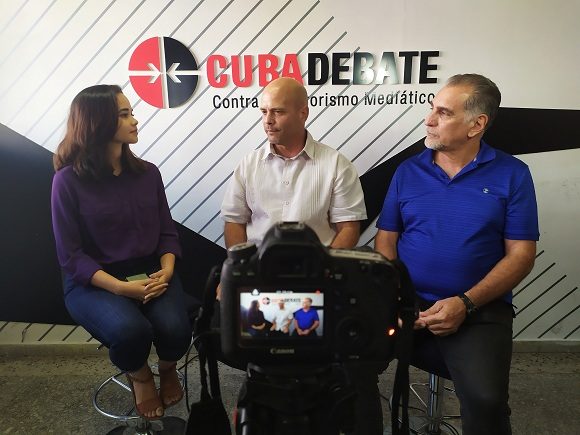 Heroes of the Republic of Cuba, Gerardo Hernandez and René Gonzalez, spoke today with Cubadebate about the Cuban premiere of the film “Red Avispa” at the 41st New Latin American Film Festival.

What did you both think of the film directed by French director Olivier Assayas?

The answer to this question and their impressions of this film – one of the most controversial of this edition of the Festival – were shared by Gerardo and René this afternoon, in an exchange that was transmitted through Cubadebate’s Facebook page.

Some of Gerardo and René’s impressions of the film

The film, as many people have said, is not exactly the story of the Five, it is the story of part of the Five, but it also goes beyond that to the story of the confrontation between Cuba and the United States. It seems important to me that from the point of view of a European, who has no direct relationship with this conflict of so many years, a film has been made on a subject that, during the time in which this story unfolded, was a subject censored by the media of the world. That is the fundamental value of the film. I know that it will generate debate in the Cuban public, because it is the most difficult audience for a film like this. This is because it knows the case, it lived it. If the film gets a rating of 50 points from Cuban viewers, it’s a good film.

What I liked most about the film was the boldness of placing the subject of terrorism in Hollywood. It is known that in Miami they have threatened to burn cinemas that show it. I think it’s brave to make a film that, without being pro-Cuban, embraces the truth and this truth favors us because we’ve been the victims for more than half a century.

The film shows 50 years of aggression, terrorism, crimes against Cuba. They are not so afraid of the film as they are of the story, a story that if they could have told it they would have done it, they have money, connections. This was a trial in which the 12 members of the jury, when they left the courtroom, took an oath of silence, did not dare to speak. In another case, each one of those 12 members would have made his book of when he was a juror in the case of the 5.

This case filled the judicial system, the judge, the jury, the prosecutors with shame, that’s why it’s a story that they can’t tell and that they’re afraid of, and that for so long they hid and tried to let nobody know. They are afraid that the history of U.S. aggression against Cuba, for so many years, will be known.

Expect an expanded summary of Gerardo and René’s statements to Cubadebate.

In video, Gerardo and René talk about “Red Avispa”.