Weeding Out the Wrongs:
The Titanic Mission Awaiting Alberto Fernández 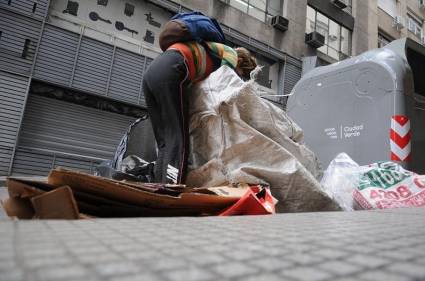 A decision announced a priori brings about the purposes Alberto Fernandez has in his portfolio for when he is sworn in as president. Within two days: Argentina is not going to accept the last pull of the scandalous $56 billion that Mauricio Macri sought from the IMF, It has been the largest loan granted by that institution in all its history. Nor will it negotiate more loans.

His will be a term that will be born under that Sword of Damocles, because the strong indebtedness agreed by Macri will still continue to hover over the country for some time. But Fernández will not allow the overruns with which the Fund manages the Governments to overfly it. No more recipes.

Fernandez won’t do it. In the weeks since his election, he has reiterated the same idea: the country will not pay until the economy reactivates and grows.

With this conviction, he faced his first dialogue with the new head of the IMF, Kristalina Georgieva. She asked him, a few days ago, to apply policies of “fiscal viability” that allow the nation to pay off the debts contracted by the outgoing president.

The president-elect remained at “his 13” [stuck to his guns]. His administration, Fernández replied, will propose “a sustainable economic plan” and there will be no more fiscal “adjustments.”

However, Argentina has no choice but to pay, probably through renegotiation.

The new government – he has also reiterated this – will not declare Argentina in default (cessation of payments). This would mean that all credit and investor doors would be closed and, in addition, there are commitments made with private debt holders. But the incoming executive also refuses to tighten people’s belts just to favor, as Mauricio Macri has done until today, the eternal circle of indebtedness.

The situation seems unusual in its difficulty, although it is not new. It resembles too much that of Argentina in 2003, when the late former president Néstor Kirchner took over the helm of an equally indebted country. Perhaps then with more factories closed and more hunger, and the nation was the prey of a boiling up that brought the beaten middle class to the streets, put pot-banking in vogue, and pushed a president, Fernando de la Rúa, out of the Casa Rosada. Then, at the climax of the impossibility of maneuvering, the government was forced to freeze the money of savers in the banks and decreed the so-called “corralito financiero” (financial corral).

Those spontaneous mobilizations were the result of several administrations as rabidly and ruthlessly neo-liberal as the one Macri is now concluding. He has also been repudiated in the streets by those who come back from the same evils, and even by those who did not experience them before but suffer them now.

Somehow, Macri has also been taken out of the house of government by the people, only “for the better”. The electoral outcome that gave victory to the Front for All is due, in good measure, to its ability to unite its main protagonists to the strength of Peronism but also -and a lot!- to that popular rejection that gave its punishment vote to the outgoing administration.

If you look at the numbers, these four years may outweigh the critical times of the 1990s and early 2000s in depredation. If, when Nestor Kirchner arrived, Argentina’s debt was around $170 billion dollars, last June external debts were at $283.567 billion: $7.819 billion more than a quarter ago, according to data from the National Statistics Institute cited in Argentine reports. That figure represents 80 percent of GDP! Almost the same as the country produces, because it has been in recession for three years.

The times for the cabinet of Alberto Fernandez are shortened if you take into account that for 2021 they will face payment deadlines of $38 billion of capital, and $16 billion in interest.

Kirchner, at the time, paid the Fund once and for all. He renegotiated with private bondholders, in transactions that meant important “removals” of Argentina’s debt.

Deputies of the Popular Unity Party denounced the outgoing president in court for having indebted the country for more than $100 billion dollars, and the fact that $86 billion of them have fled.

Upon filing the complaint, Claudio Lozano and Jonatan Baldiviezo accused him of the crimes of non-compliance with his duties as a public official and abuse of authority,. They estimated that “if we do not suspend payments, the debt could choke Argentina’s recovery.”

The weight of Macri’s external debt and the IMF’s persecution are not the only evils that the new government will have to fight economically.

An interesting article published in Página 12 by Alfredo Zaiat also points out the strong fiscal restrictions that have had to be implemented and will be against them. These include the exchange control implemented in the face of hit international reserves, weakened by the flight of foreign exchange; the weakened productive and labor scenario, the fall of the Argentine peso against the dollar (still at 63 to one) and the demands of trade and social sectors that have been hit hard by the crisis, such as teachers, scientists and state employees.

Fernandez knows where the core is to move the country forward. He hasn’t stopped working with a team of the Front for All since the good percentages obtained by his candidacy. With Cristina as vice-president, he announced that he would be the new head of state.

He has met with the provincial governors to ask for their support and also to demonstrate that he will govern by listening and counting on them. He has also spoken slowly with businessmen and industrialists, who have equally been hit by the macro crisis, to whom he gave guarantees of reactivation and asked for support.

The new government wants to return the workers’ salaries which had beenand fatten a little the slim pensions of the retirees; that there is no more need for soup kitchens, to improve access to education and health… And it has announced emerging social plans to alleviate that other macro debt: the one contracted with society.

The decision to incorporate two new ministries into the cabinet: Gender and Equity, and Habitat and Housing, illustrates where their paths go. This can also be seen in the announced Argentina program against hunger, and other social plans that will seek to provide a basic food basket to vulnerable households, and to guarantee potable water…

Those aspirations are a sign of how much citizenship needs. And the performance in the economic sphere on which many will depend; there everything is decided for Argentina today… or almost everything.