Home Fines Up to 3,000 Pesos for Littering

Fines Up to 3,000 Pesos for Littering

Since March in Havana, Fines of Up to 3,000 pesos for Throwing Debris Outside Established Sites 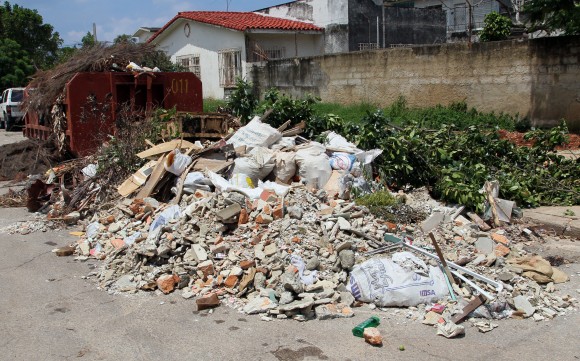 As of March, those who generate cadres like this in the Cuban capital will have to think about it and comply with the regulations of the local authorities. Photo: Ismael Francisco/Cubadebate

The provincial government of Havana, as part of the People’s Movement for a More Beautiful, Cleaner and Healthier Havana, has established that the state entities or families that carry out constructive actions in their properties are responsible for the final destination of the rubble generated. It must be deposited only in the sites defined for that purpose by the people’s councils.

As of March 1, this provision, in accordance with the City’s Ornamental Regulations, also establishes that the rubble may be deposited at the points defined by each people’s council, which will never coincide with the traditional points for depositing domestic waste.

In the case of residents in the municipalities of Central Havana and Old Havana, citizens and entities may contract the debris collection service to the Water Company of Havana.

In the remaining municipalities, this can be done by contacting the Provincial Direction of Hygiene, through the telephone numbers 7260-1440, Command Post, and 7260-3011, Commercial Department.

Violation of the rules may be subject to a fine of up to 3,000 pesos.

It is also established that each state or social entity is responsible for the permanent cleaning and beautification of its establishments, including its perimeter environment.

The structures of each people’s council, in close coordination and with the active participation of the CDR, FMC, CTC, ANAP and the Association of Combatants, will systematically develop mobilization actions aimed at maintaining cleanliness in the community, calling on families to deposit household waste at established collection points and during the hours of 6:00 p.m. to 10:00 p.m.

Those who violate this communal hygiene norm could be fined up to 1,500 pesos. Similarly, the person responsible for collecting the waste may be fined similarly if he or she fails to comply with it.