IPS in Cuba
Cuba Has a Guide to Address Sexual Dysfunctions

It was one of the results shared at the 5th Scientific and Methodological Conference of the state-run National Center for Sex Education.

At the conference, it was revealed that guidelines are available to care for those suffering from sexual dysfunctions and disorders in Cuba.
Photo: Jorge Luis Baños/ IPS

Havana, 22 February – What should a doctor tell and guide a man with erectile dysfunction or a woman with an orgasmic disorder? Until very recently, there were no practical guidelines in Cuba for dealing with this health problem.

Today there are guidelines for attending to those suffering from male and female sexual dysfunctions and disorders thanks to a research project carried out by the state-run National Center for Sex Education (Cenesex), explained physician Elvia de Dios Blanco.

From 2016 to 2018, a team of 12 specialists worked on the systematization of the theoretical-methodological references that support care for sexual dysfunctions and disorders in the world and in Cuba, as well as the preparation and evaluation of the guidelines, De Dios said at the 5th Scientific-Methodological Conference of Cenesex.

In the first stage, she said, guidelines were designed for disorders of hypoactive male and female sexual desire, female orgasmic disorder, premature ejaculation and erectile dysfunction, which are the most frequent requests for attention.

In the second phase, guidelines were drawn up for female sexual arousal disorders, pain disorders and vaginismus, as well as paraphilic disorders, he said at the meeting, held Feb. 20, where the institution’s scientific results were presented.

“The ones the one on erectile dysfunction, hypoactive disorder and female orgasmic disorderare published in the Cenesex magazine Sexología y Sociedad. For those pending publication, we coordinated with the Ministry of Public Health to train facilitators for each of Havana’s 15 municipalities, and then extend them to other territories,” she said. 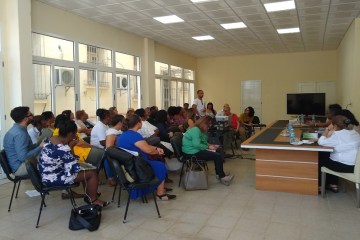 In her  opinion, medical professionals are better prepared for male sexual dysfunctions than for female ones, “because really women come very little, they have their problems and they stay with them and don’t come. That happens worldwide, not just in Cuba.

In the expert’s opinion, the Cuban guidelines differ “from the rest of the models that exist internationally in that they include sexual education in all sexual dysfunctions and specify the functions of the integral general physician as a gateway to the health system.

Doctors “must explain to people who seek care the human sexual response, its modifications in the different stages of life, with chronic diseases and with drugs,” he said.

Education, she insisted, involves making a 20-year-old diabetic man understand that if he doesn’t take his medication, when he is 40 he can develop atherosclerosis, because his fat metabolism is affected, his vessels become hard and blood doesn’t enter his penis.

The conference unfolded a full-day program, where other results and developments were presented.

The Cuban legislative schedule foresees the presentation to the National Assembly of People’s Power (unicameral parliament) of an amendment to the Public Health Law (Law 41 of 1983) by the end of 2020, with a view to moving away from the biomedical paradigm and towards a rights-based approach.

Jurist Ivón Calaña, head of the Legal Advisory and International Relations Department of CENESEX, explained that several groups of specialists are working on different proposals. One concern is that this law must be approved before the new Family Code (planned for 2021), which would leave out some issues, including the autonomy of adolescents in matters of sexuality.

One of the aspects that the health law would include is to clearly specify abortion as a right of women to voluntarily interrupt pregnancy, a procedure that has been available safely and free of charge for more than 50 years in the country.

If the current law referred to quality of health in terms of building care centers, developing the pharmaceutical industry and training personnel, the proposal takes a qualitative leap forward by privileging primary health care as the first level of care for individuals, families and the community in a comprehensive manner.

“From this change, the patient is seen as a subject of rights and duties, because there will be a legal relationship, typical of a service provision, like any other,” he said.

One of the areas analyzed is gender-based violence, which would allow the subsequent implementation of protocols for the care of victims, mainly women and children, she said.

The main advances in the area of sexual rights contained in the proposal of what would be the new Family Code were presented by Manuel Vázquez, deputy director of CENESEX, who is participating in the temporary group working on the text and has had as a good practice to conduct academic debates.

“That a Family Code is proposed, but rather than a name, it is a constitutional mandate in terms of plurality to recognize and protect all families, in all their diversity, regardless of the ways in which they are structured,” he stressed.

Among other aspects, the bill proposes the elimination of the exceptionality to contract marriage before the age of 18, the recognition of marriage and de facto union, the economic regime of marriage, the change of the term parental authority to parental responsibility, the procreational will and multi- and pluri-parenthood. (2020)