Home Falls Can and Should be Prevented

Falling is a geriatric syndrome, a disease; when it becomes recurrent it is clearly giving alarm signals that must be paid attent to. 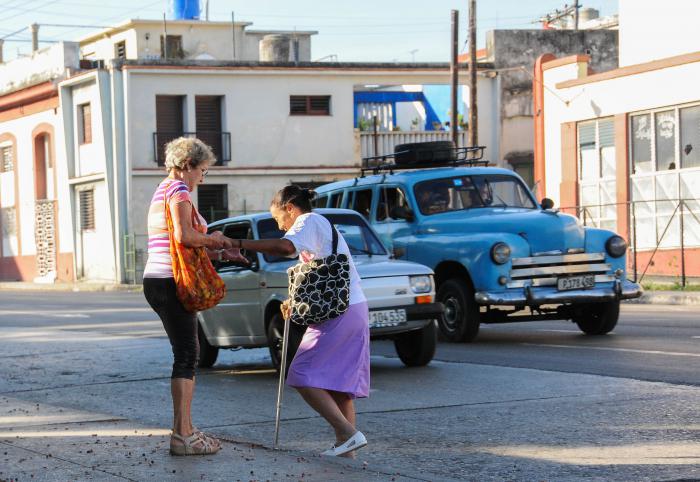 As we age we must adapt to the environment, which is often a challenge for the performance of activities of daily living, crossing streets, transportation, ant the footwear that is used, can cause of fractures on numerous occasions. Photo: Juvenal Balán

“It took human beings about five million years to learn to walk and only 70 years to fall. This, which humorously may be interesting, should not really be allowed, because falling is not a habitual state. Falling is a geriatric syndrome, a disease. In other words, not everyone falls, because there are people who reach the age of 90 without having suffered any event of this type.

This was explained to Granma by the doctor of the Argentine Association of Orthopedics and Traumatology and member of AO Trauma, Emilio Fantin. He emphasized the need to prevent falls in the elderly, an aspect that is not often thought of. For the expert, it is important not only to know what a fall is, but also to understand why we fall and to evaluate the old person who falls.

Participating in the Seminar AO Trauma “Traumatology in the Elderly”, which was held in recent days in the teaching Fructuoso Rodriguez orthopedic hospital, and included recognized experts from this organization, Dr. Fantin commented that if we take into account that 1 to 5% of falls end in fracture and almost all hip fractures are secondary to them, it is vital to talk about this issue.

After a hip fracture, between 20 and 50% of older people fall again within two to six months of the first fall, so that prevention is once again the key. It happens that of those who fall for the second time, approximately 12% have a new fracture and 5% a hip fracture.

According to the World Health Organization (WHO), there are a thousand hip fractures per million inhabitants. If this figure is taken to the aging population, it is considered that a thousand fractures occur for every 100,000 people over 60 years of age, which would correspond to 10% of this age group.

It is estimated that around 12,000 of these fractures occur annually in Cuba, with resulting costs that they imply for the patients, the family, the health system and society in general.

20.1% of the Cuban population is 60 years of age or older, as shown by data from the Center for Population and Development Studies of the National Office of Statistics and Information. According to the latest Population and Housing Census (2012), 40% of Cuban households are inhabited by older adults. In 32% of them reside up to two or three persons of 60 years or more, so it is very likely that an older adult is caring for the other, and 13% of older adults live alone.

WHEN ARE YOU AT RISK OF FALLING?

The fall causes worries from the first moment, but when it becomes something recurrent (two or more falls in the space of a year) is clearly giving alarm signs that should be addressed, warned the specialist.

At the same time,” said the interviewee, “we must pay more attention when patients tell us “I have no strength, I fall, what can I do?

In Dr. Fantin’s opinion, the first thing is to think that falls are not normal events, because the fact of being old does not necessarily imply falling. Why does it happen? It has to do with physiology and physical structure, loss of bone and muscle mass, and functions such as hearing and sight.

But these aren’t the only causes, he explained. As we age, we must adapt to the environment, which is often aggressive in carrying out the activities of daily living. The streets, the transport, the footwear that is used, derive in reason of fractures in numerous occasions.

With respect to the profile of the older adult who falls and fractures, the professor pointed out that generally they are over 80 years old, there is a poor self-perception of their state of health, cognitive deterioration, that is, of the state of consciousness, and many have depression. To this is added the presence of visual and motor deficits, because a large part of this age group needs help to walk, using walkers, canes or someone who accompanies them.

“Even if we investigate, we can find stories of falls that deny us, or do not tell because they are ashamed. It is very rare for an older person to confess to a child who has fallen. They come to the bathroom with the fracture, but they usually fall for longer: in the early morning when they go to the bathroom, for example. Falls can also be related to the consumption of certain medications and polypharmacy, which can cause fragility and gait disturbances due to unbalance,” he said.

When evaluating a patient at risk of falling, the expert commented that intrinsic and external factors must be taken into account, in addition to others that may precipitate this fact, such as alcohol consumption.

Among the intrinsic causes, diabetes is one of the most frequent, followed by the state of consciousness, that is, dementia, delirium, or depression. A third place is given to diseases where muscle mass decreases, and the fourth element is the female sex, since a greater number of falls occur in women than in men.

“More than four drugs a day are considered polypharmacy, and this is a cause of falls, so making adjustments to prescribed drugs is essential. The older adult is given a medication and it is never taken away, they leave it forever,” explained Dr. Fantin.

In addition, the interviewee pointed to osteoporosis, tobacco use (mainly in women) and vitamin D deficiency, as other elements not to be lost sight of. “Older adults don’t sunbathe regularly, and it’s important to get them out in the sun. The amount of ultraviolet light needed to convert vitamin D, either from the diet or as a medicine, is 10 minutes, you don’t have to go to the beach, and you just have to discover your hands and face.

The ideal,” he said, “is to treat these fractures within 48 hours of their occurrence, which has allowed mortality in the world from this cause to decrease from 30 to 10%.

Particular emphasis was made by the expert in post-cause syndrome. “Whoever falls and fractures is afraid of falling again and the great majority does not return to their previous state. Anxiety disorder is very serious, and there is a tendency to the syndrome called immobility, which can even lead to death. For each day of rest, 1% of body mass is lost,” explained Dr. Fantin, who placed great importance on family support.

It is fundamental that prevention also begins at an earlier age, stimulating, for example, exercises such as the use of bicycles, which are less expensive, ideal for recovering muscles, stimulating the semi-circular ducts of the ears and making it easier for people to have balance, concluded the interviewee.

– AO Trauma is one of the four clinical subdivisions of the AO Foundation (Working Group to Study Fracture Problems) created in Switzerland in 1958. Its purpose was the integrating and aligning of efforts in research, community development, and education in Traumatology and Orthopedics at the global and regional levels.

– According to Dr. Roberto Balmaseda Manent, secretary of the Cuban Society of Orthopedics and Traumatology, it has been particularly useful for the training and improvement of specialists in this branch.

– About 600 professionals from all regions of the country have had the opportunity to be trained step by step in the courses, workshops and seminars that the Society has organized.