Translated and edited for CubaNews
by Walter Lippmann. Oct. 20, 2017. 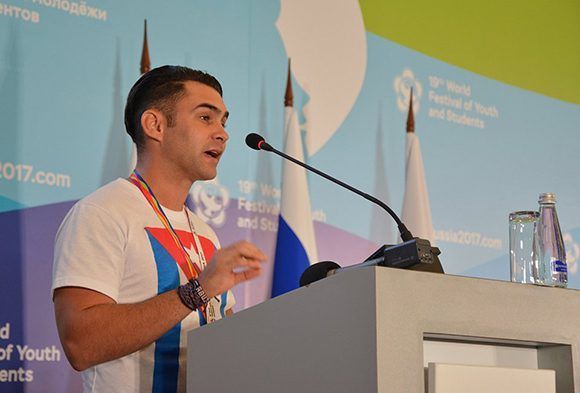 What can happen to the mind of a five-year-old boy who floats alone in the middle of the sea after losing his mother in a shipwreck? They say that he prayed to the Guardian Angel and that some dolphins dragged their raft towards the shore, but the opposite, away from his father and his true family in Cuba.

Little Elián González became a victim of the Cuban Adjustment Act. And at the same time, the key figure in the battle of a whole country [people] for his return. The shipwrecked child has become a 24-year-old revolutionary. He shared his story on Wednesday at the Anti-imperialist Tribunal, one of the core areas of the XIX World Festival of Youth and Students.

His history and the images of his return, in June of the year 2000, shook those present. Their voices united against imperialism. When he recalled his experiences, Elián could not contain his tears. Neither did the audience who heard his heartbreaking testimony in the first person.

Elián recalled how, as a victim of the Cuban Adjustment Act, he and his mother left Cuba illegally for the United States and the boat sank in the middle of the voyage. He maintained that the pain of losing his mother and being away from his father and his land, added to the violation of his rights and identity on American soil.

González  pointed out other factors condemning imperialism, such as the 60 years of blockade against Cuba, the main barrier to the country’s development. He traced the history of Cuba, listing deeds that should have been prosecuted and condemned, such as the mercenary invasion at Playa Girón [Bay of Pigs], orchestrated by the Central Intelligence Agency; the illegal presence on Cuban territory of the US Naval Base at Guantanamo and the crime of Barbados where they killed 73 people [a reference to the 1976 mid-flight bombing of a Cuban passenger plane.  The plane — containing all of Cuba’s young gold-medal winning fencing team  as well as adults, students and children from 5 other countries — was returning to Cuba from Venezuela.It was history’s first terrorist bombing of a passenger plane, organized and carried out by a team led by Cuban counterrevolutionary expatriates Orlando Bosch and Luis Posada Carriles with the knowledge of the CIA, led at that time by George Bush.]

At the end of his speech, on behalf of the heroic Cuban people, which he said would rather disappear than go down on its knees, he asked for a  condemnation of Yankee imperialism for all the human and economic damage it has caused.

Other voices from around the world spoke up at the tribunal, such as the young Saharaui Omar Hanesa, who maintained that in 1975 his country was under the dominion and occupation of Morocco, after two years of Spanish colonization. He also demanded justice for the crimes committed and demanded the release of political prisoners, sentenced to more than 20 years for organizing peaceful marches to defend the cause of his people.

Korean President Ri Cho Liu also spoke. He listed the damage caused by the US government’s economic blockade of Democratic Korea for more than 60 years in order to subdue his country.

The Tribunal became a space of unity to fight against imperialism by denouncing its crimes and proving that the young people of the world are willing to carry out the belief  that a better world is possible.