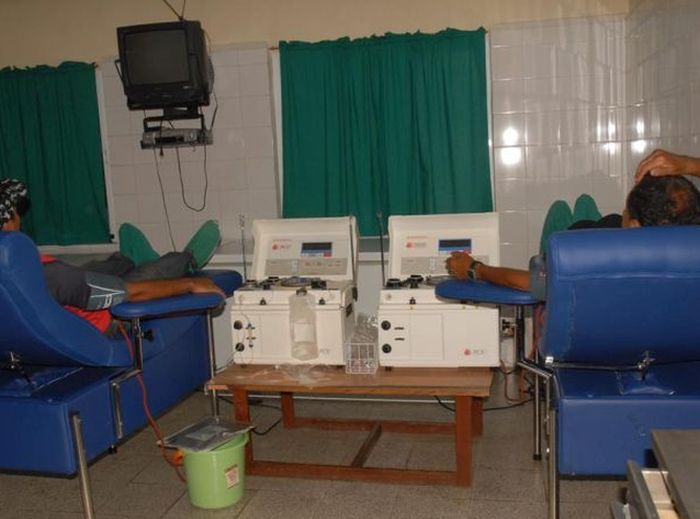 At the Sancti Spíritus Provincial Blood Bank, behind the desk of the receptionist, there is a poster that, rather than informing, generates noise, misinterpretation and, above all, segregation.

Seeking to explain the health requirements that a person must have to become a blood donor, the poster warns: “There are individual behaviors and actions the law does not prohibit, but that can be a disease-transmission risk among those who practice them. It is recommended that these people self-exclude, that is, they should abstain from donating their blood. Among these practices are: homosexuality, bisexualism, sexual promiscuity …”

This is worrisome because the fact that an institution belonging to the health sector expresses such misconception on the diversity of tastes, behaviors and inclinations of human sexuality is indicative of underlying discrimination.

According to Graduate Nurse Víctor González, Deputy Director of the Center, the Autoexclúyete Campaign seeks to guide the population on what health requirements they must have for their blood to be used. Thus, everyone should be able to tell whether they are eligible or not to donate blood. But, more than that, the poster reveals that at this workplace, in the 21st Century, several myths and misconceptions are still held.

Historically, homosexuals have been blamed for the emergence and spread of HIV. Several religions maintain that it is a punishment for going against nature. For years, however, science has been responsible for denying this and, although it is true that AIDS is more common in men than in women, it has also been shown that its spreading was linked to the widespread habit of not using condoms.

It is also known that in Africa –the geographic region where the disease began spreading– the first infections were among heterosexual persons. The truth is that AIDS has no face.

This wrong perception is also linked to the prejudice that the homosexual population is promiscuous. It is striking that, for the World Health Organization, a promiscuous person is “one who has more than two sexual partners in a year”. So the label fits homosexuals, bisexuals, heterosexuals, transsexuals and as many denominations as we would care to mention.

Rather than worrying about how a person finds pleasure, it would be advisable that the Provincial Blood Bank maintain its excellent work. To this end, there are some provisions –a sort of ABC– ranging from detection by primary health care services of those who wish and are eligible to donate blood, to the analyses of blood samples to corroborate the quality and type of blood, whoever the person is.

The real risks are not in what we are, but in the responsibility (or lack of it) with which we face our lives. Only free from stereotyped conceptions can we live in a more just and less exclusionary world.

10 Responses to “Donate blood, not prejudice”

Incredible, as I read it I do not believe it … and what role has played in all this by the administration of the blood bank that has allowed such a poster ?? … UFF … attitudes like these leave a lot to be desired …

Companions of Escambray:
With my mouth open I have been left to read the Public Health reply to this letter, published in today’s print edition. I had not really read the commentary from the journalist Lisandra Gómez and ran to see her on this medium. Why have not they put that reaction here already? I hope to see you soon and, if you can, to include this opinion below.

First of all I want to say that it is a very serious disrespect to the readers to send a press text so poorly worded. The lack of agreement, coordination in ideas and misuse of gerunds and other components of language are obvious. Incidentally, even the poster contains linguistic errors. And it has been there for years, according to them, without someone noticing not only the errors of form, but, above all, content!

The poster is very eloquent, well, it is enough to publish it alone, without comment, to realize that the letter sent by the sanitary authorities seeks only to protect itself from a correct criticism, but was eluded by them, since apparently they believe themselves infallible.

A few years ago, I think that in the middle of 2014, I read another similar reaction and I think it becomes worrisome that tendency to not accept the external valuations, more when in the eyes are mistaken.

I would recommend to those who wrote this document to contact the fellows of the Cuban Association of Social Communicators to give them a course on how to write, brainstorm ideas and, finally, communicate. I’m serious. So maybe they do not incur new mistakes other than that already denounced by the publication.

Finally I recommend you reread the letter of the companera Lisandra so that they realize that yes, they exclude instead of adding followers to the campaign of blood donation. And discriminate. The poster speaks for itself.

I, too, have been stunned by such a poster. If, as from journalism itself, we have tackled on other occasions, blood banks are rigorously analyzed before use, if Cuba is ever more advanced in methods and resources to ensure safe blood, if the fact that donations are made voluntarily contributes to that aspiration, what does the campaign of self-exclusion then respond to? Do they no longer have the necessary resources for a reliable quality test, or are they increasingly costly to the country and, therefore, is it expected that this measure will contribute to safer donations? This initiative is worrying, as well as others that have appeared in recent times, but are another matter.

And who says that heterosexual people with a single partner can not be carriers of HIV, one responds to their sexual behavior, but what about the couple? What else do you do if you are gay, bisexual, straight or trans, autoexclúyete discriminates more, if you want to prevent: rapid testing is a method to detect HIV / AIDS.

What a shame to find such promotional banners like these. Apparently, we do not agree on promotion and propaganda, as close as May 17 and the day against homophobia. Thanks to whatever, we have in the world a profession called “journalism” that criticizes, values and educates. Good post

What communicator and designer could participate in the conception of this campaign? That is discrimination, segregation, an outrage and use of faculties that no institution can tell people to EXCLUDE to donate blood. I have donated blood repeatedly and have never been asked such things.

And the blood does not undergo a rigorous analysis to know if it is optimal or not? Or just for the word of the donors is approved ???

Congratulations to the journalist Lisandra.

When I saw the misleading poster (let’s call it that), I wondered where they received the title that accredits them as health officials, those responsible for such nonsense (I included from who conceived the idea of the poster, who gave the campaign its name and even who approved it and put it on).

I came back to a country lost in geography (I think beyond the stone age) and I resisted thinking that in the country where I trained as a scientist there could be people so twisted, able to hide their homophobia and disguise it from ignorance, illiteracy, medical, epidemiological and other excesses that I prefer not to mention.

SELF-EXCLUDING !!! ??? but where it has seen similar and opprobrious nonsense !!! And such inadequate and erroneous arguments. Does this nurse not know about the very rigorous quality tests to which the donated blood is (donation by donation) before being released and declared fit for use? Or is that the hidden intention of “de-instruction” another.

Is it that we are going to return to a past that we have criticized so many times and that we have so often admitted the gravity of the mistakes made?

I wonder if there is a scientific advisor who reads what is going to be published in that institution or someone responsible for such nonsense to not be displayed on behalf of a health institution that is respected ?.

I am more relaxed if it is only a local initiative, wrong but perfectly correctable. If the evil has other dimensions, then it is still much more serious.

Thank you Lisandra Gomez Guerra for this article that expresses the feeling, concern and indignation of many who have wondered, baffled, if the program of Nursing Degree where our colleague Victor González graduated should be reviewed, completed or in case this Is optimal, then analyze the suitability of who holding a professional title acting as if it were not. THANKS also to the editorial board of this newspaper for putting objectivity and social justice on the side of reason.

I understand that my words may sound a bit strong and hopefully my opinion is not EXCLUDED (in the middle of this harmful campaign) to face the lack of objectivity and put the finger in the yaga of that old behavior that disguises homophobia with many masks and has made many bleed. THANK YOU!!

I am glad that people are as prepared as you to analyze and that response so admirable, because, without offending anyone, and without ideology trastocada, has said the greatest truth, that in these times there are still people with such reasoning and even worse that there is a leader a little analyst and prepared that he did not give a stop to this stupidity, thanks to the journalist that I hope that comment has not brought consequences as usual in our country.

I imagine that many are very worried about what is written on that poster, and others do not even count, it is not necessary to offend anyone if what is just read is enough to draw some conclusions, what a shame and then they say they know what they are talking about (I.e.

We will denounce it internationally. If I could file a lawsuit with that institution, I would … but we already know that we are unprotected.