In Cuba, science and innovation have been key factors in the development process and social justice objectives.

An inclusive Ibero-America, which takes into account the interests and development needs of all members of this Conference, can favor the advancement of our nations, stressed the President of Cuba, Miguel Díaz-Canel. 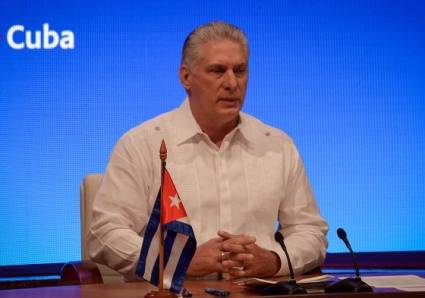 The legitimacy of a government emanates from the expressed and sovereign will of its people. Autor: Estudios Revolución Publicado: 21/04/2021 | 10:35 pm

Speech by Miguel Mario Díaz-Canel Bermúdez, First Secretary of the Central Committee of the Communist Party of Cuba and President of the Republic, at the XXVII Ibero-American Summit of Heads of State and Government, on April 21, 2021, “Year 63 of the Revolution”.

His Excellency Xavier Espot Zamora, Head of Government of the Principality of Andorra;

Please receive cordial greetings on behalf of the Cuban people and Government.

The efforts of the Principality of Andorra to organize this Summit and to give continuity to the work of the Ibero-American Conference, in the period that is coming to an end, under the exceptional conditions imposed by COVID-19, must be acknowledged and thanked.

Our congratulations and support to the sister Dominican Republic, next Pro Tempore Secretariat.

Cuba has experiences to show and attaches special relevance to the theme of this appointment: “Innovation for Sustainable Development-Objective 2030. Ibero-America facing the challenge of the Coronavirus”.

In barely a year, a devastating pandemic has worsened the living conditions of millions of human beings on the planet and caused the worst economic downturn in nine decades¹. In contrast, five years after its adoption, hardly any progress has been made in the implementation of the 2030 Agenda.

There is talk of the multiple crises generated by COVID-19, but some problems are dozens of years older.

Developing countries are burdened with the unbearable weight of a foreign debt that has already been paid a thousand times over, and some of them are also suffering the impact of unilateral coercive measures that violate international law and hinder their legitimate right to development.

Until a just, democratic and equitable international economic order can be established to address the root causes of inequalities and move towards the Sustainable Development Goals, these will remain a chimera for most of the world’s peoples.

Let us be honest. The current development paradigms cause poverty and exclusion of the majority due to their irrational patterns of production and consumption that, under the designs of the market, disdain the most valuable thing: human life and dignity.

An inclusive Ibero-America, which takes into account the interests and development needs of all the members of this Conference, can favor the progress of our nations.

Sustainable development demands political will, solidarity, cooperation, financial and technology transfers from developed countries and equitable access to these resources that takes into account accumulated inequalities.

The pandemic has laid bare an indisputable truth: health and social protection systems, education, science, technology and available material resources must be put at the service of all and not at the mercy of the narrow interests of a few. Regardless of ideologies, the State has a responsibility to assume in the use of resources associated with the life and well-being of citizens.

As I explained at the Ibero-American Summit in Veracruz in 2014, in Cuba, science and innovation have been key factors in the development process and social justice objectives. This premise, which is a fundamental part of the legacy of the historic leader of the Cuban Revolution, Commander in Chief Fidel Castro Ruz, has allowed us to face the current pandemic under the blockade.

A robust system of science and technological innovation with an advanced and efficient biotechnological and pharmaceutical industry, allied to the universal, free and quality health system, with highly specialized human resources, have made possible the Cuban response to the pandemic that seems to surprise some.

A little more than a year after the first cases of COVID-19 were detected in the country, we have five vaccine candidates, two of them, Soberana 02 and Abdala, in Phase III clinical trials and we hope to immunize the entire Cuban population before the end of 2021, with our own vaccines.

Our National Economic and Social Development Plan until 2030, aligned with the Sustainable Development Goals, gives a leading role to innovation and scientific research.

The links between government structures and the knowledge and goods and services production sectors have been strengthened to promote innovation for economic and social development, with emphasis on local development.

The Government of the United States, in the midst of the pandemic, brutally tightened the economic, commercial and financial blockade, and financed and supported dangerous acts of violence and disrespect for the law to promote social and political instability in our country. The Cuban people have responded by redoubling their proverbial resistance to the blow of creativity.

The campaigns of the U.S. Government to discredit and boycott the medical cooperation that Cuba offers have not tarnished our vocation of solidarity and cooperation: 57 medical brigades of the Henry Reeve Contingent have contributed to confront the pandemic in 40 countries and territories. Many of the members of this Conference have appreciated the high altruism of Cuban health professionals.

The legitimacy of a government emanates from the expressed and sovereign will of its people, not from the recognition of foreign powers. The Government presided over by the constitutional President Nicolás Maduro Moros must be respected.

It is unfair to blame the Venezuelan Government for the economic and social situation facing Venezuela, when the application of cruel unilateral coercive measures, planned and implemented by the United States accompanied by several of its allies, with the aim of causing suffering among the population, continues. These coercive measures promote emigration, a phenomenon about which some express great concern and could contribute to resolving its cause.

It would be useful and sincere to recognize that the U.S. design of intervention in Venezuela failed miserably and placed other countries that supported it in an untenable political and legal situation.

Those who claim to respect the will of the Venezuelan people and promote a political solution among Venezuelans should recognize that the Bolivarian Republic of Venezuela is a sovereign state, cease meddling and act with respect for the United Nations Charter and the Proclamation of Latin America and the Caribbean as a Zone of Peace.

On behalf of the Cuban people, I am grateful for the traditional support of the Ibero-American community for the just demand to put an end to the blockade against Cuba, as well as the signs of rejection to the arbitrary and unilateral qualification of our country as a sponsor of terrorism, by the Government of the United States.

Cuba maintains unchanged its policy of solidarity and international cooperation for the benefit of our peoples, and will never renounce the construction of a sovereign, independent, socialist, democratic, prosperous and sustainable nation, always ready to share, as a human heritage, the results of our experiences based on Science and Innovation.

Thank you very much to all of you.

Taken from the Report: “The Inequality Virus”, published by OXFAM on January 25, 2021 and available at: https://www.oxfam.org/es/informes/el-virus-de-la-desigualdad
Data provided by Citma’s International Relations Department.