With its ratification by a resounding majority of its citizens, Cuba gets the first Constitution in its history and one of the few in the world that explicitly supports the rights of lesbian, gay, bisexual and trans people.

But don’t tell anyone! 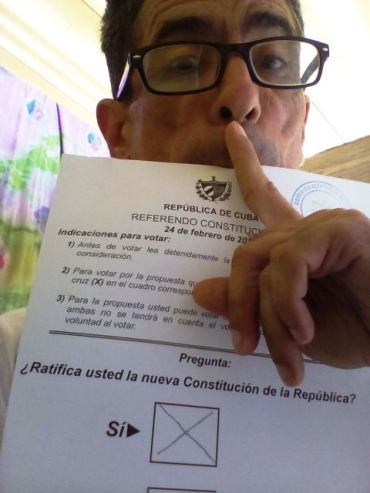 The new Magna Carta is the result of more than a decade of citizen and institutional activism for the sexual rights of LGBTI people, of progressive political and governmental work for comprehensive sexuality education, and of the growing overcoming of homophobia and transphobia among the Cuban population.

The contents that most directly express the gay-friendly character of the new constitutional text are:

It expressly proscribes and punishes by law discrimination based on sexual orientation and gender identity, among other grounds (Article 42).

It recognizes the right of everyone to found a family, and protects all families, regardless of their form of organization (Article 81).

It deletes the previous definition of marriage as the union between a man and a woman, and conceptualizes it only as a social and legal institution, and one of the forms of family organization, which is based on free consent and the equal rights, obligations and legal capacity of the spouses (Article 82).

This 2019 Constitution, more than a goal, then, is a starting point.

Great trials will have to be faced in the future, in particular the process of popular consultation and referendum on the draft Family Code. Within two years from the entry into force of the Constitution, the Family Code will have to establish the way of constituting marriage, among other issues that concern LGBTI people very.

The convincing success of the YES in the constitutional referendum that we have just held does not mean that the great majority of Cubans understand, respect or support our rights as lesbian, gay, bisexual and trans people.

On the contrary, the great lesson of the popular consultation and of some of the modifications that the draft Constitution underwent, as well as its interpretation, was that there are still many prejudices, much ignorance and even recalcitrant, retrograde and extremist positions in our population.

Such objections and resistances, deliberate or unconscious, do not exclude individuals or sectors that support the Revolution in other areas, and even occupy leadership responsibilities at different political or governmental levels of the country.

Nor does the defeat of the NO in the vote imply that among the minority that in one way or another showed its disagreement with the new Law of Laws there are no sensitive people, directly interested or sympathetic to the defense of LGBTI rights.

We will then have to promote, activate or recompose alliances, excuse grievances, appease hostilities and resentments, overcome disunity and strengthen strategies for working together among activists, organizations and institutions that advocate for free sexual orientation and gender identity.

It is also foreseeable that on this road towards the realization of such constitutional guarantees there will be controversies, conflicts and disagreements, including clashes and rebellions, questioning and injustices; advances, stagnations and setbacks, all of which should not discourage or discourage us from taking the necessary risks.

It will therefore be essential to deploy all our intelligence and responsibility, negotiation skills and capacity, maturity and political courage, so that we can ensure that this wonderfully advanced constitutional chrysalis spreads its multi-colored butterfly wings in specific laws that effectively regulate and guarantee our rights as LGBTI people.

I am , also known as Paquito, from Cuba; I am a Marti follower and an author; I am a communist and gay journalist; I am a convinced and superstitious atheist; I am the father of a son whom I have adored and have been a partner for fifteen years with a seronegative man who loves me; I have been an AIDS patient since 2003 and am a survivor of non-Hodgkin’s lymphoma for more than twelve years; I am a university professor and a student of life; a follower of Cuban economic issues and a passionate devourer of universal literature; an incontinent and belligerent moderate; a friend of my friends and a compassionate friend of my enemies; often wrong and never repentant; a hardened and eternal enthusiastic optimist; alive and kicking; in short, another ordinary man who wants to share his story, opinions and desires with you…

3 years ago Paquito, Translations0
Cuban cigarettesVenezuela Won the First Round